Using the DOS Command Prompt from Inside a VB Form

As some of you may have gathered, I am very inquisitive and always like to experiment with all my different (and somewhat strange) ideas. Today’s topic is no different. Today, you will learn how to display the DOS command prompt inside a VB form.

In Case You Do Not Know…

Some of you may not know what the DOS command prompt is. If you were to click your Start button and type CMD.EXE, you will see a screen similar to Figure 1. This is usually the first screen you see upon switching on your computer. 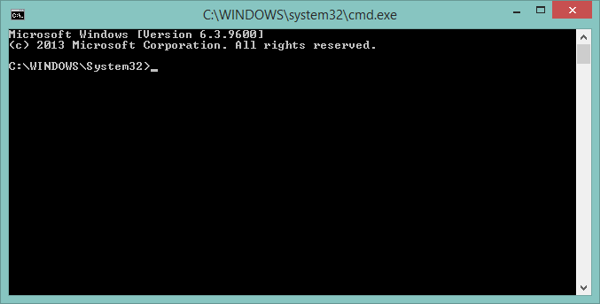 Before Windows, there was DOS: Disk Operating System. It didn’t have a graphical user interface (GUI) and you had to type commands to go to different directories, copy & move files, and delete files. Later, the DOS Shell was launched, making things a bit more user friendly.

I decided to use CMD.EXE here today because I thought it would be quite interesting as well as show you how to host an external app inside your VB Forms application. There is a lot of work today, so let’s get started.

Start Visual Studio and create a new VB Windows Forms application. You may name it anything you like. There aren’t any objects you need place on the form, but you may want to resize your form so that it is not too small.

Let’s start with creating the variable objects that we will be using throughout this Form’s Class:

These should be quite self-explanatory, but just in case you are very new to VB, let me explain what I have done here. The first two objects are dynamic TextBoxes. The last object is a dynamic button. Now, the only difference between a normal textbox, for example, and a dynamic textbox is that the latter gets created dynamically; in other words: upon run time. That is why you didn’t have to add objects to your form’s design. More on this later.

Add the following to the General Declarations section:

Here, I have created a delegate sub procedure that will handle the updating of text written to the command prompt window. If you haven’t heard of delegates before, have a read through this article: http://www.codeguru.com/net/delegates-and-vb-net/.

Because we created the Textboxes and Button dynamically, we obviously have to create their associated events dynamically, too. Not only that, we also need to set their various properties dynamically. This is what happens inside the Form_load sub. I set the properties for the Textbox; then, I add a dynamic event handler to the textbox. I spawn a new thread, which functionality I will add now, and start the thread.

Let’s give the thread its purpose:

The Prompt sub procedure launches the CMD.EXE window and sets some properties such as in which folder to start the prompt as well as setting up the process object so that it does not interfere with the Windows Form’s process. For more information on the Process object, have a read through here: https://msdn.microsoft.com/en-us/library/system.diagnostics.process%28v=vs.110%29.aspx.

This is the delegate you had created earlier. What happens inside the UpdateText sub is the following:

Now, sending a command to this window is as simple as typing a character, so there is nothing special needed. Add the following sub:

This displays what you have entered inside the DOS window.

If none of the above is pressed, it should know what characters are allowable and interpretable.

When the Form is closed, the StreamWriter object should be disposed of from memory.

I have attached a working sample with this article.

I hope you have enjoyed today’s article. Until next time, cheers!

Read more
Previous articleMicrosoft HoloLens: How Real Is It?
Next articleWriting Your Own MVC Helpers