Welcome to my article. Today I will demonstrate what delegates are and how to use them to call managed code and unmanaged code.

A delegate is simply a type that represents a reference to physical methods with the same parameter list and return type. OK, what does that mean in simple terms? A delegate is basically a substitute for a method with the same return type and with the same signature. We make use of a delegate when we cannot access certain threads directly (as explained in this article), or when we need to ensure that managed and unmanaged code can be executed properly. 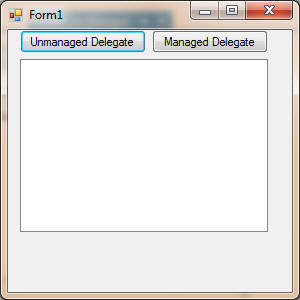 Add the Function to handle the Unmanaged code’s execution:

The DisplayRunningApps function displays the captions of all active windows and adds each to a StringBuilder object, which ultimately gets added to the ListBox. Add the following code behind the button labelled “Unmanaged Delegate“:

Voila! You have now successfully called unmanaged code through a delegate.

Add a class inside Form 1 and give it a method to be called from Form 1:

This small example will just show how to use a delegate to call managed code from a separate class. Now, add the following code inside the button labelled “Managed Delegate“:

Here, I instantiate the class we created above, and make use of the Invoke method of our delegate to execute the appropriate code. This code simply produces a MessageBox that says ‘Hello‘.

Short and sweet.  I hope that you have benefited from this article and that you will put your knowledge of delegates to good use. Until next time, cheers!