There are times where you first have to compare different ways of achieving the same goal. Using threads or backgroundworkers basically do the same thing, but, only if you use them right. Today, I will show compare unsafe threading calls to backgroundworker calls.

If you have never heard the term “Threads” before, let me explain. Any application makes use of threads to either show you information or a screen or to allow for long running tasks to complete. Now, threads are tricky and data is tricky. Sometimes, you will encounter a situation that may possibly freeze your application due to a long running task. So, instead of slamming all the code into one form, you have several threads. Each thread can run independently without affecting any other threads or user process.

Here is more information regarding threads.

A BackgroundWorker object allows you to run an operation on a separate, dedicated thread. Similar to threads, time-consuming operations like downloads and database transactions that can cause your user interface to hang can be properly managed by running in a separate thread.

Here is more information on the BackgroundWorker class.

Let’s Do a Project

The aim of this project is to show you how to use threads to make unsafe calls, safe calls, and use a backgroundworker to make safe calls.

Create a new Visual Basic Windows Forms project and add another form to your project. Both forms should look like Figures 1 and 2: 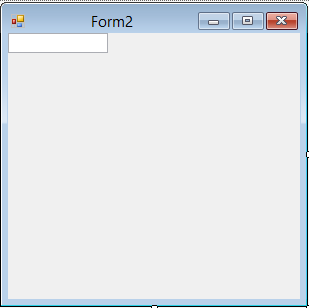 All of the code will take place on Form 1. Add the following namespaces:

These namespaces allow us to work with threads.

Add the following variable objects to your code:

Here, I created a delegate procedure named SetTextCallBack, which we will later use with a thread operation. I created a thread object named demoThread as well as a Backgroundworker object. The following objects are simply controls that you will access through code.

If you look closely, you may be able to see the subtle, yet big, difference between the preceding two code segments.

Add the following code for the Backgroundworker:

Using threads properly or using BackgroundWorker objects can speed up your application’s performance and reduce freezing of applications. Although the above coding samples were used on simple operations, the long term effects in your application’s speed will be tangible.