Working with the Cursor Object in Visual Basic

Welcome to my article. Today, I would like to talk about the Cursor object and how you can utilize it properly from your Visual Basic program.

According to MSDN, a cursor is a small picture whose location on the screen is controlled by a pointing device, such as a mouse, pen, or trackball. In the remainder of this overview, the term mouse refers to any pointing device.

Before going into depth about the cursor object, I need to speak about some of the background technology used. This technology is known as the Windows API.

Now, What Is the Windows API?

The term API means Application Programming Interface. Any good program exposes some sort of API that can be used in other applications. Windows is no different. You have to remember that, in running Windows, you are indirectly executing code exposed by the Windows Operating System.

A simple action, such as opening a file, executes the desired functionality needed for the file to be run. Copying and pasting is also an example.

Then, you get the functions that run in the background, which you usually do not have to care about: keeping track of memory usage, obtaining a list of running programs. I can go on.

Where Are These APIs Stored?

The Windows system, or any system for that matter, is made up of a bunch of files, called DLLs amongst others. The term DLL means Dynamic Link Library. These files are dynamically linked with the Operating System to run the program associated with it.

The methods of the programs are locked away in these files, and these methods make your applications work.

Now, to get back on topic. We need to make use of the specific methods inside the specific Windows DLL files to do some nice stuff with the Windows Cursor. 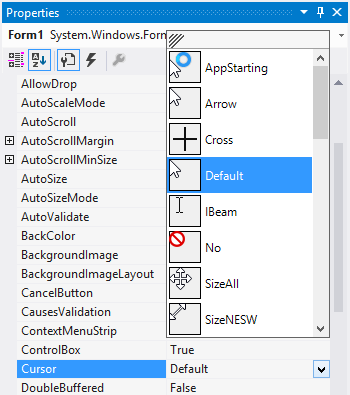 Add the namespaces necessary for the Windows API as well as to be able to read files:

Add the next Function:

Add the following code behind a button’s click event:

Hiding and Showing the Cursor Object

Hiding and showing the cursor is quite easy. All you need is the ShowCursor Function that is created in the following example:

In the next example, I will show you how you can constrain a cursor to only the form’s borders. This means that it will be impossible to move the mouse pointer outside the form’s bounds. Add the following code:

With a combination of these functions, you will be able to constrain your mouse pointer, and then restore it.

Today, I have shown a few interesting tricks on what you can do with the simple Mouse Cursor. Until next time, bye!

Read more
Previous articleThe Down and Dirty Guide: Async and Await in C#
Next articlePostgres Tricks in .NET