In the past, I have written quite a few articles on how to work with SQL Server and Visual Basic. ADO.NET has some built-in features that can make SQL Server work even better with Visual Basic. A prime example would be the SqlBulkCopy command, which you will learn about today. ADO.NET has made our lives so easy!

ADO.NET separates data access from data manipulation into different components that can be used separately at the same time. ADO.NET includes data providers for connecting to a database, executing commands, and retrieving results. These results can either be processed directly or placed in a DataSet object that gets exposed to the user.

SqlBulkCopy lets you bulk load a SQL Server table with data from another source. This means that it copies (in bulk) data from another source into an SQL database table. When dealing with large amounts of data, there are always a few options available to insert data quickly. You could write a Stored procedure that encompasses the INSERT logic, you could try to do it manually, or you could use the SqlBulkCopy .NET Class.

The SqlBulkCopy class inserts the data faster because it doesn’t have to jump back and forth with the Insert statement requests that keep being sent. Because of less cluttery communication with the SQL Server, SqlBulkCopy helps in entering vast amounts of data quickly.

The SqlBulkCopy class is similar to SQL Server’s bcp utility, except for the fact that it is built-in to the ADO.NET language instead of being a separate tool.

In the project that you will create next, you will make use of the SqlBulkCopy method in two different ways: One to simply copy a large volume of information to a Table, and another to do the same but do it by using a Transaction. Lastly, you will use the SQL INSERT statement to insert information. 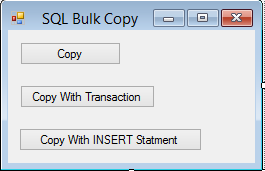 Add the following Imports statement above your Class declaration to import all the necessary SQL capabilities from the SQLClient namespace:

The BulkCopy Sub creates a new SQLCommand object that obtains all the records in the desired table to copy from via an SQL query. It opens the connection and creates a dataReader object to read the information obtained. An SqlBulkCopy gets created and the Destination Table name gets specified. The WriteToServer method of the SqlBulkCopy object copies the information from the DataReader into the destination table. Afterwards, all the objects get closed.

Add the next code:

The BulkCopyTrans Sub is very similar to the BulkCopy Sub. The difference is that BulkCopyTrans creates an SqlBulkCopy object with the ability to use a Transaction whilst copying. If you do not know what an SQL Transaction is, this article will be helpful. You could have a look on MSDN for a better understanding of the SqlBulkCopyOptions enumeration.

This code in the btnInsert_Click event inserts the data into the desired table through the use of the conventional INSERT FROM SQL statement.

Having a decent knowledge of what Visual Basic can do with SQL is very important for any new developer. Knowing how to make use of Transactions quickly can enable you to work with SQL queries more productively in any work environment. Go ahead and see if you can explore more hidden gems like these in ADO.NET.