Hello and welcome to today’s article. Today, I will show you how to change the input language dynamically.

With Globalization, you can make your application useable with any culture, irrespective of their language.

Here are some more articles on Globalization:

Localization allows you to customize your application according to a certain culture. Let’s do a small project!

Design your application to resemble Figure 1. 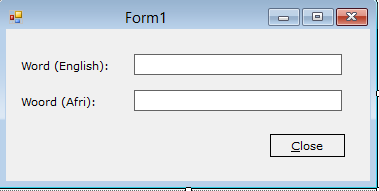 Set the Tag property of each of the Textboxes to languages of your choice. I chose English and Afrikaans (which is my native language).

As usual, add the Declarations first:

These constants will help identify which languages we want to use. Obviously, you may use your own languages.

Add the following piece of code to dynamically change your input type to a different language, once the focus has been set to either one of the textboxes:

All that happens here is the following:

Here is some more information on InputLanguage:

Here is some more information the CultureInfo object:

I have attached a working sample along with this project for you to play with.

Thank you for reading my article. Until we meet again, this is me signing off. Bye!