I don’t need to tell most of you how important serialization is in your programs. If today is the first time you come across the term Serialization, I’d suggest reading here before continuing.

We will be using a very basic design, have a look at Figure 1, and design your form similar to it. 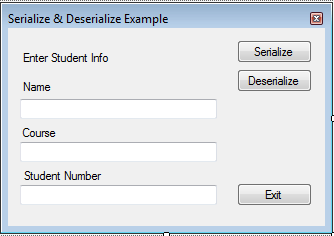 I decided that instead of serializing basic tidbits of data, to throw a spanner in the works and demonstrate how to save real objects created from code. For this demonstration we will create a new class called clsStudent and give it some properties. These properties will be the information we will serialize. Let us add a new class now, and edit its code.

The above member variables will be used in conjunction with our class’ properties (which we will add now) to get and set their values. Let us add the Properties now.

You can probably tell what the above code does. We simply give our Student class some properties. These properties include StudentName (for the Student’s name), StudentCourse (what course the student does) and StudentNumber (the student’s student number).

We need to connect our student class, and from there populate it with our form’s controls. Finally, we must serialize and deserialize the entered info.

frmSD ( or However You Named It )

We created a new clsStudent object, and populated it with whatever data was entered into the textboxes. Note, if you have named your objects differently, you will have to compensate for that in your code.

We then created a StreamWriter object, which will create our file on the C drive, called StudentInfo.xml.

We created an XmlSerializer object that will facilitate in the serializing of our data. Lastly we wrote our entered data, and closed the file.

Let us add the Deserialization code:

Same principle as the serialization, but we just load the info with the help of the Deserialize method of the XmlSerializer object and load the info into our textboxes.

If you run your project now, you will be able to save your entered data, and then load them. I am including the source files below.

As always, (you may say that I sound like a broken record sometimes – blame it on my O. C. D.) I hope you have enjoyed this little article, and that you have learned something from it. Until next time! Cheers! – I always say that too…

Read more
Previous articleMicrosoft Build 2013: Day One
Next articleTech IQ: As a Web Developer, do you know enough to build a Windows 8 apps?