Getting Started with Roslyn

Welcome to today’s article. Today, I would like to introduce you to the .NET Compiler Platform, known as Roslyn.

Roslyn is the codename for the .NET Compiler Platform. This platform is a set of code analysis APIs and open-source compilers for Visual Basic.Net and C#. Roslyn enables building code analysis tools with the same APIs that are used by Visual Studio.

As quoted from Roslyn’s Wikipage:

The .NET Compiler Platform (“Roslyn”) exposes a set of Compiler APIs and Workspaces APIs that provides rich information about your source code and that has full fidelity with the C# and Visual Basic languages. The transition to compilers as a platform dramatically lowers the barrier to entry for creating code focused tools and applications. It creates many opportunities for innovation in areas such as meta-programming, code generation and transformation, interactive use of the C# and VB languages, and embedding of C# and VB in domain specific languages.

Step 1: Download the latest version of Visual Studio. In a later article, I will explain in detail how to do this.

Step 2: Roslyn can be found on GitHub. Simply download the zip file to a specified location on your hard disk. Once the download has completed, extract it to a folder of your choice. It unfortunately takes a while because the zip file is quite big.

Step 3: Depending on your version of Visual Studio, you have to download its associated SDK. In my case, I have Visual Studio 2015 RC installed. 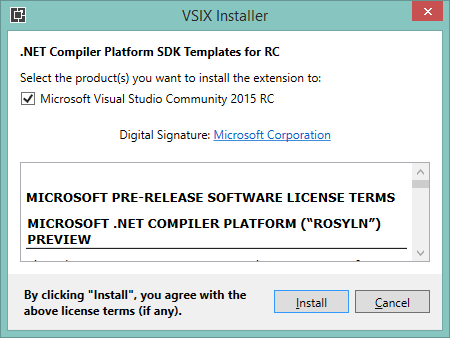 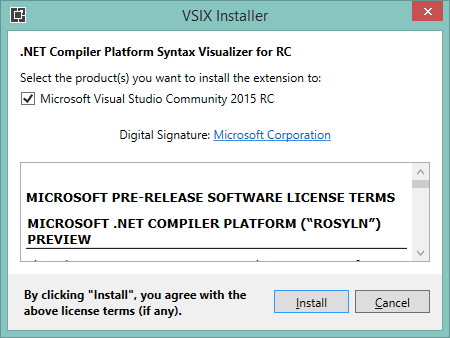 Roslyn should now be installed. You may also want to have a look into the zip file’s contents that have unzipped earlier. Inside, you will find the samples under the docs folder as well as Roslyn.sln and RoslynLight.sln. RoslynLight.sln represents the source code buildable in the latest public release. Roslyn.sln represents all of the source code.

When you open Visual Studio RC, you will immediately see the Roslyn improvements, which include the following:

Another feature that I have begged for a long time to have is the ability to include a Region inside a method. Here is how you would be able to implement it:

Having to check for NULL values, or values that are Nothing, has always been a pain for me, and I believe many a fellow VB. Developer. This operator makes it easy to check for null values in objects. Here is an example of its implementation:

This is not my favorite feature, but it is new. You will be able to split string literals over multiple lines. Here is an example:

Now, for a guy who has used VB since forever, I am not entirely happy with this. I still love my concatenation….

Now, this I love!

We, as VB developers, have been accustomed to using expression placeholders in our strings. With String Interpolation, using an expression inside a string has become much easier. Here is an example:

In olden days, it was impossible to add a comment inside a LINQ expression and in-line continuations. Now, this is impossible no more because the following will be allowed:

Now that you know how to install Roslyn and how it works, you can explore the world of Roslyn further by keeping a close eye on GitHub for more improvements. Until we meet again.

Read more
Previous articleUsing C# to Find Out What Your Computer is Made of
Next articleIf You Like It, Put an HTML5 UI on It