I have said once that we are living in exciting times; well, we are indeed. With the dawn of the fourth industrial revolution upon us, life just got better! How? With Microsoft’s Bot Framework, which is the topic I would like to talk about today.

A bot, or Web robot, is the most common bot system. A Web robot is an application that can run automated tasks. These tasks are usually structurally repetitive and bots can perform these tasks much faster than humans. Because of the speed at which bots can perform tasks, they can also be implemented where response speed is faster than how a human can respond and process information.

Bots also can be used to emulate human activity. An example of this is a chat bot similar to IRC and IM. Bots also have the ability to mimic human conversation. Wikipedia explains bots much better than I can.…

Getting Started with the Microsoft Bot Framework

To use the Microsoft Bot Framework Connector, you should have the following:

This API can be used to create a bot that is a very straightforward REST (REpresentational State Transfer) interface that is accessible from any language that can form an HTTPS request. The calls to this API need to be secured with an Azure key (Ocp-Apim-Subscription-Key) and pass your AppSecret and AppId via HTTPS as your username and password.

You can find the Bot Connector REST API here. 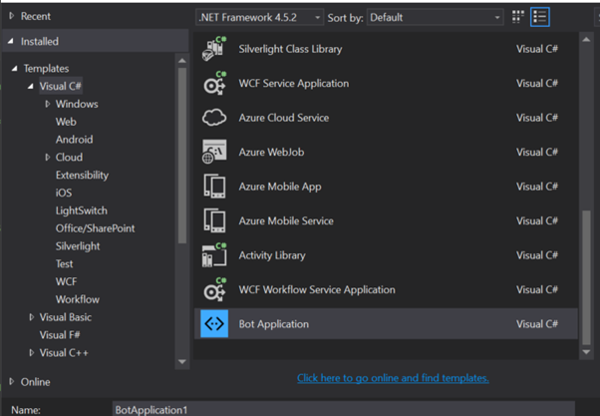 The BCS (Bot Connector Service) includes a node module that makes it easy to send bot-originated messages to the service. This module is needed only when a bot wants to initiate a new conversation with the user or wants to send a reply at some point in the future.

You should now at least have a good understanding of what options are available to you when creating a bot. Let’s get a bit more technical

Ultimately, your bot will receive Message objects to communicate. Here is a breakdown of the most common Message types that your bots will use to communicate.

You can configure the following optional features when configuring your Bots:

Here, you can configure:

Listen to all messages

You also could specify the Translation Behaviour and the Bot Publishing options.

A message is used to communicate between a user and a bot. When you send a message, there are a number of properties that you can use to control your message and how it is presented to the user when received. These options include:

Before ending off this article, I would like to point to the following, which shows you how to create a bot and follow all the steps to get your bot published:

This is only the beginning. I cannot wait to see how the Microsoft Bot Framework will evolve and what it will evolve into in the next few years. I guess we will just have to wait and see. Until next time, cheers!