An Overview of Microsoft Bing Bots

A bot, or Web robot, is the most common bot system. A Web robot is an application that can run automated tasks. These tasks are usually structurally repetitive and bots can perform these tasks much faster than humans. Because of the speed at which bots can perform tasks, they also can be implemented where the needed response speed is faster than how a human can respond and process information.

Bots also can be used to emulate human activity. An example of this is a chat bot similar to IRC and IM. Bots also have the ability to mimic human conversation. Wikipedia explains bots much better than I can…

Microsoft Build is an annual conference held by Microsoft that is aimed towards software engineers and Web developers using Windows, Windows Phone, Microsoft Azure, and other Microsoft technologies.

Microsoft Build 2017 introduced a few changes to its Bot Framework. These changes include the following:

Build a payment-enabled bot and streamline the checkout process.

Cortana is extended via Cortana Skills, which allows bots created via the Bot Framework to be published to the Cortana Channel as a new skill.

The Bot Framework has added support for speech throughout the platform.

All aspects of documentation for the Bot Framework have been updated, including new articles, a more intuitive layout, and integration into the docs.microsoft.com infrastructure for a uniform end-user experience.

The process by which bots connect to channels has been reworked to allow better integration and fidelity on a channel-by-channel basis.

The next iteration of the Azure Bot Service will provide a one-stop-shop development experience.

Following Microsoft’s annual Build event earlier in May, Microsoft has announced a few new features in their Bing search engine. Bing will now support chatting bots. Microsoft’s Bot Framework bots are directly integrated into all Bing search results whenever it is relevant. These bots that meet all the Bing Channel requirements are directly launchable on Bing and available on any browser.

To discover bots in Bing, simply type in a search phrase followed by the word bots into Bing.com’s search area. In Figure 1, I have typed in the phrase “news bots” into Bing, and it took me to the getnewsbot Web site. Here, it showed me how to add this bot to my browser, which is Chrome: 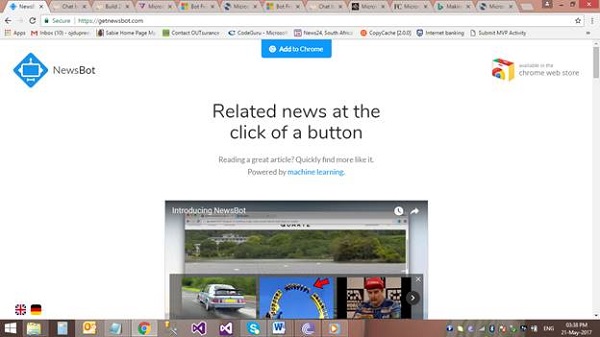 In Internet Explorer, I have typed in “Travel Bots“, and navigated to the first item in the list, as shown in Figure 2. 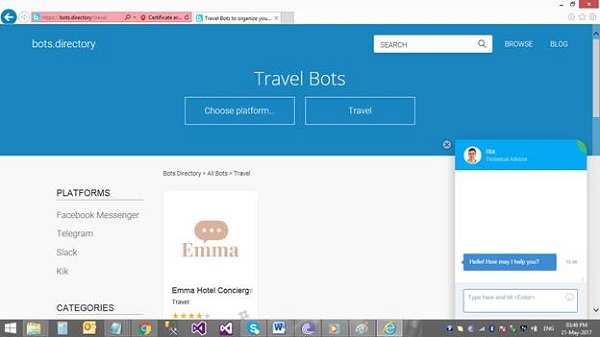 By the looks of it, Microsoft seems to be favoring their products more when it comes to Bing bots. In Figure 2, you clearly can see which platforms are supported (Facebook, Telegram, Slack, and Kik). It lists existing bots that you can install very quickly, and there is even an online chat option.

Bing Bot categories include the following: 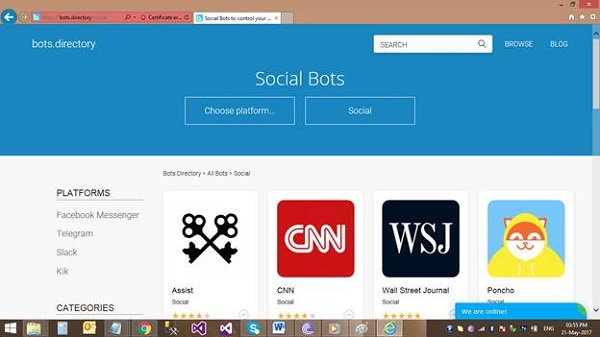 The Bot Framework includes Bot Builder to give you the tools you need to develop bots. Bot Builder is an open-source SDK with support for .NET, Node.js, and REST.

The Microsoft Bot Builder SDK provides just what you need to build and connect intelligent bots that interact naturally wherever your users are talking, from text/SMS to Skype, Slack, Office 365 mail, and other popular services.

Publishing Your Bot on Bing

Publishing a bot on Bing is easy. Open the bot on the Developer Portal, click the Channels tab, and then click Bing.

Microsoft keeps moving the benchmark of technology. With Bing Bots, chatting becomes easy and finding information is much quicker.

Read more
Previous articleIs the Open Source You Use a Security Risk?
Next articleTypeScript for the C# Developer: TypeScript Classes and Interfaces