Letters form words. Words form sentences. Sentences form paragraphs. Paragraphs form books. Books form libraries. Each language makes use of its own letters and symbols, but each language does have similarities when it comes to writing.

Each language contains vowels and consonants and basic language elements. Each language also contains “special” sentences or words. Today, I would like to introduce to you the pangram and how to test whether a sentence is a pangram in your .NET applications. Obviously, there are many more “special” words and sentences, and I will give a little background on those that I know of as well.

The word pangram comes from the Greek phrase: pan gramma, which means “every letter“. A pangram (or holoalphabetic sentence) is a sentence that makes use of every letter of the alphabet at least once.

The sentence “The quick brown fox jumps over the lazy dog.” is the best known pangram and is usually associated with displaying font styles. The sentence has actually been used since at least the late 19th century. Some pangrams make less sense as people try to use only the 26 letters of the alphabet. The longer the pangram, the more it makes sense; the shorter, not so much. Here is an example of both:

Jim quickly realized that the beautiful gowns are expensive.

The word lipogram comes from the Greek phrase leipográmmatos, which means “leaving out a letter.” A lipogram is a type of constrained writing in which a particular letter or group of letters is avoided. Albert Ross Eckler Jr. rewrote the famous poem “Mary had a little lamb” a few times with each time omitting a crucial letter, as seen next:

An anagram is a word, phrase, or sentence formed by rearranging the letters of a different word or phrase, while using all the original letters. Some examples include:

An isogram (non-pattern word) is a word or phrase without a repeating letter. A few examples follow:

A heterogram (different written) is a word, phrase, or sentence in which no letter of the alphabet occurs more than once. Some examples:

There are more “special” words, phrases and sentences like the following:

The aim of today’s little project is to determine whether or not the text input makes a pangram. It will also show the letters that have not been used.

Open Visual Studio and create either a C# or a Visual Basic.NET Windows Forms application. Design your form as shown in Figure 1. 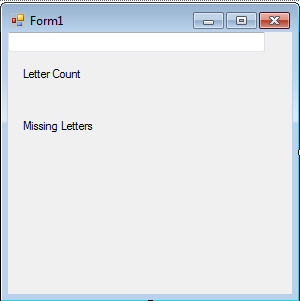 The form contains one TextBox and two Labels. The labels’ Text will be changed once the program is running.

Import the System.Text namespace to work with StringBuilders:

Here, you create objects to hold the English alphabet, punctuation marks, and create the StringBuilder object that will hold the pangram.

You created a new StringBuilder object to hold the letters still needed to complete the pangram. You then changed the case of the pangram to all uppercase and replaced any punctuation marks with an empty string.

In the For Each loop, you determined which letters are still needed to complete the pangram and display them on the label named lblMissing.

Figure 2 shows the program in action. 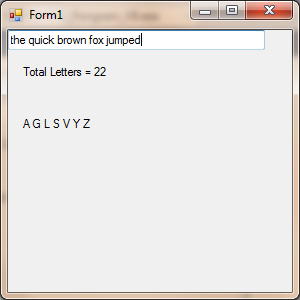