My previous article covered the basics of CLR integration in SQL Server 2005. It compared CLR inside SQL Server 2005 with TSQL and extended stored procedures, and discussed the judicious use of CLR in lieu of other available choices. This article takes the discussion further, discussing how to write various common database objects in CLR.

You can author a number of objects using CLR and host them in the database:

Wheres describing every detail about each object mentioned above probably is beyond the scope of one article, a canonical example will help explain the main steps involved in using and creating a CLR object inside SQL Server 2005. This article demonstrates a TVF that accepts a number and then returns all numbers that the passed-in number is divisible by. Thus, if you pass in 2, you should get 1 and 2, and if you pass in 20, you should get 1, 2, 4, 5, and 10. Along the way, the article also demonstrates the debugging of SQLCLR code using both SQL Server projects and a simple class library project.

A TVF, as the name suggests, is a function stored inside SQL Server that returns its results in a tabular form.

In an enterprise development environment, you probably will have to write deployment scripts instead of a point-and-click deployment anyway, so this article describes both approaches. First, you must set up a guinea pig database that you will write and run all your code against. Do this with the following simple TSQL command:

With the database set up, take the following steps: 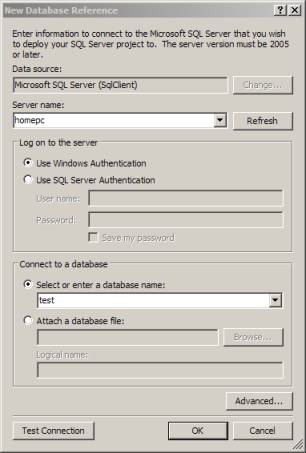 Note that “homepc” is the name of the computer my database resides on. In your case, it may be different. Finally, your “Add Data Reference” dialog box should look like the one shown in Figure 2. 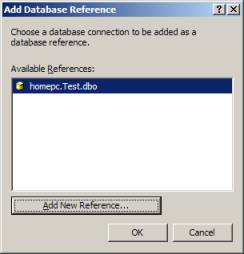 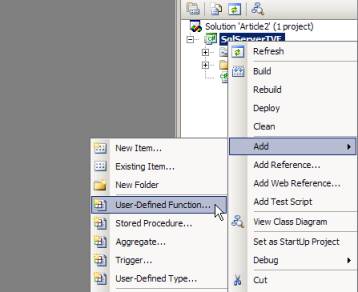 If you are using a class library project, or if you want to deploy the DLL generated out of the SQL Server project by hand (say, in an enterprise development environment), you may instead use the following TSQL script:

You may need to modify the location of the DLL depending on where you created your project.

This should produce the output in Figure 5.

If CLR is not enabled on your database, you may get the following error message instead:

You can easily fix this problem by running the following line of code against your database to enable CLR:

For any reasonably complex code, you absolutely must be able to debug it. Thus, it makes sense to look at debugging your TVF next.