For decades, MySQL, and its later fork MariaDB, have been a go-to solution for developers looking for an easy-to-use zero-cost relational database solution for their applications. Many pre-built database-driven applications come with built-in support for MySQL. It is only natural that Python can almost seamlessly work with this database server and this article will demonstrate how a beginner can get started doing so in this Python programming tutorial.

The code examples presented in this tutorial use Python 3 running on a server named allium-unus (Latin for “another one”, at least if Google Translate got it right) running Ubuntu Server 22.04 LTS.

MariaDB is a widely-used fork of the wildly popular free and open-source MySQL database. It uses its own variation of SQL. MariaDB uses both a username and password system, as well as a trusted user authentication system (known as unix_socket authentication) for access management. MariaDB runs on both Windows and Linux, as well as many other operating systems.

Python communicates with MariaDB using a module named mysql.connector. MariaDB and MySQL include a command-line tool that allows for management of the database; however, there are zero-cost graphical tools, such as HeidiSQL, which can also be used for database management.

How to Configure MariaDB for Python Development

Below, we will detail how to configure MariaDB for development environments on both the Linux and Windows platforms.

If the installation was successful, then the output of the last command above would look similar to this:

Upon a successful installation, there are Linux-specific post-install configuration steps, which will need to occur. Note that for this demonstration, unix_socket authentication will not be used, because the programming examples will not work with Windows. This is not to say that unix_socket authentication is a bad thing, but rather, that the goal of this Python tutorial is to present a relatively platform-neutral introduction to MariaDB and Python. The security needs of a specific installation and use case are a different topic entirely.

The command to perform this post-install configuration is:

The image below shows the answers to the security questions that will pertain to the coding demonstrations shown further below in this tutorial: 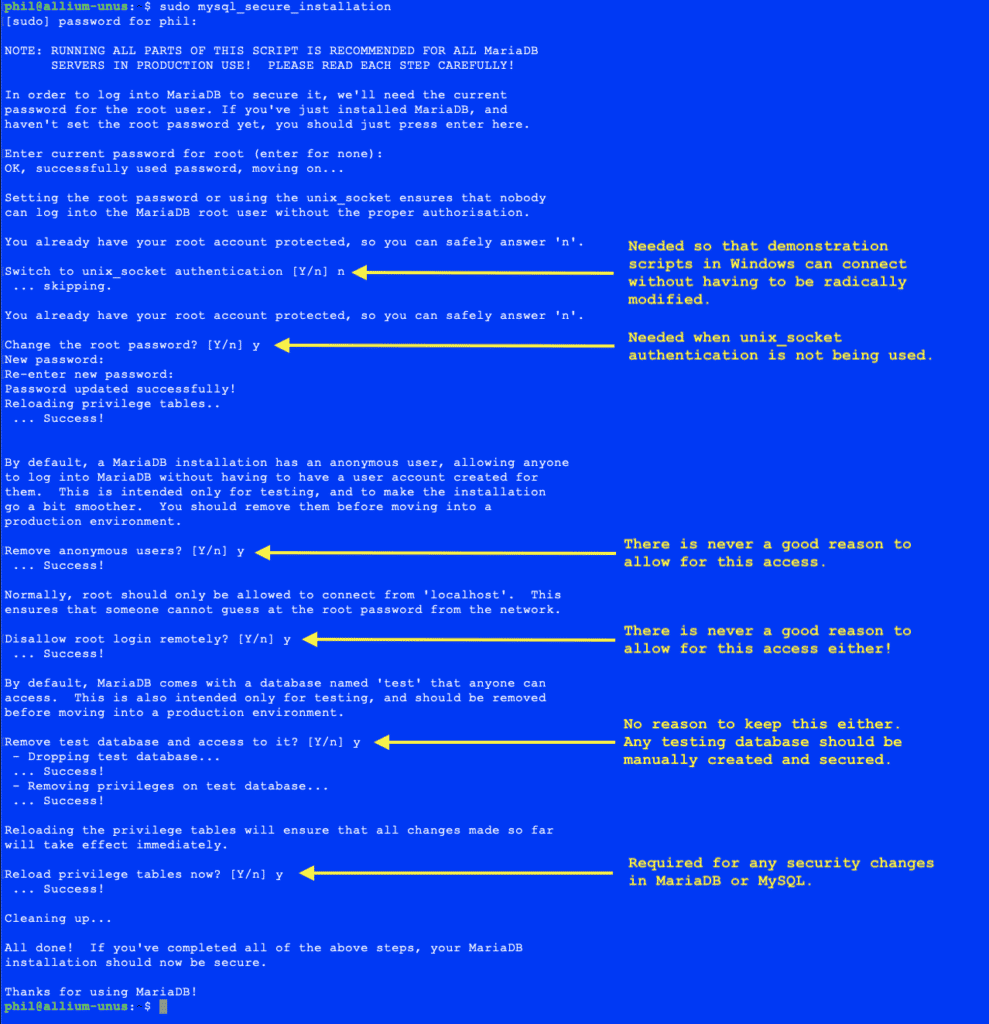 The MariaDB Installation for Windows can be accessed via https://mariadb.com/kb/en/installing-mariadb-msi-packages-on-windows/. This site includes links to an installer, which will configure all of the options, but as it is Windows, unix_socket authentication will not be available. This installer also presents an option to install HeidiSQL, which will provide a graphical database management interface for MariaDB.

Please note that the links posted were active at the time this article was written. If the links are no longer active, this information can be accessed via one’s preferred search engine.

How to Create a Database in MariaDB

Now that MariaDB is installed and configured, the provided mysql client will allow for the creation of a basic database with appropriate access restrictions, as was the case with previous database programming tutorials in this series. You can read those in the links below:

A database named RazorDemo, with tables for Artists and Albums/b> will be created in MariaDB, as it was in the above-mentioned tutorials. Additionally, a MariaDB user account will also be created so that the demonstration Python scripts can connect to this database and modify its contents.

The –password parameter tells the mysql client to prompt for the password. Use the password entered in the initialization process above. The following commands can then be used to create the RazorDemo database and its associated user account. Note that these commands are executed within the mysql client after successful authentication. The > in the command listing below represents the prompt used by the mysql client. This may vary in appearance.

Note that the password as shown in the create user… command is the only instance in which the password will appear in clear text. The password is hashed and then stored internally. Its original value cannot be recovered and should it be forgotten, it will need to be reset.

The @’localhost’ syntax next to the create user… and grant all privileges… commands restricts the scope of the rd_user account to connections from localhost. This means that even if a remote user has the password for that account, no connections can be made to the database from any network location. Below is the typical output of the commands above: 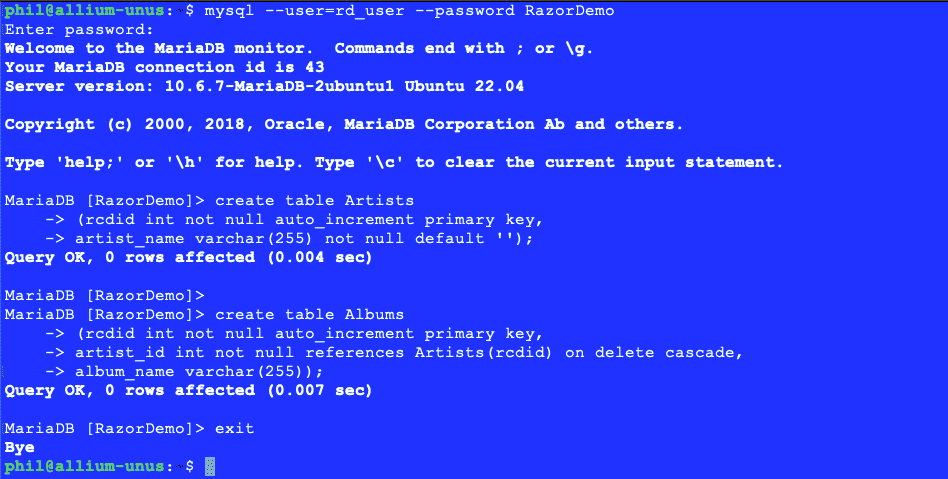 Note: as is the case with any administrative or superuser account for any software application, the MariaDB root account should be used sparingly, and it should never be used in place of a proper regular database user account for either database management or from any database-enabled application.

The success of these commands can the be tested by connecting to the RazorDemo database directly using the rd_user/b> account:

Read: What Are Client Statistics in SQL Server?

How to Create Tables in MariaDB

This time, the name RazorDemo is entered as the last parameter to the mysql command, telling the mysql client to automatically use the RazorDemo database. Upon successfully connecting, the tables can be created using the SQL code below:

The outputs of these commands will look similar to the image below: 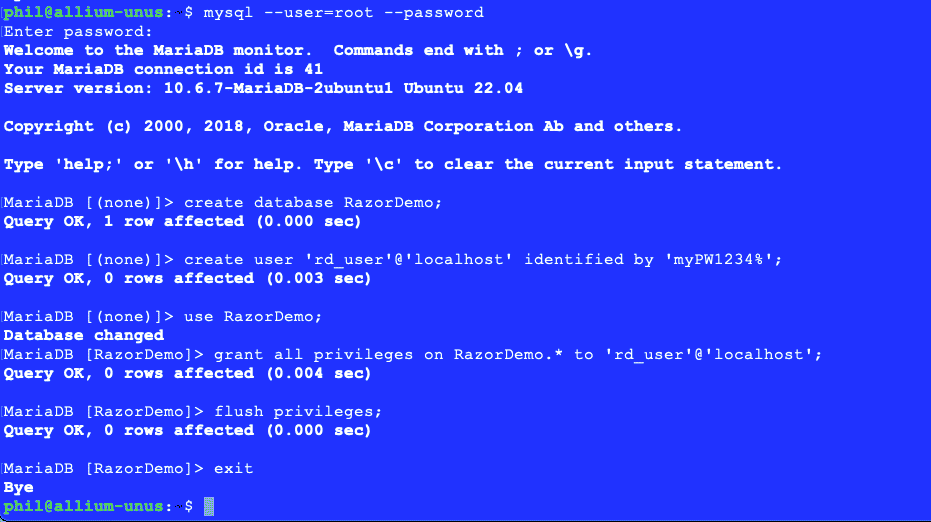 Note: the –password parameter can also accept the actual password. However, there are two potential problems with this:

As can be seen from the create table statements, the records in the Albums table must point to a record in the Artists table. The application code must respect this relationship as the database will be strictly enforcing it. MariaDB will reject any attempt to insert a record into the Albums table which does not correspond to a record in the Artists table. Furthermore, the on delete cascade clause in the artist_id column in the Albums table means that any deletion of an artist record will result in the automatic deletion of any Albums records associated with that artist. This is known as a cascading delete. 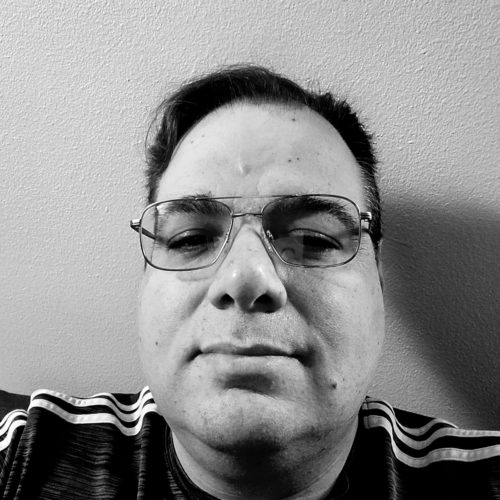 Phil Hajjar
Phil is usually seen making things work together that shouldn’t be, but need to be. He describes himself as a marriage counselor for software and other technology systems. He appropriated this moniker way back in college as he first experimented with making disparate software work together back then, and he continues doing so in his over 20 years of professional IT experience now.