Virtually all interactive applications nowadays involve the input of human-readable text. From accounting to instant messaging, we all want to look professional and use communication that speaks to our point and not to our ham-fisted typos. Sure, you can always use a dictionary attack on human-readable strings, but to really help the user you should offer the familiar “suggestions” interactions provided by your typical office word processor.

Fortunately, a variety of spell checking products are available for the Visual C++ and Visual Basic developer. This article looks at SpellChecker, an easy-to-use shareware DLL add-on by GPP Software.

A Speller Without a Lot of Baggage

SpellChecker is a self-contained Windows Dynamic Link Library (DLL) that has all of its functionality in SPLCHK32.DLL. The included setup script installs it in your System32 directory. By using the provided import library or Win32 LoadLibrary() calls, you can obtain a spell checking functionality that normally requires the use of DDE/OLE communications with products such as Microsoft Word. Thus, it should be simple to integrate it into any development environment that can call DLL functions.

SpellChecker dictionaries can reside in flat files, Microsoft Access, or Microsoft SQL Server databases to enable sharing across a network. SpellChecker comes with a standard UK English dictionary of 113,000 words, but you easily can build up your own dictionaries—even for different languages. (Free dictionaries for other languages can be obtained around the Internet or from GNU Aspell project, for example.) You need only pass SpellChecker edit fields or files containing many words.

Without further ado, take a look at how quickly you can perform the simplest of spelling functions: checking and correcting an arbitrary buffer. Using the supplied “demo” project, I compiled the basic MFC app shown in Figure 1 with Visual Studio. 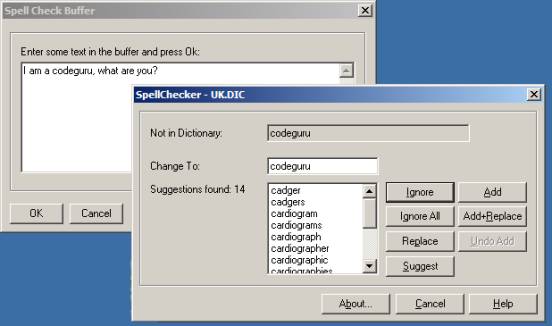 The upper-left window is an ordinary MFC dialog created in the sample app. The lower-right dialog was invoked by SpellChecker as a result of the API calls. The buttons work in the expected ways:

Now, take a look at the code used to build this particular demo, starting from the MFC “OK” button handler:

The code is about as simple as anyone could ask for! It has tmBuffer linked to the contents of the edit buffer and copied in by the UpdateData(TRUE). Then, it calls SpellLoadDictionary(), which is an all-in-one initialization function. Coincidentally, if the product is unregistered, this is when the registration reminder pops up. Then, it’s basically a matter of kicking off the spell check routine by calling SpellCheckBuffer() with the current hWnd, a copy of your buffer, and maximum length. Remember, a spelling correction session can arbitrarily change the length of the string needed.

After the user has completed the interactive session, the code returns back from SpellCheckBuffer(), copies the new string for storage, and displays any error conditions that might have resulted from the session. The most likely error would be a missing dictionary or similar problem, I suppose.

Because the example was designed to be completely self-contained, the code frees all the resources at the end with a call to SpellUnloadDictionary().

One of the coolest SpellChecker features is the ability to spell check a live edit field in place. The following is an example of the code for that:

This time, the code calls SpellCheckEdit() instead of SpellCheckBuffer and passes in both the parent hWnd and the edit control’s hWnd, which should be enough to get the job done. No need to repeat the screen dump for this one.

Importing words is as easy as pie with SpellChecker. Basically, you do the usual setup and then call SpellImportWords() with the name of an ASCII file containing the new words to add:

I was impressed to find that it actually updated the permanent dictionary file (“UK.DIC”) after this API call rather than writing a temporary file. Upon inspection, the dictionary had grown an appropriate amount and its datestamp had changed, of course. As you can see in Figure 2, the word “Codeguru” was added to the dictionary. So, it appears as a possible suggestion. 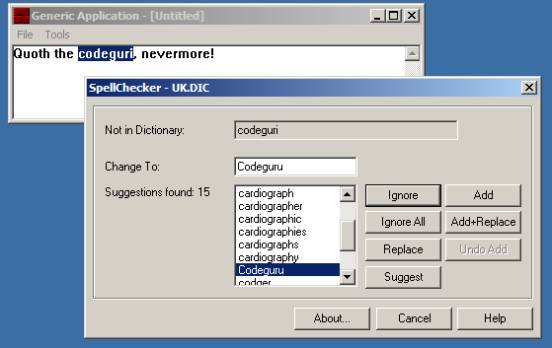 As far as I can tell, suggestions are always listed alphabetically, not probabilistically. So, even if a word is off by only one letter, the user might need to scroll. Maybe SpellChecker can offer that as an option in a future release.

Of course, different developers have different requirement levels for their spell check needs. I encourage you to check out several APIs before committing yourself to any. Here are a couple of others to browse:

Spell checkers are plentiful and easy to integrate, so why not enable your interactive application to help users look a little smarter (or less clumsy, if you prefer) through a helpful dialog or two. Give GPP Spellchecker a try for your basic spelling needs.

Victor Volkman has been writing for C/C++ Users Journal and other programming journals since the late 1980s. He is a graduate of Michigan Tech and a faculty advisor board member for Washtenaw Community College CIS department. Volkman is the editor of numerous books, including C/C++ Treasure Chest and is the owner of Loving Healing Press. He can help you in your quest for open source tools and libraries, just drop an e-mail to [email protected].

Read more
Previous articleFind Directory Files Easily and Execute a Function for Each of Them
Next articleCodeGuru Update eNewsletter – June 20th, 2006