Microsoft’s Tech Ed show is where there used to be big announcements happening in the IT Pro space. This year, it seems that Microsoft had scheduled more announcements before and after the show. Azure happened the week prior. Windows Phone 8 talk is happening soon after. There really wasn’t much left to be announced that would get you juiced about at Microsoft TechEd. This year it wasn’t the place to find a ton of cool, breaking news.

Don’t get me wrong, there were lots of reasons to come in, sit down, and look at the menu, but overall it was a bit of a snack rather than a full-fledge meal. In a year with a zillion new products coming, it seemed like more would have jumped out. With a menu of sessions ranging from Azure to Windows 8 with a little System Center and SQL Server, there was a lot of information still to be had.

Within that information were a number of little nuggets that were new and/or interesting. There was one that I wanted to call out now. I’ll touch on others in future posts.

Windows on a USB

My trip to TechEd was for work, so I needed to bring my work computer. Unfortunately, our corporate standards and security don’t allow me to install a pre-release version of an operating system on my computer. I could be sly and install Windows 8 Release Preview on a virtual hard drive, but that starts messing with the system in a way that will get the IT team on my case. I prefer to keep on their good side.

One of the coolest things I saw at Tech Ed was Windows 8 Release Preview running on my work computer.

Yes, I’m running Windows 8 on my corporate work computer that has some older (soon to be unsupported) version of Windows installed. Better yet, I’m not going to get into any trouble with my IT guys.

How did I do it? Quite simply, I used Windows To Go. Windows To Go is an Enterprise feature that lets a person boot Windows 8 from a USB drive. Said differently, I have a USB 3.0 thumb drive that has a full version of Windows 8 Enterprise on it. This is the full bits, the whole enchilada. When I boot to this USB drive, my computer starts up and is running the full Windows 8 operating system. Nothing is being installed on my computer, but rather it is all running off the drive.

What is really cool is that I didn’t have to install Windows 8. In fact, I didn’t have to do anything with the computer other than make sure it booted to the USB drive instead of the hard drive. The first time I booted to the USB drive, there was a few minutes delay as drivers and hardware were evaluated by the system. Once that was done, that delay didn’t happen again. The second time I booted, I was up and running Windows 8 fast!

The Value of Windows To Go

Once Windows 8 is running in this way, I can use it in any way I want. I can tweak settings, install apps, and otherwise customize it to my own likings. All of these changes are saved. As a result, when I turn off the computer, my USB will have everything for the next time I boot to it. Note that the next time I boot to it could be on any other system that supports Windows 8. This means I could stick the USB drive into another computer and boot to it. What I’ll see is what was there when I last turned it off.

But…, There’s Always a But…

There are a couple of things that might seem bad about Windows To Go. For example, when you boot to Windows To Go, the existing hard drive on a system is blocked. You can’t access the data or information on it. You are able to see that the hard drive is there, but you’ll be unable to access anything on it. This protects the drive from what you do. Since it is very possible you could be booting to a machine that isn’t yours, this is good.

Another issue is that you are running off a USB drive. Because of this, you need to be using a USB 3.0 thumb drive. In fact, Microsoft stated that there are currently on two brands of USB drives that currently qualify to running Windows To Go. Other drives at this time just aren’t solid enough to work consistently and reliably. After all, USB drives have a limited number of read/writes that they are generally certified for, so running your system off of it is going to push these limits.

Another obvious issue is that you have to avoid unplugging the USB drive when you have Windows 8 running off of it. Consider what would happen if you yanked out the hard drive of your current system while the machine was turned on.

If you do knock the USB drive from the system (or pull it out), the system will appear to freeze. You’ll have 60 seconds to plug in the USB to have the system resume in the same state. Of course, it has to be the same USB port. If you don’t do this, the system should shut down.

I’ve just started playing with Windows To Go. Even so, it seems to be one of those little things that is very cool in some situations. If I move my data to the Web and my operating system and apps to a USB drive with Windows to Go, then suddenly, portability becomes a USB drive in my pocket. I can simply borrow anybody’s computer (that supports Windows 7 or better) and use it as *my* system with my setup and apps. If I have Internet connectivity, I can even more portability and space to store stuff. That seems pretty cool to me.

Oh, can I borrow your computer?

Update: I was asked to post an image of the WindowsToGo USB Drive I was given: 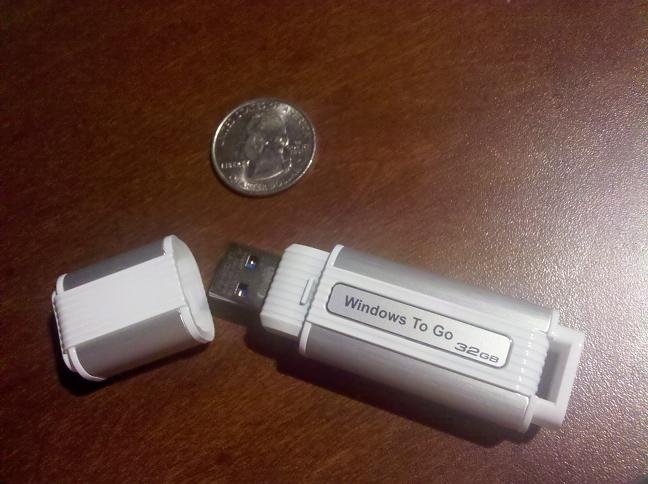