We ran a quick poll to ask members of our community about Net Neutrality. Although there were those who expected landslide results, that was not the case. The question was posed as: When it comes to Net Neutrality:

In simple terms, net neutrality is seen as a means of preventing Internet service providers from charging different fees for bandwidth depending on whose sites you visit. For example, if an ISP wanted to offer their own video streaming services, they could decrease the bandwidth provided when their customers use third-party streaming services and increase the bandwidth for their own. This would give their video service much better performance, and thus an advantage over their competitors. More so, the service provider could offer to improve the performance of the third-party service by charging their customers a fee to increase the bandwidth. Even though some say this is simply how capitalism and business work, others say that, because of limited options, it would force people to pay what seems like extortion fees to get equal services.

The thought is that, among other things, net neutrality rules prevent service providers from being able to extort their members or to throttle their competitors unfairly. It is believed by many that the removal of the net neutrality rules could hurt consumers as well as Internet businesses such as Netflix. For those who believe service providers will do what is right for their customers, consider the examples that have already happened. For example, Verizon has already been accused of throttling NetFlix. Despite the fact this might have been an “optimization test,” the result was that users were capped.

Blocking, throttling, and the use of paid prioritization are the three areas that net neutrality works to prevent. In addition to Verizon being accused of capping, Comcast has been accused of blocking. In one case, it was questioned whether Comcast blocking HBO Go on Sony consoles would be a violation of net neutrality.

So how did our audience vote? The results were: 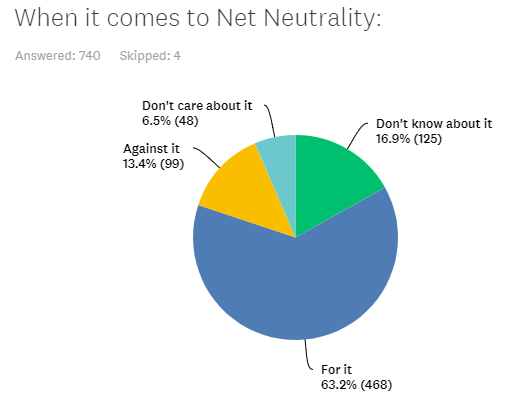 As expected, the “for it” answer did take the majority of the votes; however,

Net neutrality is not a simple topic and many people are polarized by the topic. The FCC was expected to make a decision this week on whether the rules should be overturned. Due to the vast number of comments regarding the topic, the FCC moved the date out two weeks (to August 30th) to allow more time to review the feedback. In the FCC filing, they indicate that of the millions of comments on the topic, they believe that over 7 million were fraudulent. I believe that the decisions around net neutrality could impact Internet services for most people. If the net neutrality rules go away, the popular belief is that there will be a negative impact for many consumers from higher fees, caps, or throttling.

As to our communities, here are a few comments they had on the topic: