Windows 10: Is Microsoft Seeing Things That Aren’t There?

Microsoft did a media presentation today showcasing more information on what is coming with Microsoft Windows 10, which is expected to be released this year. Although most of the information built on what has been stated before as well as what was expected, there were a couple of tidbits that were new to me.

The presentation, which lasted over two hours, should be available on demand at http://insider.Microsoft.com. In the meantime, I’ve provided a few of the highlights that I took away from the event. I have to say that the coolest announcement was on Microsoft HoloLens, which I’ll cover after the more pertinent items for Windows 10.

Microsoft introduced Windows 10 last September and is expected to release it later this year. Via an Insiders program at the link mentioned above, you can get access to an early preview. Microsoft indicated that 1.7 million people have accessed this early preview and that over 3 million copies have been installed. Of course, this is very early software, so if you chose to install it, read the warnings.

Microsoft plans to release a new update to Windows 10 next week. An early build of Windows 10 for Phone will be released in February.

Windows as a Service

Microsoft is releasing Windows as a Service. This means that instead of future versions, Microsoft will update Windows as needed. Windows will simply evolve as time goes on. For those using Windows 7 or Windows 8, you will have the opportunity to upgrade to Windows 10 at no cost for the first year. You should also have access to the updates for a year.

The biggest thing about Windows 8 will be that the Windows 10 Service will be the same service regardless of platform. Whether you are using a phone, a table, a desktop PC, or a larger television-style device, Windows 10 will be the core operating system. Developers will be able to create a single code base to target all of the various platforms as well as to target the Xbox One. Microsoft has mentioned Universal Apps for a while, but with Windows 10 it becomes the core of how developers will want to focus. As expected, with a single universal-style app, there will also be a single App Store as well.

There are a number of changes to Windows coming that will make the integration of desktop and mobile interface work a lot better together. Desktop apps (Win32 apps) can be used and manipulated like Windows Store Apps.

Desktop versus Tablet and the Use of 2n1s

The ability to use the desktop—or not use the desktop—gets easier with the ability to switch to and from tablet mode. This becomes very important if you are using 2n1 devices or if you are connecting and disconnecting a keyboard. When you use a 2n1 device such as a notebook, you can have the standard desktop experience. At the time you pull off the keyboard, the system will prompt you to shift to Tablet mode. If you do this, the Windows 8 tablet interface will take over, thus setting applications to full screen and making touch more relevant, as you would expect if using a tablet. When you put the keyboard back on, you’ll be prompted to leave Tablet mode, at which point your machine will revert back to the multiple window desktop interface. This all happens smoothly.

Another feature is the ability to put a tablet into PC Mode. This gives you that desktop experience and interface, which is important if you choose to dock your tablet and use it like a PC.

The 2n1 functionality is one example of the mobility of experience that Microsoft is trying to provide. They want to make it easy for you to be able to switch between devices. When you go from a phone to a table to the desktop, your ability to work should not be hindered. Additionally, you should be able to access your apps and work. With universal apps, the apps you use on the various platform are in essence the same apps simply tweaked to take advantage of platform features or formatting.

To make the ability to move from platform to platform easier, the interactions with all of the devices should be easier and more natural. To this end, Microsoft is focused on natural interactions. This includes interacting with voice, pens, gestures, and your gaze. Yes, Microsoft called out gestures and “your gaze” when defining natural interactions. All of this is expected to make computing more personal and your experience more portable across devices.

A few Specific Changes to Windows 10

Cortana on the Desktop

Cortana is the personal digital assistant currently available on the Windows Phone. This will become available on the Windows desktop as well. By using Cortana, you’ll be able to pull data and gather information easier. The new Cortana will understand file types as well as understand the applications that are on your machine as well as in the store. This will allow you to find things easier as well as to do things such as use voice recognition and commands to write and send emails.

As with previous versions of Windows, the new release will have applications as well. This includes an update to Microsoft Office that supports touch even better as well. Windows Phones will come with Word, Excel, and PowerPoint. These applications will take advantage of Windows 10. With PowerPoint, you’ll be able to do wired presentations that are responsive. You’ll be able to do this with Miracast or via wire. Of course, wireless printing will be supported as well.

Other applications will include updated versions of Microsoft Outlook Mail and Outlook Calendar as well as a universal Photo App. The People App will also be updated as well as the Music App. There is also an update to the Maps app that will include Cortana integration so that you can have Windows 10 and Cortana do things such as help you remember where you parked your car.

Rather than trying to kludge Internet Explorer forward yet again, Microsoft is putting a new browser experience into Windows 10. The new browser has been operating under the code name, “Project Spartan.” The new browser will have a completely new rendering engine, a new look and feel, and a lot of new features. Microsoft focused on “a new implementation of a web browsing experience.” That’s their words, not mine. The preview of parts of this experience included showing notes being added on top of a web page. This was done not only with touch, but also using a commenting feature like you can do in Microsoft Word where you click and add a text box. They also showed reading enhancements that are being added into the browser where you can create a reading list as well as shift into a reading mode to make reading content easier. Finally, they commented that Spartan will be the only browser with a personal digital assistant (Cortana) built in.

Xbox One and Windows 10

One of the two areas I found most interesting was the change in how Xbox One and Windows will interact. Xbox One becomes another platform for universal apps. This means Windows 10 App developers will be able to target Xbox one in addition to phones, tablets, desktops, hubs, and other devices. Additionally, Windows 10 will have an Xbox App for games. 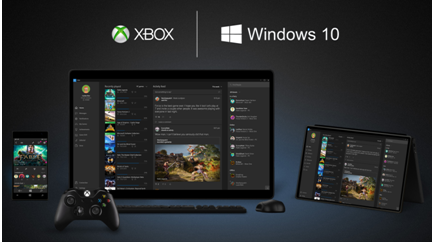 Two other gaming changes include an update to DirectX 12. This will provide better graphics and resource use. There will also be the addition of a “Game DVR” so that you can record game play to share with friends. One cool feature of the Game DVR is that it will allow you to record the past 30 seconds of game play. If you do something really cool, you’ll be able to hit Win+G and quickly record what you just did!

Microsoft also showed Windows Surface Hub running Windows 10. This is similar to devices they’ve shown in the past; however, this is an updated version running on a 4K screen with cameras, microphones, and other technology. This whiteboard-sized, all-in-one screen is great for business meetings and such. It uses pens, touch, and all the features of Windows 10 as well as integrate with Skype for conference meetings.

There is also the ability to connect and work with Windows 10 devices. As an example, Microsoft showed a Power Point presentation from a PC linked to a Surface Hub. The user on the PC is able to display the presentation on the Hub. More importantly, the people using the Hub are able to do “ink back” and “touch back” to annotate and change the presentation and have those changes reflected back on the remote machine.

The biggest announcement (or at least the most interesting) from Microsoft related to Windows 10 was HoloLens. The Holo stands for Holograph. This head display provides augmented reality in a self-contained Windows 10 Head Mounted Display. Between the HoloLens and the HoloStudio application, Microsoft is looking to make a huge change in the same way the mouse or touch have made changes. The HoloLens device provides the ability to augment reality with holographs. It uses no markers, no wires, no external cameras, no phone, and no PC connection. It is its own device—its own Windows 10 device. 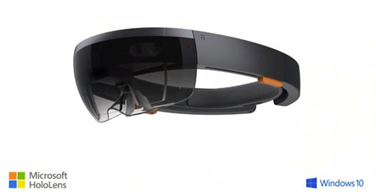 Even though no price was mentioned, it seems to be following Windows 10 in regard to a launch. In a video shown, NASA plans to roll the device out to members in one of their teams this summer.

Windows 10 is not going back to the desktop experience people seemed to love in XP. Rather, it is pushing the limits of being an operating system for all platforms. If developers drink the Kool-aid and build universal apps, then the platform has a chance. The idea of being able to seamlessly work on any device and have your work follow you is one that I believe people will buy into. It is a matter of whether developers build the apps to do this and then whether people will adopt it.

In the meantime, Microsoft isn’t sitting still, but is jumping into new areas. The HoloLens appears to be a legitimate device that will bring augmented reality to the forefront. The examples Microsoft presented are realistic and useful. It lets people see things that aren’t there in a manner that is viable and useful. Microsoft is already seeing the things that aren’t there, and I look forward to getting my hands on a HoloLens so I too can see!