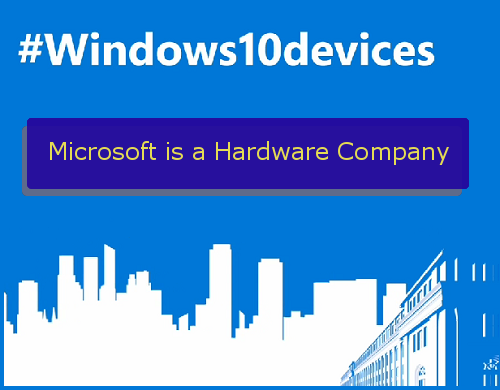 Microsoft had an event in New York City to talk about the devices they have coming to market. The end result of the “#Windows10Devices” presentation is that it is clear that Microsoft is playing in the hardware space, and they are playing hard.

Several pieces of hardware were announced, as expected, including new phones and updates to Surface. There were even a few surprises. The following slides cover highlights from the presentation and show many of the Microsoft Hardware devices and features that were announced, including the HoloLens Developer Kit. 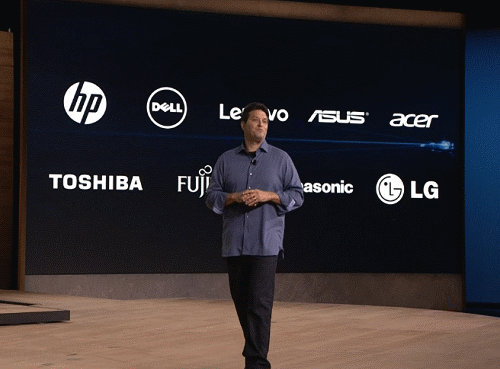 Microsoft Windows 10 Has Had a Great Start

Microsoft partners with a lot of vendors that produce hardware already today. As a result of the hardware on the market, Microsoft has had 110 million copies of Windows 10 installed in the first eight weeks that it has been officially on the market. 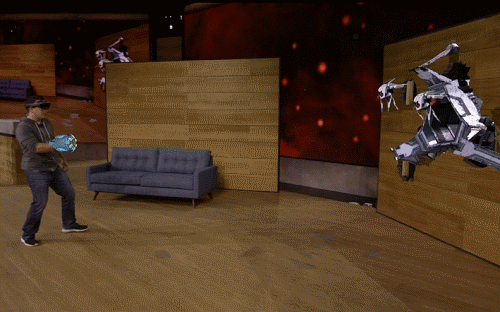 Microsoft announced that the HoloLens Development Kit would be available the beginning of 2016 at a price of $3,000US. HoloLens will be able to be used to create and experience augmented reality games and programs such as the Project XRay game shown in this slide. As a standalone Windows 10 device with no wires and such, the HoloLens provides a great platform for developers to create interesting applications that integrate with the real world.

In addition to the holograms that Microsoft has shown before, they added to the demo by including wearable holograms. For more on the availability of the HoloLens Development Kit, see my post, Get Your Hands on a Microsoft HoloLens Device

A new version of the Microsoft Band is also coming. You can pre-order the Microsoft Band 2 today for shipment by the end of October at a price of $249US. This new version of Microsoft’s health wearable touts a better curve for fitting around the wrist as well a number of additional features. One of the more interesting changes is the addition of an eleventh sensor to the device, a barometer. This will allow the additional tracking of elevation changes in real time. This adds to the GPS, UV, heart rate, and other sensors that are already in the Band.

Additional tracking will also include VO2 Max, which will provide an estimated measurement of your oxygen volume. By using the heart rate and their own algorithms, the Microsoft Band 2 will be able to estimate your oxygen intake. This is a feature that is currently said to be unique to the Microsoft Band. 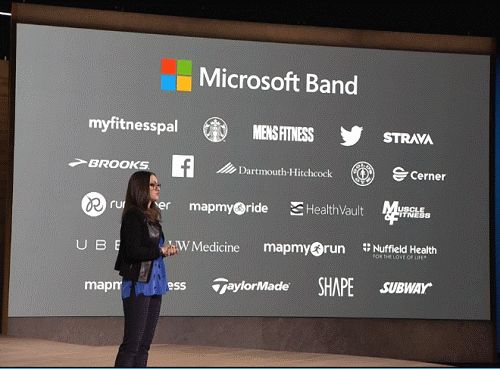 One of the interesting things about the Microsoft Band is the ability to support applications. While my favorite Band application is the Starbucks App, it is not the only one available. As can be seen in the slide, Microsoft is working with a variety of companies to provide even more apps. One of the application types that Microsoft talked about was for golfing. Because of the Band’s sensors, it can do things such as keep track of your strokes when you are on the golf course. There is no need to have your caddy do what your Band is already fully aware of! Of course, your Band will know if you are cheating on your stroke count as well!

With the new Band, Microsoft is not only talking about the new partners they are working with for applications, but they also emphasized the ability to access and work with the big data being created from the device. Although they are promising better tracking and reporting, they also are stating that you will be able to get better technical insights from the data it produces as well. 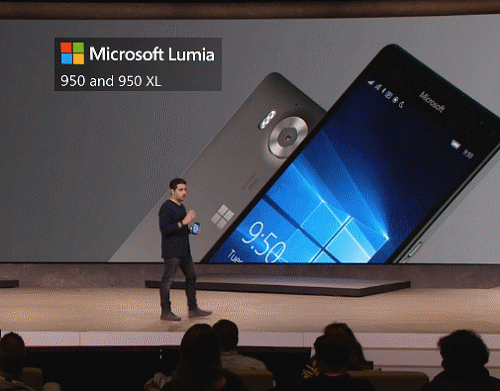 The specification on the 950XL reads like a power system. It has an Octa-core 2.0GHz Qualcomm Snapdragon 810 processor that drives 3GB of RMA and local storage of 32GB (expandable to 200GB via microSD). It has a 5.7” QQHD screen that operates at 2560×1440 pixes running TrueColor 24-bit/16M graphics at 518ppi. It has a replaceable battery that should last most of a work day. It is slated for 9 hrs of Wi-Fi browsing or 11hr of video playback.

Most people use their phones as cameras. The 950XL has a 20Mp auto focus camera that also can do full 4K video . A second, front-facing camera is full HD 5MP that can do 1080p video. To help those who take pictures, there is now a camera key built into the phone to help make taking pictures even easier. 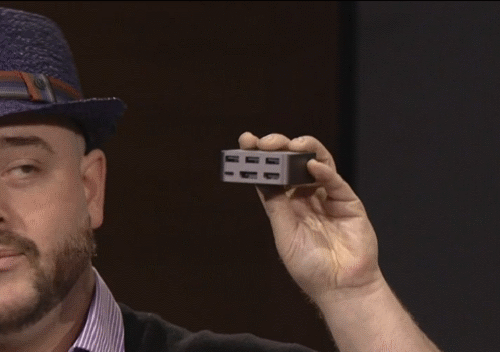 One of the cool features is that when you connect a display to the phone, it can take advantage of that display size. You can see this in the slide above. 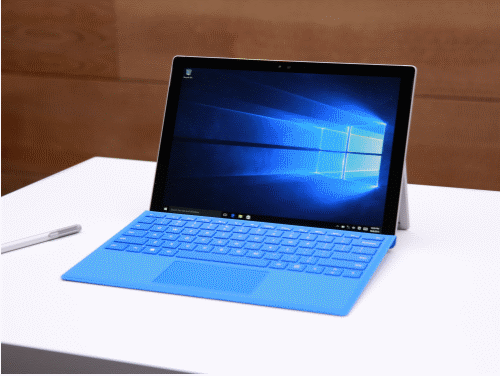 The one device that most people expected to see announced with the new version of the Surface, the Microsoft Surface Pro 4. In this regard, Microsoft announced the new 12.3” version of the system that weighs only 1.73 lbs. The new systems start at 128GB and can go up from there. With a 2763X1824 resolution, solid state drives, built in graphics processing, and Windows 10 Pro, the systems are positioned to replace a laptop.

One of the features Microsoft focused on was the optical stack used to create the Surface Pro 4 tablets. The cover glass is only 4 microns thick. Combine that with the other technology improvements, and you end up with the thinnest machine you could want while still having enough thickness for the connector ports.

Starting at $899, the base configuration of the Surface Pro 4 will be available October 26th. The higher versions containing Intel i5 processors start at $1299 and will also be out October 26th. An i7 system starting at $1599 is expected on November 20th.

With Surface Pro 4, the pen will now connect to the tablet. Additionally, you’ll be able to choose from a variety of colors for the pen. The technology in the pen was adjusted so that there are 1024 levels of pressure being measured from its tip. Additionally, there will be interchangeable tips to make its use more versatile. Expected battery life for the pen is set at a year so that you don’t have to worry about it needing to be charged when you are in the middle of your work. 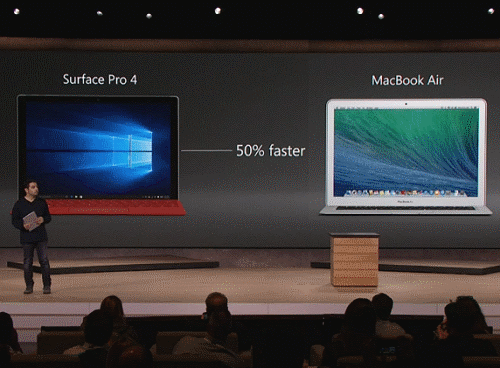 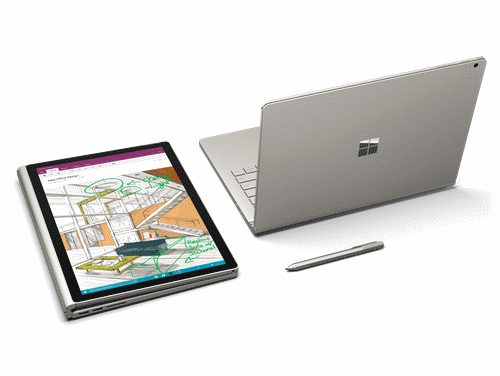 The biggest announcement Microsoft made this week was the fact that they now are producing a Microsoft Laptop computer. The Microsoft Surface Book was announced as a lightweight notebook computer that they dub “the ultimate laptop.” Starting at $1499, the machines are available for pre-order now and will be available October 26th. These are machines with a 13.5” screen that has 267PPI based on 6 million pixels (3000×2000 resolution). They are driven by Intel i5 or i7 processors and include a NVIDIA GeForce GPU with High-speed GDDR5 memory. They tout a 12 hour battery life.

These are 2n1 touch systems that allow the screen to be folded behind the keyboard by using the dynamic fulcrum hinge, or the screen can be completely removed as a tablet. Coming in at 3.48 pounds, this is an ultralight notebook. If you pop off the keyboard, you end up with a high-powered tablet. 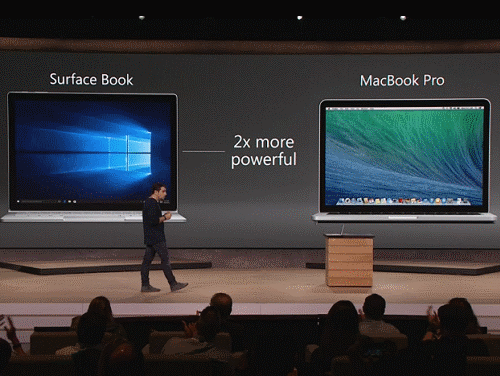 Microsoft presented the Surface book as a powerhouse machine. Compared to a MacBook Pro, the Microsoft Surface Book is said to be 2 times more powerful. 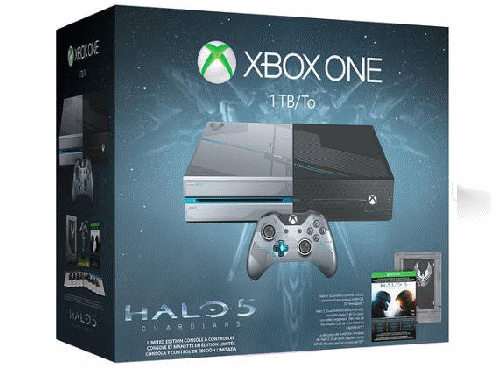 Microsoft announced a Halo 5 Edition of the Xbox One Console coming October 20th as a new elite gaming controller that also will work with Windows 10. 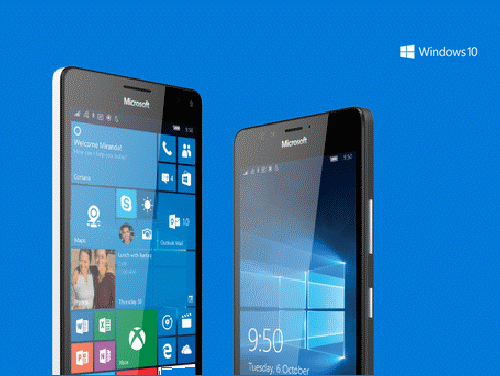 Parting Thoughts on Microsoft as a Hardware Company

Microsoft has been making keyboards and mice for quite a while. Their move into MP3 players with the Zune didn’t go well. The Spot watch was ahead of its time. Today, however, much of what they’re doing in the hardware space is working. Microsoft’s hardware is a multi-billion dollar business unit. The Surface has gone from nothing three years ago to over $3 billion a year now. With the new Microsoft Surface Book and technology like HoloLens coming in the future, it will be interesting to see where the Microsoft hardware company lands in the future!

Read more
Previous articleBug Buster 004: Can You Bust the Bug?
Next articleWorking with Google Protocol Buffers and .NET