Will there be Long Lines for Microsoft’s Surface Hub?

Surface has evolved over the years from a sit-down table top system to a wall system to the more robust Surface Hub that Microsoft has been showing at their last few conferences. Somewhere in all that history, Microsoft also spun out the tablet Surface system as well.

Although the tablet Surfaces have evolved quickly and seem to be getting more competitive in price, the large form Surface devices, now called the Surface Hub, seem to have evolved more slowly and have retained the higher price points. 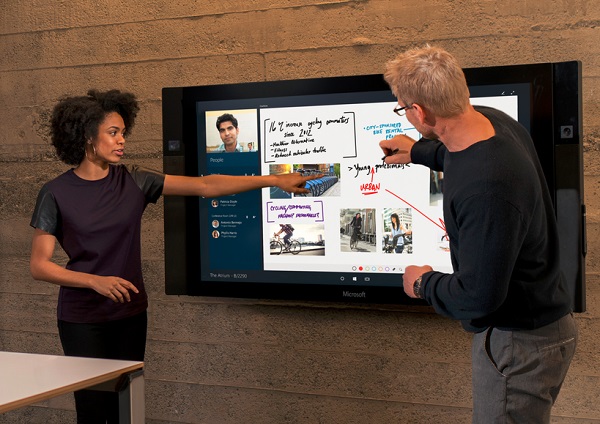 The large Surface devices have evolved into being large-screen collaboration devices aimed primarily at businesses. The latest iterations include video conferencing and such through Skype for Business (Lync) as well as support for touch, One Note, Office, Windows 10 apps, and more.

The Surface Hub will be available in two main configurations. For those on a budget or looking for a smaller device, the 55-inch versions will be $6,999. For those looking at something a little bigger, there is an 84-inch version that will run $19,999.

What do you get for all that cash? While costly, the specs are sweet. Starting with 100 points of multi-touch and up to three simultaneous pen inputs, it should be easy for three people, if not more, to be working on the screen at once. If you are conferencing with others, the dual video cameras (1080p) along with the 4-element microphone array will help to capture both sound and video locally. Other standard computing features, such as built-in Wi-Fi, Bluetooth 4.0, and NFC are also included. With the device running Windows 10, you have additional options as well.

Even though most individuals don’t have seven to twenty grand sitting around, businesses are likely to find value in the ability to easily capture collaboration efforts. Will replacing whiteboards and video conferencing justify the cost of these gadgets? Time will tell. At the price point that has been set, I don’t expect the lines will be long if you decide to buy one.

Although orders will start July 1st, the devices are not expected to ship until September 24th.