The Top Challenge for Developers is…

We got over 3,000 responses. Of those, 393 stated that they were not a developer. That still left over 2,600 responses that were from developers. The choices were:

From these ten choices, there was a clear winner; however, none of the choices ran away with the results. Simply put, different developers face different top challenges. The results from lowest to greatest were: 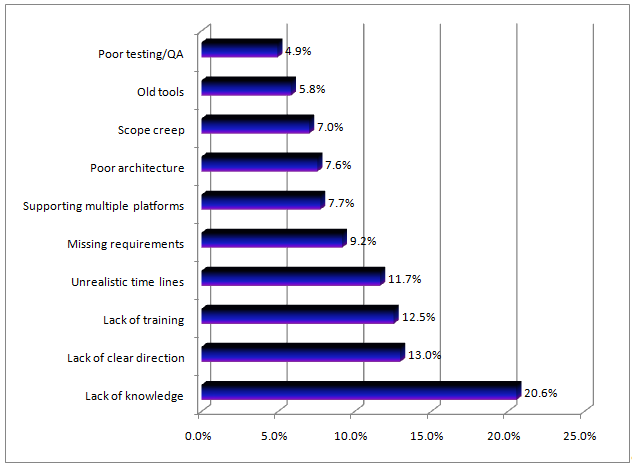 As you can see, lack of knowledge ranked number one with one out of five votes. If you add to this lack of training, then you jump to a third of the developers in total. Ranking second was lack of clear direction at 13%. Combine that with scope creep and missing requirements and you are above 29% of the responses that seemed tied to lack of information around the project definition.

What is also interesting form the survey are some of the comments that were provided. Numerous people who stated that it was all of the items on the list, not just one! Some of the other valid comments that we will consider adding the next time we do this survey include:

Only one person actually commented about potatoes, and I’m not sure who that is a developer challenge. The others, however, we stated by several people.

Did you agree with the top challenge? Are there other challenges you think should have been included in the list? Comment and tell us what you think!