At Microsoft’s Build conference a few weeks ago, they talked about the newest updates to Visual Studio. This release will include support for Universal App projects and more. For developers targeting multiple Microsoft platforms, features like Universal Apps are a nice edition to help you organize a single project solution to target multiple devices. These additions come as part of a second update to Visual Studio 2013, which follows Visual Studio 2012 and its four Update releases.

Having said that, in a recent survey of over 700 developers on Codeguru and VBForums, we found that it is Visual Studio 2010 that continues to dominate as the version most developers are using.

I’ve been told that the standard trend has been for most people to be one version behind with their development tools. If you ignore the Update releases of Visual Studio, then it would indicate that most people should be on 2012. It seems that based on our poll, the “one behind” trend is not being supported. As of today, our poll indicated that 6% weren’t using Visual Studio and that 58% are using Visual Studio 2010 or later.

If you look back, you’ll see that Visual Studio 2013 included new elements in .Net 4.5.1 including core enhancements such as 64-bit Edit and Continue, Async debugging updates, ADO.NET Connection resiliency, and more. For C++ developers, there were a lot of additions to help support C11 features including default template arguments, delegating constructors, explicit conversion operators, raw string literals, variadic templates, and much more.

Visual Studio 2012 also added a number of features including Windows 8 development tools, Windows Phone development tools, Asynchronous support, a page inspector, integrated NuGet support, improved support for Web development (JavaScript, HTML5, CSS), and a lot of additional features that improved the IDE and its use such as themes and a better search.

The following figures show the results of our survey. With over 700 responses, the results are statistically pretty solid. What do you think of these results? Are you still using a version of Visual Studio prior to 2012? If so, why have you chosen to not upgrade? 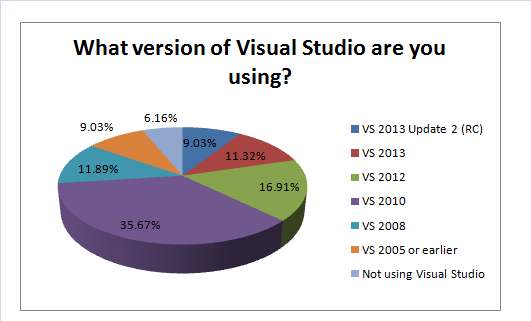 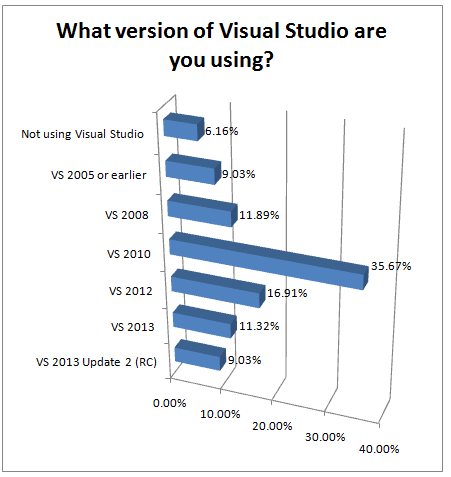