Are you a desktop developer? I’m currently running a poll on our forums that with 302 current votes shows 65% of developers are targeting desktop solutions: What is interesting is that desktops are evolving. What will the future desktop look like? Many believe that the future Microsoft Windows Desktop will look like the following: 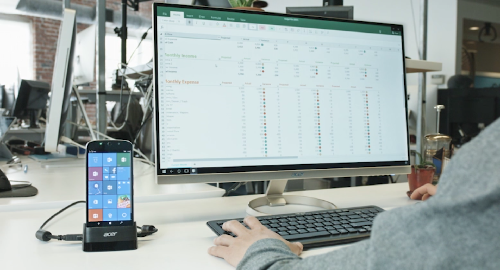 The desktop CPU device is that little screen to the left. The systems will also include the ability to “undock” the desktop CPU from the monitor and keyboard so that you can port it to other locations. One of the bonus features is that your desktop can also be used as a phone.

I’m talking a bit tongue-in-cheek about this, but the reality is, Microsoft has been talking about this for a few years now with their “Continuum” initiative. When your phone is as powerful (or more powerful) than your existing desktop system, and when your phone allows you to connect to a monitor and see things exactly as you would have on a desktop system (rather than seeing mobile app versions), then why would you use (or waste) space having the big boxes we have today?

Continuum was one of the enticing things about Windows Phones . For it to work, developers have to be fully attuned to writing responsive Windows 10 applications that are aware of the hardware available. Without the apps, then it won’t matter what the future desktop looks like because few people will care!

Do you see future desktops being replaced by docked phones?