Microsoft’s Somasegar (Corporate VP of the Developer Division) kicked off the launch talking about the changes that are happening in the industry. This includes changing expectations as well as the need for more business agility. Jason Zander then talked about Visual Studio 2012 and building modern Windows applications. Brian Harry, Technical Fellow then presented Visual Studio 2012 ALM features as well as talking about the new Team Foundation Server 2012.

Connected devices and continuous services are things that must be addressed in order for an application to be considered modern. Additionally, modern apps are applications that are always improving. Developers of these apps take feedback, measure results, and then they improve the app. They iterate this process over and over, continuously. The time frames for each cycle might be a day, a week, or longer. Regardless of the length, it seems the cycles are getting shorter for developers A number of things were mentioned in the keynotes. The following are a list of some of the comment and announcements made. I’ve included some information that was provided to me from Microsoft as well:

Keeping jargon straight – there are a number of differnet core application types that you can target with Visual Studio 2012: 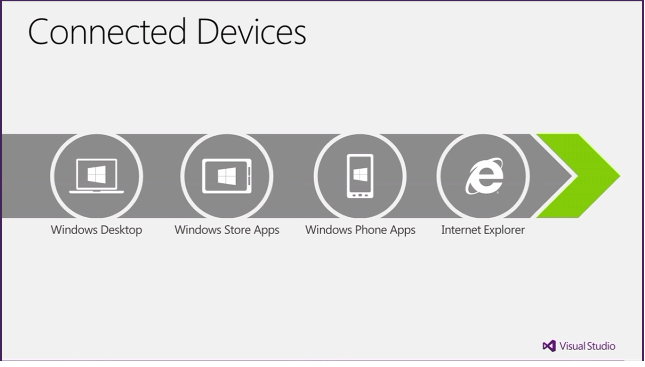 This version of Visual Studio gives people (including developers) a free tool for building desktop applications. It will be available starting today. If you are wanting to get started with desktop apps using VB.NET , C#, or C++, then this tool is a good starting point.

F# for ASP.NET, Cloud, and Azure

F# gets a boost today. There is now “F# Tools for Visual Studio Express 2012 for Web.” This add-on provides F# support for ASP.NET, Cloud, and Azure development. This should be available today.

I’ve mentioned these updates in the past. Microsoft has committed to doing interim updates and additions to Visual Studio. Today they commented that the first update will include added support for “agile teams, continuous quality enablement, SharePoint and Windows.“ This is expected to be released before the end of the year. Specific comments on this included a mention of ALM tools for SharePoint as well as additional testing tools. A community Technology Preview (CTP) should be available later this month.

Jason Zander called out three things in the new .NET. These are just three of the areas where updates have been made:

Additionally, it was stated that there are 3,400 extensions and add-ons available for Visual Studio.

Finally, one new tool was shown, the Page Inspector. If you are doing Web Development, then this is a tool worth checking out!

I’m sure there is a lot more coming on Visual Studio 2012. Feel free to share what you know on Codeguru. If you write about using Visual Studio, .NET, C#, or the any other area of Microsoft development, or if you want to detail how to use a tool, API, or service, then feel free to send what you write to my attention. If it is good, we’ll get it edited and posted to the site!