If You’re Not Doing Cloud or Mobile, You’re Falling Behind

There are a number of different developers. Additionally, when new products come to the market, there are different ways in which people approach them. You’ve probably seen a diagram like the following one that outlines the adoption live cycle when it comes to technology. 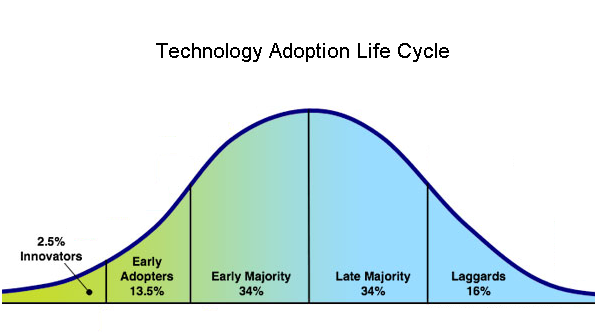 As a developer, I tend to be in the early adopter stage when it comes to looking at new technology. I find that it is interesting to be on the leading edge in order to know where technology is going. Because of this, I tend to get behind new things sooner than others. Two topics I’ve been ranting about for years include mobile and the cloud.

According to the chart, the halfway point is when a market shifts from early majority to late majority. Do you know where the developer crowd stands in regard to mobile and the cloud? So where would you place these two technologies in the life cycle of developing apps for the developer community? Would they both be in the same place? Before answering those questions, you should also decide what point in this life cycle you wanting to get involved with a technology, especially mobile and cloud.

We put out a survey to poll the audience that comes to the Devleoper.com Network. This survey included questions on usage for cloud storage and cloud computing. With millions of developers visiting our sites monthly, we tend to get a good representation of the developer community as a whole.

When we did the survey in 2012, it was interesting to see that 22% were using cloud storage and 19% were interested in Cloud computing. This seemed to indicate that we were leaving the early adopter stage. What was more interesting in 2012, was that projections for the number of developers that would be using the cloud in the following 12 months was 30% for storage and 40% for computing. This seemed high.

It is now 2013, and what we learned was that the projections seemed to have played out correctly. There is even a slightly higher percentage using cloud storage(43%) and computing (41%) versus what was projected.

In fact, the numbers seem to indicate that the time to the switch from early majority to the late majority. Based on the growth since 2012, the current numbers, and the projected future use, it looks like this switch will happen within the next six months.

These resources an help you get started. Additionally, at the time I was writing this blog post, we were doing a program with Microsoft that involved having people do activities around storing data in the cloud. You can find information on this program at www.Codeguru.com/azure_activities. You’ll be able to earn badges and possibly be awarded for doing things in the cloud!

Of course, I also commented about mobile. Within our audience, there were 26% that stated they developed for mobile in 2012. That put the topic solidly into the early majority level of adoption. In the recent survey, this increased to 31%. That’s a nearly 20% increase in the number of developers. That percentage, while small, equates to millions of developers when you consider the size of our sites.

Of course, we asked about tablet versus pure mobile. Those numbers were a bit smaller at 29% (up from 21% in 2012). That was a much larger increase that is quickly gaining on the broader mobile category. When we asked what platforms were being targeted and who what would be targeted within the next 12 months, it again looks like the industry could tip from the early majority to the late majority

One thing is easy to see. Things are moving fast. It is a great time to be learning new technology!