I declare today as VR Day! Two big steps forward in the Virtual Reality market are happening today. The first is the opening of orders for the HTC Vive. Pre-orders start today. The second big step forward is the announcement that Microsoft is notifying developers for pre-orders of the Microsoft HoloLens as well. These two events push forward the ecosystem of Virtual and Mixed Realities.

Microsoft is still on track with shipping HoloLens devices to developers by the end of the first quarter. Today, they confirmed that they plan to start shipping on March 30th. You can find information and the latest specifications on the HoloLens site at https://www.microsoft.com/microsoft-hololens/. This includes a number of images showing uses for the device.

Of course, a device is only as good as the applications. Microsoft also announced today that they are releasing a number of free “holographic experiences” that can be used with HoloLens. These applications will be available through the Microsoft Store when the devices start shipping. The applications include:

Fragments: A mixed reality crime drama game. You solve a crime that appears to have happened in your own room.

Young Conker: Another mixed reality game platform that gives a variety of experiences depending on where in the real world you play it. As Microsoft states, the game will be different if you play it in your living room versus your kitchen.

RoboRaid: This is the new name of the Project X-Ray game that has been seen in demos. This is a first-person holographic shooter game where you defend against an alien invasion. 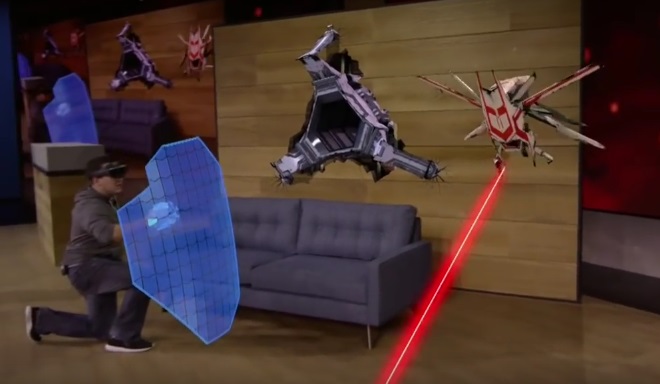 These applications will show how mixed reality and the HoloLens work. In addition to these applications, you can create your own. As has been stated before, the HoloLens is a Windows 10 device. You can acquire the tools you need to begin developing your own games and other applications on the Windows development site at https://dev.windows.com/en-US/holographic/. You’ll find Getting Started information, documentation, and the Holographic Academy tutorials.

As time goes on, we expect to also have articles here on Codeguru for developing to HoloLens as well as the other VR devices. Many people have already been using Unity to build 3D applications that will be run or ported to the Virtual and Mixed worlds. In fact, if you have an article you want to share, let us know and we’ll see about posting it.