Developers Are Interested in IoT and the “Maker” World

In a recent poll on a few of our developer forums, we asked about the Internet of Things and about interest in using some of the “Maker” boards on the market. The results were surprising in that there were more people playing in the “Maker” area than we would have predicted.

We asked the question, “Are you a ‘Maker’ or ‘Maker wanna-be’?” Over 400 people responded by checking responses on what Maker boards they had messed with. The results were: 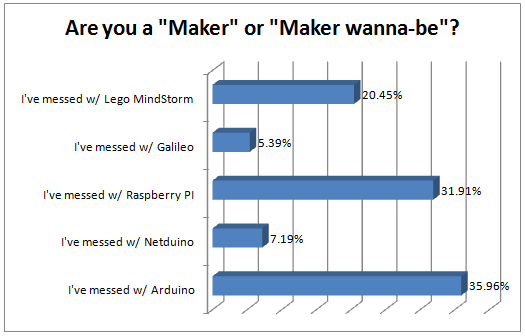 We also asked about the Internet of Things (IoT) in this question. We expected a low response to the number of people doing IoT, but were surprised to see that 9.66% said they were doing IoT already. 14.83% said they were interested in IoT. Finally, 6.97% said they don’t care about IoT: 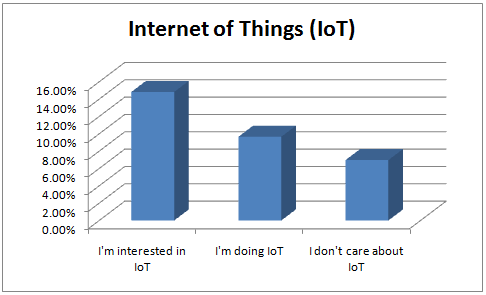 While it is easy to write off the Maker market as trivial, with the advent of IoT, we could see new life in the area. Many of the Maker boards listed above include processing power that could rivals computers from just a decade ago. Being able to buy most of the boards for under $50 US makes it easy to pick these up and begin to doing things with them.

I recently picked up an Arduino kit for about $35 that included sensors, the board, and more. In less than an hour I had an IDE installed and had a program running on the board.The kit I bought and used was the SunFounder New Uno R3 Project Starter Kit For Arduino UNO R3 Mega2560 Mega328 Nano. This kit made a great starting point!