Day One of Microsoft Build

Today was the first real day of Microsoft’s Build conference taking place on the Microsoft campus. Focused on developers and modern app development, this seems to be the conference developers using Microsoft technologies go to since the PDC no longer happens. In fact, the 2000 or so slots for this year’s Build sold out in under an hour even without any agenda being provided. (Note I base the 2000 number on comments about the size of the tent used. I don’t know the actual number of attendees, but that number seems about right for a high-end number).

This is the second Build, and it follows last years in focusing a lot on Windows 8. Windows 8 was officially released three days ago. Since then, there have been four million upgrades. Companies like Dixon and Staples are indicating sales are better than forecasted. According to Microsoft, Windows 8 seems to be off to a good start.

At the first keynote today, Microsoft talked about the some of the devices and features that have come to market. Additionally, they showed some of the applications coming. In addition to Steve Ballmer and Steve Guggenheier covering Windows 8, Kevin Gallo also covered Windows Phone 8. I expect we will hear about Azure tomorrow. 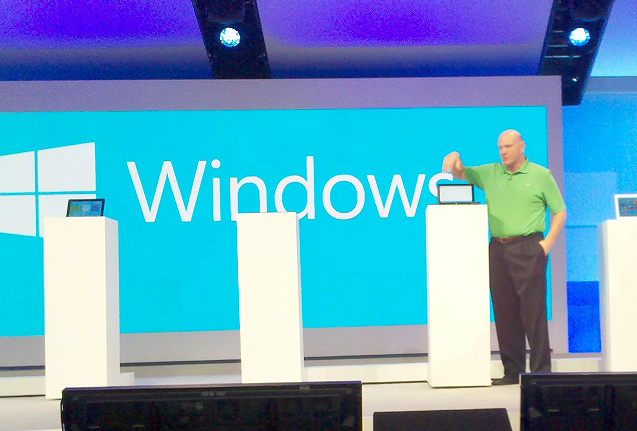 With Windows 8, Ballmer commented that they have the best PCs (hardware, software, and services) ever made. PCs and tablets are coming together, just as hardware for work and play are now harder to separate. New hardware for Windows 8 makes a better experience than the older hardware. This includes Windows 7 hardware. As such, while you can use Windows 7 machines to run Windows 8, you are likely to get a better experience buying new hardware.

Ballmer demonstrated a number of devices ranging from a Perceptive Pixel’s 82 inch touch screen to Windows 8 phones to tablets. The ASUS tablet was impressive with its 1.15lb factor and ARM processor. For developers, Ballmer indicated that the Acer Aspire S7-191 is likely the machine that developers will want. It is an ultra book with full touch. If one came my way, I’m sure I could find great use for it! 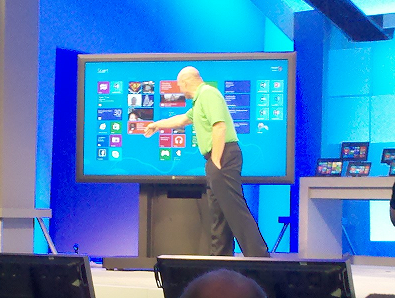 In the keynote, Ballmer talked about the Windows 8 Experience. He stated that Microsoft is providing a better experience with their operating system. Specifically, features such as Live tiles help to surface information that people are interested in seeing, without making the person dig into apps. The use of SkyDrive for storing information along with using a Microsoft account also improves user experience by allowing information to be synchronized across device and more. A third area where user experience is improved is with the integration of features such as search and share.

Windows Phone 8 actually launched yesterday. A lot of news came out at that time. The big news today on Windows Phone 8 is that the SDK is now publicly available. The SDK will include the APIs as well as Visual Studio, Blend, and the emulators. While there has been limited access to this SDK for a while, now it is open to all. Related to this news was an announcement that the fee for getting a Windows Store account would be reduced to $8 for the next 8 days. If you plan to build a Windows Phone application in the next several months and you don’t have a store account, then this is a chance to save a few dollars.

One of the things covered in a few sessions here at Build is the topic of building applications that can target Windows 8 and Windows Phone 8. There are a few sessions you should be able to stream once they are posted that will give tips and show how to create application projects that will be better able to target both platforms. This requires a little bit of tooling in your applications. The more you plan in advance, the easier it could potentially be.

Overall today’s keynote was unexceptional as far as Microsoft keynotes go. While a lot was said, little of it was new. Ballmer did a great job presenting, and it was great to see the devices; however, there wasn’t a lot of cool new programming technology highlighted and code was at a minimum. Tomorrow’s keynote is likely to cover Azure, and hopefully we’ll see a bit more code.

The most unexpected thing learned in the keynote today – Steve Ballmer stating he doesn’t type by touch! That will make a great trivia question!