Microsoft announced a release date of February 9th for the Surface Pro. This is the Surface machine everyone likely really wanted. In fact, many of the owners of the million Surface RT devices that have been sold will likely be wondering why their machine doesn’t seem so good.

The Surface with Windows 8 Pro will be powered by an Intel Core i5 processor, 64gb (or 128gb) of storage, a 10.6″ ClearType Full HD display at 1920×1080 pixels and 10-point multi-touch, lots of ports, lots of sensors, and more. Another nice addition to the spec is the inclusion of a pen. You can get the full specs on the Surface site at

In addition to the release date, Microsoft also announced a starting price of $899. On February 9th, you can expect it in the United States and Canada at the Microsoft Stores. In the U.S. it should also be available at BestBuy and Staples

You can find out more at the Official Microsoft Blog.

What is interesting in reading the spec on the Surface with Windows 8 Pro is that it seems very similar to the Samsung Series 7 devices that have been out for a while. The Surface is a bit small and lighter, but otherwise, a lot of the specification seems similar down to the pen. I also still find it interesting that the Surface specification page still doesn’t specifically state that this device runs a copy of Windows 8 Pro. While “Windows 8 Pro” is in the name, it is curious that Microsoft still doesn’t state the name of the operating system on their site (See picture below).

Regardless, this is the Surface machine that most people will want. It is the Microsoft machine that will let you get to the desktop, let’s you install Visual Studio, and let’s you run your Windows 7 apps.

It will be interesting to see if the price point of $899 is more than most people are willing to pay. We’ll find out soon enough since February 9th is not that far away! In fact, if you were looking to get me something for Valentine’s Day, feel free to send me a Surface with Windows 8 Pro! 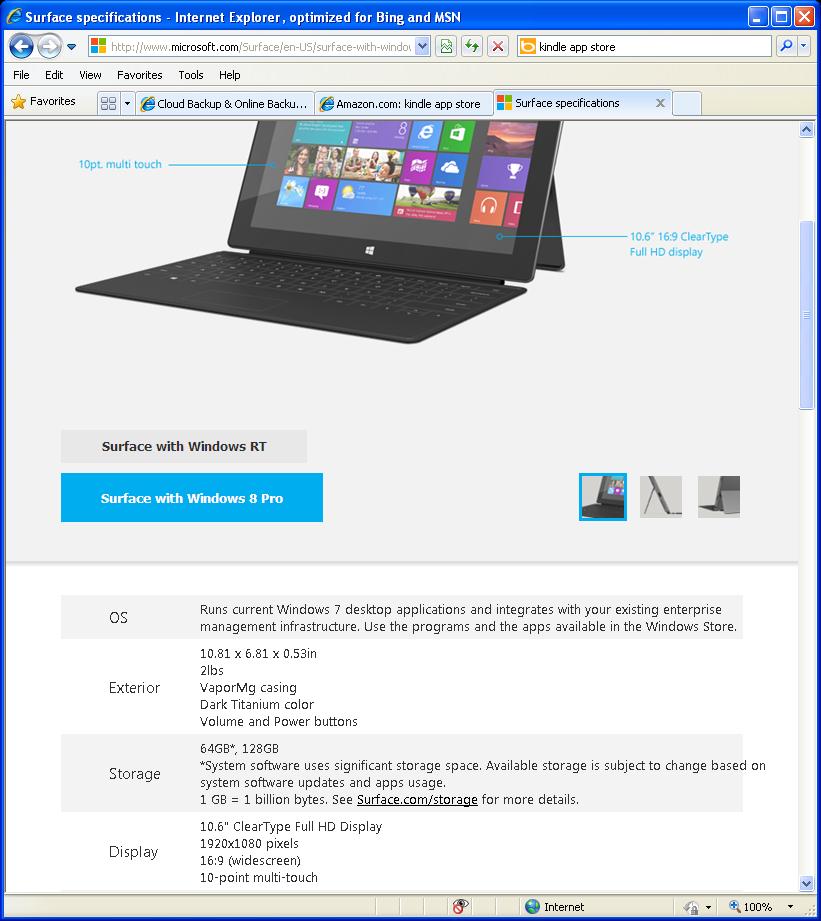