Visual Studio 2010 which is due to release soon comes with a series of changes when it comes to Visual C++. In this article I will talk about some of them, arguably the most important ones: the build system and IntelliSense. 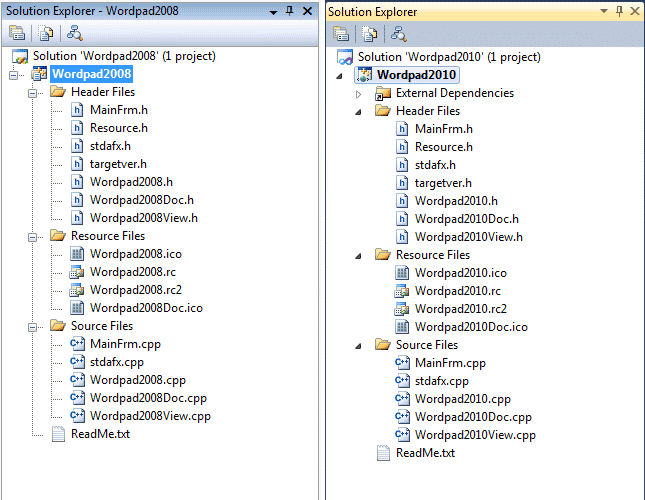 As you can see both versions contain the same solutions file (only the suffix in the name differs). The next image shows the files on disk, in comparison for the two solutions. 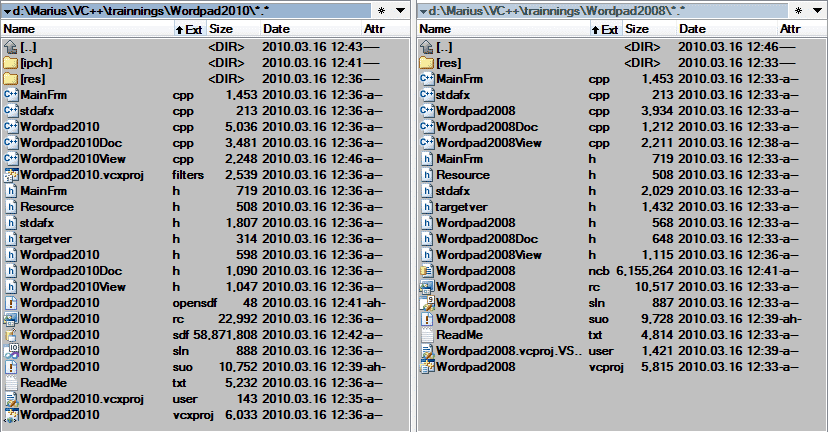 MSBuild uses XML project files, and the most important elements of a project are:

You can get a deeper overview on the MSBuild engine here.

Another thing to notice is the presence of a file called Wordpad2010.vcxproj.filters. This file defines the solution explorer tree with the files contained in the project. This used to be a part of the file project, but in Visual Studio 2010 it was moved into a separate file. The reason is to keep the project file only for the build, not for the organization of the project.

To summarize on the most important changes to the project files:

You can read more about these changes in MSDN.

The previous version of Visual Studio has introduced a the possibility to target different versions of the .NET framework. Using Visual Studio 2008 one could build the same project with .NET 2.0, 3.0 or 3.5.
As a result of the changes to the build system and project system, the new version introduces a similar feature for Visual C++. There are two types of multi-targeting: native and managed.

The managed multi-targeting allows to target different versions of the .NET framework for mixed-mode applications. This is actually not new, it was introduced in Visual Studio 2008 with the support for .NET multi-targeting.
By default the target version is the latest, 4.0. Unfortunately, by design, this can only be changed manually in the project file. The support for changing this from the IDE was not included in this version. Actually it was dropped, because in Visual Studio 2008 this was possible.

The native multi-targeting allows to use different versions of the tools and libraries to build (native) C++ projects. Of course, you must have the targeted toolset installed on your machine, in order to do that.
You can define different configurations that target different versions of the toolsets. The targeted toolset can be changed from project’s properties page, General, Platform Toolset. The following image shows the available options on a machine with Visual Studio 2008 SP1 and Visual Studio 2010 installed side by side.

A second important thing to notice in the comparison of the two solution is that the infamous .NCB file is no longer present in Visual Studio 2010 solution. Instead there is a new file with extension .SDF.
This is not just a renaming of the extension, the entire Intellisense for Visual C++ was redesigned in Visual Studio 2010. This is a SQL Server Database file, possible to be opened even in Visual Studio (if one wants to check its content).

In the previous versions of Visual C++, each time you modified a header, the entire solution was reparsed, in which time it was very hard to use the environment. Moreover, the IntelliSense database file (the .NCB file) never seem to shrink, only increased in size, and it could get corrupted from time to time.
In the new version, files are parsed on the background, and the IDE does not read all the files, only the current translation unit (which is a source file and all the headers it includes directly and indirectly). As a result, the operation is much swifter and less error prone.

There is also a new disk folder called iPCH in the new solution. This is the storing location for IntelliSense support files and browsing database files (SDF).

Part of the new IntelliSense and Browsing experience, the #include keyword supports auto-completion for the header files. That means that after typing #include, the IDE displays a list of available headers, filter by their name as you type. The following image shows this.

This features enables navigation through the code, showing the calls to and from a selected method, constructor or property. When selecting a call in the hierarchy window it shows the code where the call is made.

This is a feature that enables highlighting syntactic and semantic errors with a red squiggle line. Hovering the mouse over the line will show a balloon with the error message. The same error is also listed in the Error List window.

In the previous versions, this features displayed only the compiler verified results for a search. If you searched for a function M member of a class C it only returned the references where function M was used in the context of C.
The new version allows two types of search: one that is focus on speed, and returns all the matches for a symbol regardless the context (but it’s a narrowed search than the one performed with Find in Files), and one that is focused on accuracy and returns only the compiler verified results (i.e. the ones that match the search context). 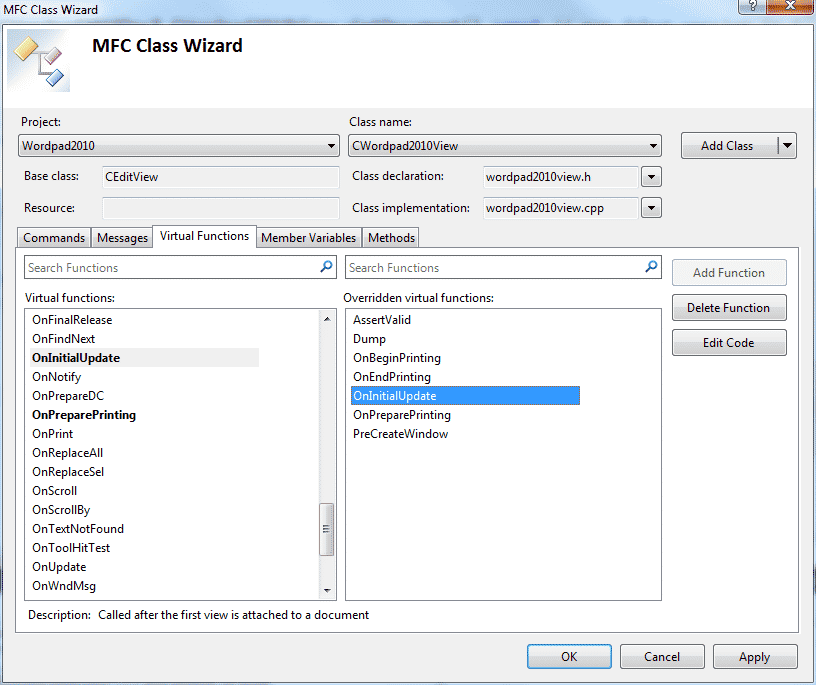 For those familiar with VC6, you know what to expect. It’s basically the same functionality, improved with search functionality.
For those not familiar with VC6 this is a single point to add or remove commands, message handlers, virtual functions, member variables and methods. This was a favorite feature in VC6 for a lot of people and there was a constant pressure on Microsoft to bring it back, so here it is.

This article touches some of the new features or changes to Visual Studio 2010 in regard to Visual C++, especially the new build system and the IntelliSense and browsing experience.
There is more to talk about changes to C++, MFC or deployment, but that will make the topic of other articles.

For more information on these topics see also: