You Doing Cloud? Cloud Infrastructure equipment revenues passed $70 Billion in 2016 according to Synergy Research. This accounts for public and private cloud hardware and software. Spending in the public could space continues to grow at a nice clip. Synergy Research indicated that the growth is at a “strong double-digit pace.”

Also of interest is that there is no clear winner in the cloud infrastructure space. In fact, Synergy Research Group shows that with the merger of EMC and Dell, there is now a three way tie for the leader in the space between Dell EMC, Cisco, and HPE with none of the m dominating the market. Microsoft and IBM also show up in the top, but not at the same level as the others.

It is a clear signal that with increased investments in the Infrastructure side of the Cloud, the platform is not going away. Developers that are not working to understand and adopt the cloud, run the risk of becoming obsolete! 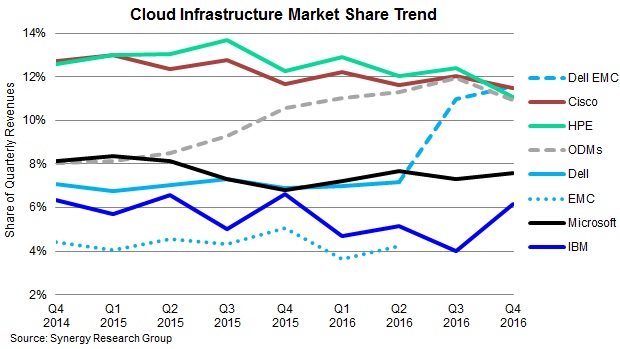