In the first three parts of this series, we laid the foundation for a project that connects the Raspberry Pi 2 with some kind of external hardware. For this demo, we’re going to build a working stoplight using red, yellow, and green LEDs. We’ll be using Python to create a timed operation that cycles through each LED at a pre-determined rate. All you need at this point is a prototyping board plus the LEDs, three resistors, and some hookup wire.

The Raspberry Pi implements a measure of control over I/O ports by requiring root privileges to change the state of an output port. This is due to the fact that the GPIO pins are actually memory mapped to /dev/mem. All this means is that you must run your Python code from the command prompt prefaced by the sudo command, as in:

Figure 1 shows how you can launch Python with the sudo command to accomplish the same thing. We’ll edit the initial version of our code using the Python 2 option from the Programming menu and then run it from the command line. Listing 1 shows the code for our stoplight program. 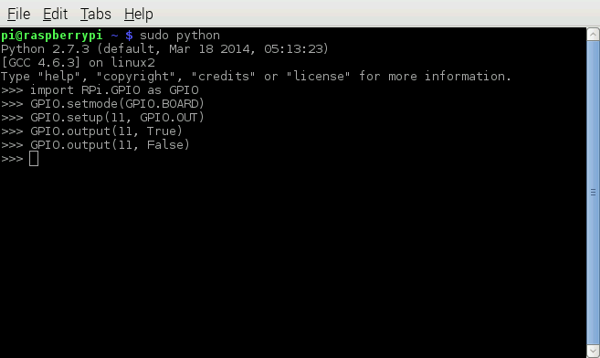 The first line in the listing is a technique found in many Linux utility programs using what’s called the shebang (#!). If found at the beginning of an executable file, Linux interprets this character sequence as an interpreter directive. In our case, it uses the /usr/bin/env Python command to launch the Python interpreter. This makes it possible to launch the script by simply typing ./StopLight.py. You do need to set the file’s permissions to include execute using the chmod +x command before this technique will work.

Looking at the second line in the code, you’ll see a reference to the GPIO library as discussed in Part 3 of this series. It allows our program to directly manipulate the I/O pins. Our LEDs are wired to GPIO pins 11,13, and 15 and accessed using the RED, YEL, and GRN variables. After configuring the pins for output, the program enters a try, except, finally loop to turn each LED on and then off, repetitively.

The last piece of the code uses the GPIO.cleanup() module to set the I/O pins back to an uninitialized state. If you don’t do this and then run the program again, you will see a warning message that the pins have already been configured.

That wraps up our four-part series on getting started with the Raspberry Pi 2. Now you have the basic tools to go out and build something interesting!

Read more
Previous articleVisual Studio Gets Crazy: Welcome to the Mac and Linux
Next articleDateTime Refresher