Using C# to Find Out What Your Computer is Made of

What do you know about the PC your currently sitting in front of, reading this on?

You probably know who built it, how many hard drives are in it, what it’s general speed is, the usual stuff. If you’re a bit more technical, you might know what type of CPU you have, or how many USB ports, but in most cases that would be about it.

It might surprise you, however, that there’s a bewildering amount more to be found out than just those basic details.

The .NET framework has classes and namespaces available that can find out some very, very surprising things about your PC. From information such as which patches and hotfixes have been applied through to the manufacturer of your PC’s BIOS, the amount of information you can find out should you want to is staggering.

In this post, we’ll take a high level view of some of what’s available, and make a small command line tool that can output various details both to the console and in a text file that you then can save.

There are two main places to find system information from on any Windows-based system. The first is System.Environment; the second is System.Managment.

system.managment, on the other hand, although reasonably easy to use, takes a little bit of getting used to, and generally requires you to do a lot of data processing to get at even just a handful of details. Where system.managment shines, however, is in the volume of information available.

Fire up Visual Studio, and create yourself a simple command line program.

Normally, if I’m not using them, I remove the Args argument from main, but I have an idea for that, in this post, so I’m leaving it present for the moment.

Add the following single line of code to your Main program section:

While you’re typing, you might see your IntelliSense pop open, showing you the different static properties available in he environment class:

Figure 2: IntelliSense is trying to help

If you run your command line program with just that single line in, you should see that it displays your current Windows version:

Let’s build out our code a little bit, and get our application to display more of our info.

If you now run this again, you’ll see there’s far more in there than there was before:

Let’s add some other code to our program: first, a class to hold our information, called “BasicInfo.cs”, as follows:

Remember to change the namespace to fit your own project. Note also that we’ve added an overridden “ToString” method to format our object as a string. You’ll see why in just a moment.

With this class, let’s now fill it in with the values we want, rather than displaying them:

This code should give us the display we had previously.

Figure 5: Installing “Newtonsoft.Json” into your project

Then change this line:

in your program, to this:

and if everything has worked, you should get the following: 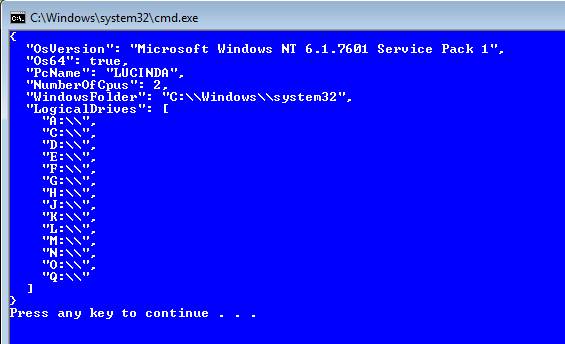 Which, as you can see, is now formatted in an output suitable to be sent to a web page as Json Data ready for display.

One more final tweak to our program results in this code:

If you now run this, you should get your first version of the output, but if you now run the program and specify “-j” after it, you’ll get the Json output.

Why is this useful? Well, you now have a small program, that can be used to create a Json file with system info in a web site. Simply by running:

in a folder that your web server can see. You’re now able to generate a Json file that you can then use JavaScript or some other web technology to load and display in a web page.

Now you could, in theory, simply just make the appropriate calls to read the data you want, directly in your web applications code using regular C#, and this would work great for something as simple (and more importantly as quick) as System.Environment, but once you start playing with System.Managment, you’ll quickly see that in some cases it can easily take 5, 10, 15 seconds or longer to get some of the information back you request.

Now, doing this in real time in a web application is a big no, no because it’ll severely delay your page response time. A better approach is, instead, to have a small command line application that is run on a regular schedule, say once every 12 hours, and produces this small Json file for your application to use.

A Quick Look at System.Managment

There’s simply not enough space in these posts to cover everything that the system.managment namespace can find out for you. Accessing it is not hard, but it’s quite strange if you’ve not seen the way it’s done before.

Before you start, however, you need to add a reference to “System.Managment” to your program by using an add reference from your References right-click menu.

Instead, there are 430 property access strings that you use to request the information subset that your interested in. For example, if you want to know what your CPU can do, you need to ask for information in the

You access the data by creating a ManagmentClass object as follows:

and then a property accessor for that class:

Which you can then loop through, using two nested for-each loops:

The ‘property’ variable exposed in the inner loop will hold things like the property key name and an accessor for the value, and value type.

You could at this point use some reflection, or a mapper of some kind, to then hydrate your own concrete base classes. For purposes of demonstration, however, I’m just going to use a dictionary.

Putting all of this together, we can use the following code to get a dictionary of our CPU information:

Which, when run on my machine, gives me: 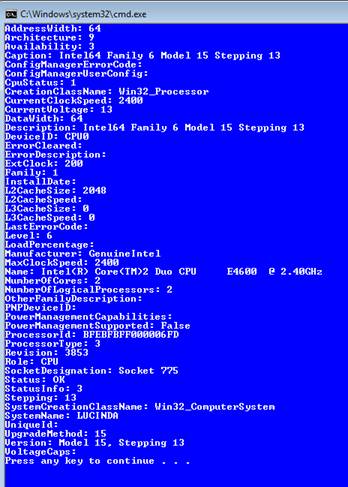 I’m not going to repeat a full list of known classes in this post. Instead, you can find them all listed on MSDN right here:

I’ll leave turning the dictionary into a set of objects up to you.

Got a .NET itch you can’t quite scratch? Gimme a shout; you usually can find me lurking around Twitter as @shawty_ds or just leave a comment below.

Read more
Previous articleBug Buster 001: Can You Bust the Bug?
Next articleGetting Started with Roslyn