However it’s used, the intention is for the method being called not be the method that actually handles the request.

The delegation pattern is in itself a very simple pattern. Generally, you’ll mirror the input data from the called method into an identically typed method signature.

If you don’t pass the called method off on to an identically typed method signature, you’re using the “Adapter Pattern” or maybe a derivative of the “Bridge Pattern,” both of which change the method signature called.

One place where you’ll very often find the delegation pattern used is in Async-based operations. For example, you may call a method to “Download A File,” and that method may fire off a “Task” that returns when the download has finished.

Your simple download method, to the consuming code, just looks like a simple call that returns a string. Behind the scenes, however, that simple function spins off a thread or Async call whose actual call is masked by the called method. 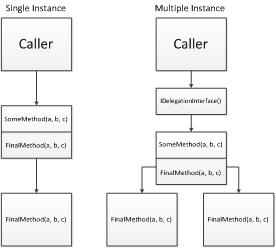 Code for the caller

Implementing a multiple call is not much different, except that our delegation class derives from an interface, rather than from a concrete object. Because an interface is used, the implementation to call can, if desired, be changed at run time.

Then, we simply create our final classes to derive from this interface, and modify the delegate caller as required.