The prototype design pattern seeks to provide a single unitary interface to a single class type, all while allowing the underlying class type to be different.

This has a number of uses. For example, the GOF book illustrates the pattern through the use of a “Graphical Object,” which can be used to create “Staves,” “Notes,” and “Time Signatures” in a music score editing application.

Underneath the hood, the client application can refer to everything as a “Graphical Object” that has a known set of methods and properties such as “Draw()” and “Colour,” but is capable of drawing very different objects using just those known base elements.

Another interesting example of its use could lie in an electronic logic simulator, where user circuits built up from lower level components could be loaded into the application, and used as sub circuits in a larger design.

Each circuit, irrespective of its underlying type, could be instantiated and represented as a “SubCircuit” but have drastically different inner workings under the covers. 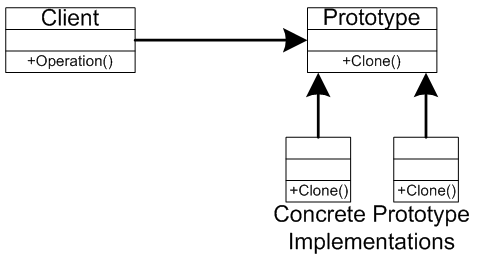 Client: This is the consumer requesting the prototype object

Prototype: This is an interface or an abstractly defined class representing the single class type

Concrete Prototype: These are the actual implementations returned by the prototype master

The prototype itself, however, usually is just the “structure”. The actual implementations are provided by actual classes that either follow a contract-based interface, or are abstracted from the super object; in this example, “Race Car” and “Saloon Car.”

To start with, the main prototype may look something like the following:

Here, we stamp out the base class type, and make sure that the basic information we might hold is represented, and that we have in place a ‘Clone’ method to clone our object.

Concrete prototypes may then in turn look something like the following:

You only need to implement the Clone operation to make this a prototypical instance, but the clone can have any manner of other options attached to it after the fact.

There is an inherent danger to be aware of, however, and that’s the subject of how deep the copy goes.

Memberwise Clone will create what is known as a shallow copy.

This means that your first level objects such as the “TopSpeed,” “EngineSize,” and “Colour” properties shown above will be copied faithfully into an entirely separate and new instance of the object when it’s cloned.

Any sub objects, however, will have their “Reference” cloned, but not an actual copy.

What this means in practice is that if you have any nested objects, which you then take a clone of as part of the parent object, a change to the property on the new clone will also update the same instance on the parent.

To make the clone work in a “Deep” fashion, you not only need to make a copy using a Memberwise clone, but you then need to “new” up a new copy of the sub object, then manually copy the values across, like so

Doing this ensures that you detach the embedded class from the copy attached to the master prototype, and then make sure it has the same values as previous.

In many cases, it makes more sense, especially under .NET, to use interfaces to create a prototypical instance. The pattern is closely related and in many ways a competitor to the “Abstract Factory” pattern. Generally, however when using the Prototype pattern you would manage object creation via a “Prototype Manager” that would keep close tracking on which patterns are used and where.

If you have a Design Pattern you’d like to see implemented in C#. drop me a comment below. Until next month, practice makes perfect.

Read more
Previous articleComparing the stdio and iostream C++ Libraries
Next articleGetting Started with Visual Basic: Getting the VB Software