How Many Computer Programmers Are There?

How Much Are Computer Programmers Paid?

How Many Software Developers Are There?

The U.S. Bureau of Labor Statistics combines software developers with quality assurance analysts and testers, so this impacts the numbers a little bit. Even so, the employment numbers in 2019 were 1,469,200, or almost seven times that of computer programmers. More importantly, these roles are expected to grow to reach 1,785,200 by 2029. That’s an increase of 316,000 positions or 22%.

How Much Are Software Developers Paid?

For the grouping of software developers, quality assurance analysts, and testers, the median pay as of May 2020 was $110,140, which is notably higher than that of the computer programmer. Additionally, the top 10% of software developers’ wages start at $170,100 or higher, whereas the bottom 10% is at $65,210 and lower.

Programmers Compared to Other IT Occupations?

This list also includes a couple of roles that make less than computer programmers as well. 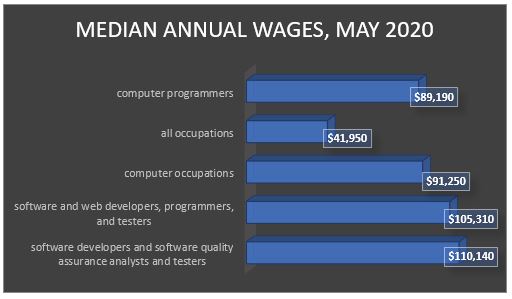 In looking at the data from the U. S. Bureau of Labor Statistics, one thing is clear. It is more important to position yourself as a software developer rather than a computer programmer when it comes to salary and job outlook. With a median wage difference of over $20,000 and a positive rather than negative job outlook, software developer is the role to focus upon. While some might not think there is a difference between being called a computer programmer versus a software developer, clearly, the wages – and the future – tell a different story.