Microsoft Windows has been around for 35 years and is now used by billions. Referenced by Microsoft as the “Windows of tomorrow”, Windows 11 builds a place or space that feels familiar for creating, learning, playing, producing, and connecting in all-new ways. Microsoft claims it is the Windows that brings you closer to the things you love.

Today Microsoft introduced Windows 11 to the public. They covered an overview of what can be expected from this new release of their operating system. 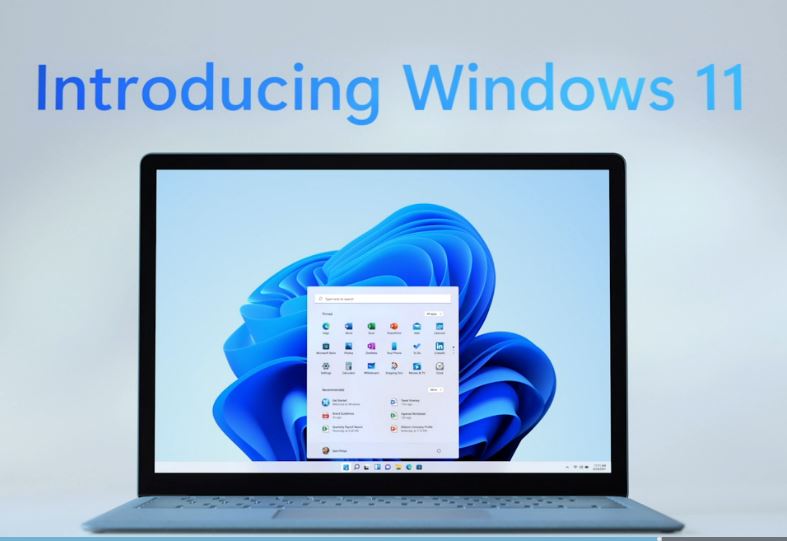 New features include all new themes, the ability to snap your apps, productivity tools to make things easier for you, including the ability to move around and still pick up with where you left off, the ability to connect with a single touch, and the ability to personalize your feeds with widgets. The operating system will also automatically adapt to the way you input, whether it be typing on a keyboard, touch, voice, clicking with the mouse, or writing. Additionally, the gaming experience has been improved with features such as DirectX 12 Ultimate and Auto HDR. There is also access to the Xbox Gaming pass and a new Windows Store.

“Modern, fresh, clean, and beautiful” is how Microsoft describes it, but each person will have to determine that on their own. Ironically, Microsoft states that they put Start at the center of the new version of Windows, almost literally. The buttons in the taskbar, along with the start button, are now centered in the taskbar of Windows 11.

Microsoft states that Windows 11 is simplified and “cloud-powered”. 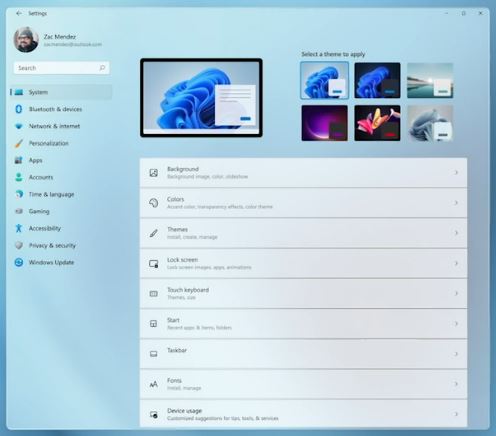 Icons, colors, textures, and pixel-level details were reviewed and tuned. This was to help get the content within Windows to stand out, whether in light mode or dark mode. In windows and controls, corners of the images were rounded to make the visuals softer. 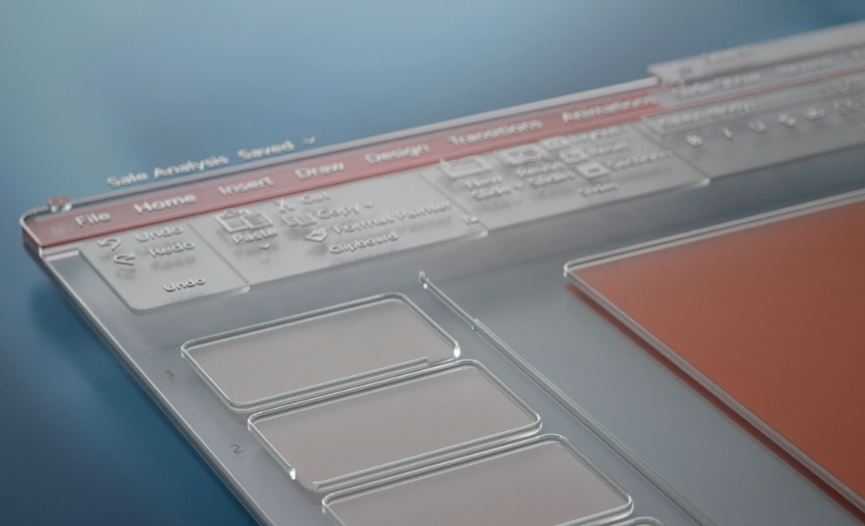 These visuals enhancements apply to applications that get opened as well. Some of the visual enhancements include semitransparent backgrounds so you can see where things are. There are also improvements in transitions as well.

Windows 11 is faster waking from sleep, has a faster “Windows Hello” process, and faster browsing on Edge or any other browser. Windows updates are 40% small and more efficient since they happen in the background. Windows will use less energy, thus increasing battery life. Additionally, Windows 11 has been made more secure.

Windows 11 also has a new Start menu, as shown in the following figure. Like the buttons on the taskbar mentioned before, the layout of the Start menu is also more centered. It is optimized for what you are doing, including a recommended section to help you jump back to things you’ve been doing, such as editing. The Start menu also taps into the cloud. This means it will help you access your recent files no matter what platform or device you were accessing them from before. 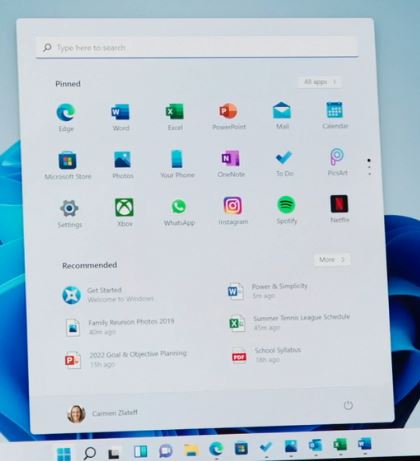 Microsoft has added new multi-tasking experiences to Windows 11 as well. This includes the ability to snap windows to the side. In Windows 11, they have added Snap Layouts. This allows you to organize windows in predefined groups, making it quicker and easier to set up your working space. 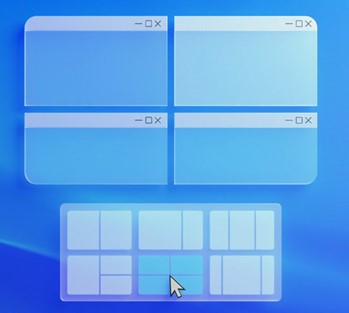 In addition to Snap Layouts, they have added Snap Groups. This allows you to save the layout and apps that are on your screen so that you can easily get back to that layout. This means if you get interrupted or turn off the machine, you can get back to your screen layout without the need to move windows around again manually. Windows remembers and lets you get back to where you were by clicking an icon on the taskbar. This means you switch between an app as well as entire projects. You can bring multiple windows back together.

If you use multiple monitors, which many developers do, and you disconnect your system from a monitor, then Windows 11 will minimize the removed monitor to your taskbar (one of those groups just mentioned). When you plug a monitor back in, Windows 11 will restore what was on the monitor, including positioning.

There are two ways provided to help you know where you are. First is the addition of vertical tabs. By listing tabs vertically, it is easier to read what the tabs go to. The second is desktops. Desktops help you organize what you have on your screen based on what you are doing. You can have one for work, one for home, and one for gaming. These are basically customized desktops that you can swap between.

Microsoft Teams has now been directly integrated into windows. This allows people to connect to others regardless of what device the others are using. This allows connecting to others with just a couple of clicks.

Windows Widgets is a new personalized feed powered by AI. This allows you to get curated content. This content can be seen without interfering with what you are doing. This is done by sliding over existing content on your screen. 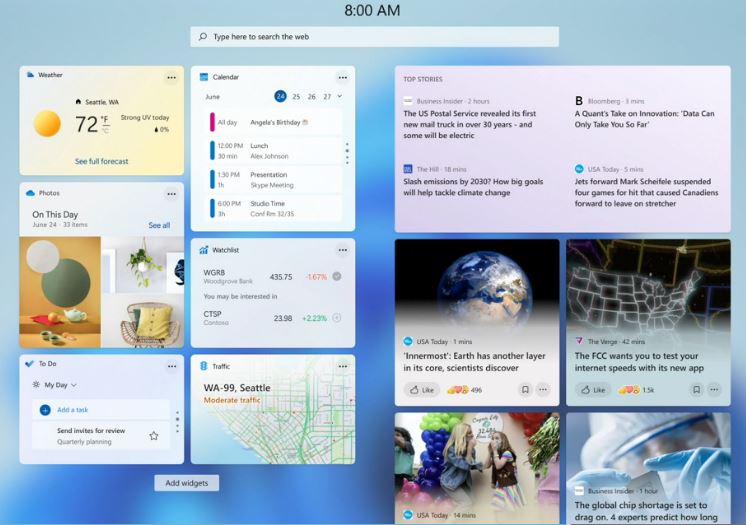 Widgets can include weather traffic and news. The news widget can adapt to what you like based on what news you read and follow.

Windows Without a Keyboard

If you’ve switched from standard mode to tablet mode with a 2-n-1 or other device, then you know it isn’t the smoothest transition. The layout, icons, and other features can change. With Windows 11, they’ve worked to make the transition from one to the other better. This means a more consistent taskbar where the icons simply adjust in spacing to make them easier to touch. It also means incorporating gestures on the screen that match the gestures used on a touchpad. There are many other adjustments as well, but these are made to smooth the transition.

Also improved is the interaction of a digital pen. The online digital keyboard has also been updated. Voice typing has also improved and includes automatic punctuation and voice commands.

Gaming is considered fundamental to Windows. This is for both creators and players. With hundreds of millions of people playing games, the focus was on graphics, speeds, and a good collection of games. The addition of Auto HDR to Windows 11 automatically updates game lighting and color to a high dynamic range. This is the same technology that has been added to Xbox consoles. High graphics games should look better without the player or creators doing anything.

The addition of the Direct Storage API to Windows 11 (also taken from the newer Xbox consoles) brings speed improvements to Windows 11 by maximizing throughput and CPU performance. This allows games and graphics programs to load assets directly to the graphics card without draining or bogging down the main CPU. This improves rendering time. Windows 11 PCs are preconfigured with this to simply work.

Xbox Game pass is also built into Windows 11. This, however, is a subscription-based product.

Microsoft has also updated the Windows Store. The updates are for speed and ease of use.

One specific area that was updated in the Windows Store is the entertainment tab. It was updated to be able to bring you the top television shows and top movies from across streaming services all in one place. When viewing entertainment programs from the store, you can choose to view locally, or you can use Wireless Connect to project to your television.

In addition to the overhauls for speed and use, Microsoft has stated they want to make it easier for developers to bring their apps to the store, whether the apps are PWA, Win32, or UWP. They also are letting you continue to use their commerce engine with a revenue share, or you can bring your own Commerce Engine to the Windows store. If you use your own commerce store, then you keep all your revenue.

Android Apps are coming directly to Windows 11 (finally). They can be added to the start menu and taskbar, so they can be integrated into what you are doing. Android apps are discoverable through the Microsoft Store by using the Amazon Appstore. Intel app technology is used to make integration of android apps. The Microsoft store is working to be more open to allowing people to use any app they want.

Hardware partners are ready for Windows 11. Things like battery life, performance, touch, pen are all being designed into Windows 11 from the start. Windows has the largest hardware ecosystem. This includes products like Dell, Lenovo, Surface, and more. Windows 11 ready PCs should be available today.

Three things About Windows 11 According to Satya Nadella

Satya Nadella, CEO for Microsoft, commented that Windows 11 is a new generation of Widows with everything reimagined. There are three clear opportunities with Windows going forward:

Satya commented that this is the first version of a new era of Windows. As it becomes available, we’ll have to make our own determinations on whether it truly is a new era or simply a continuation of what we’ve seen in Windows 10.