C++ developers tend to be partial to their editors and might consider Visual Studio Code (VSCode) as a lightweight tool not worthy of their attention. Having said that, they could be wrong! More importantly, people looking to learn C or C++ from ground zero might find many editors to be so overloaded with features that it distracts from learning the core language. Although a full-blown version of Visual Studio, such as Visual Studio Community Edition, can be great tool for doing C and C++ coding, there are many times when it can be overkill. With the addition of the C/C++ extension to Visual Studio Code, you might have what is needed in a small, cross-platform editor.

Even though support for JavaScript, HTML, and a few other languages are included with the basic download, others require that you add an extension. There is an extension for Visual Code for C/C++ that can be installed from the Visual Studio Marketplace.

The extension includes support for code formatting, auto-completion, debugging, and a lot more. You can get many of the details either from the marketplace or from the Microsoft C/C++ extension for VSCode documentation page.

Figure 1 presents what is seen at this URL. As you can see in the figure, a simple click of Install should start the installation of the C/C++ extension. 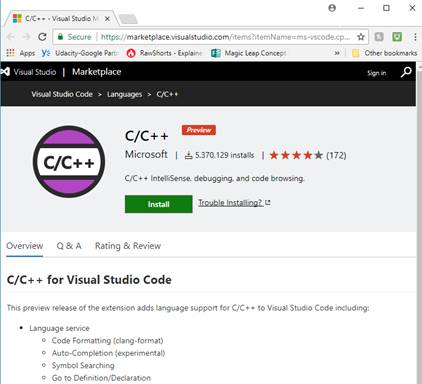 Figure 1: The Marketplace listing for the C++ Extension 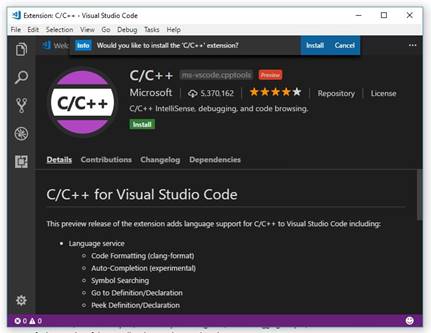 Once you’ve added this extension, you’ll be able to enter C/C++ programs in VSCode. You’ll also see that the editor supports many of the features mentioned earlier. Figure 3 shows the Visual Studio Code with a code listing included. 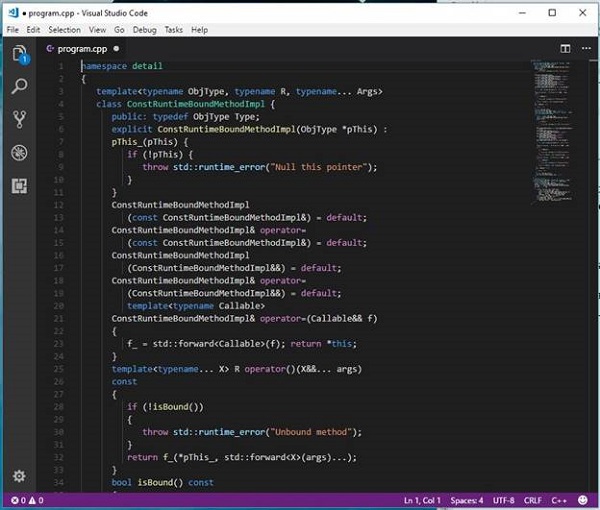 Other C++ Extensions for VSCode

In addition to the basic C/C++ coding extension for Visual Studio Code, there are several other C++ extensions that can be used with the editor. These include:

You can find extensions that can be added by clicking the extension’s icon on the left and then entering C++ in the search box. This will list the extensions, similar to what is shown in Figure 4. 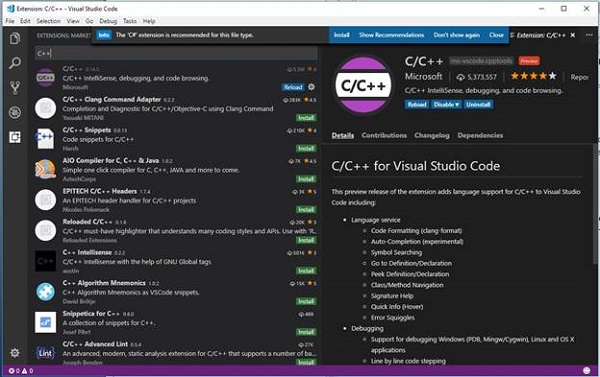 Clicking the extension name will present additional information on the right side of the editor window. The description also should include a link to install, reload, or disable the extension.

Visual Studio Code is primarily an editor that can be extended. As such, even though it easily can be used to run JavaScript or display HTML, it is a bit more difficult to run code that requires a build process. To execute your C++ code, you need to compile the source code you enter into an executable file containing native code. Native code is dependent upon your specific operating system. This means that, although you can use VSCode on a variety of platforms, you’ll need to find a compiler that works on the operating system you are targeting. Compilers such as GCC are often the choice used with VSCode. Installing GCC for use with VSCode is a topic for a future article.

Even though Microsoft offers Visual Studio Community at no cost, there are times when that is overkill or more than is needed. Visual Studio Code offers an open source, cross-platform editor that has a relatively small footprint. With the addition of extensions, VSCode is a great tool for quickly accessing and editing C++ code, whether you are a beginner or an advanced developer. With the addition of an open source compiler that is native to your platform, you can use VSCode as a complete tool for building your C++ solutions.