What Microsoft Said was Coming: New APIs, Bots, and More 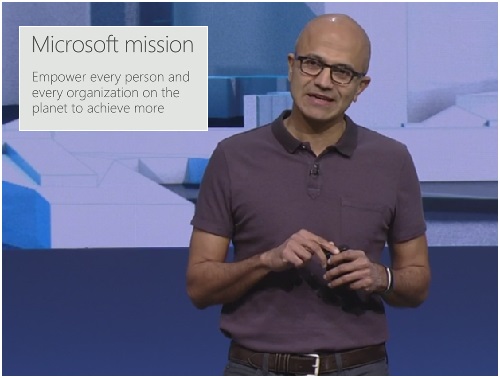 What Microsoft Said was Coming: New APIs, Bots, and More

At Microsoft’s Build Conference, the focus is on what Microsoft plans for developers for the future including the coming year. While there weren’t a lot of “Wows!” from the presentations this year, there were some interesting tidbits that showed where Microsoft is focusing. While it has been a couple months since the show, the importance of the announcements is still there. As such, it is worth taking a look again at the core things Microsoft announced. 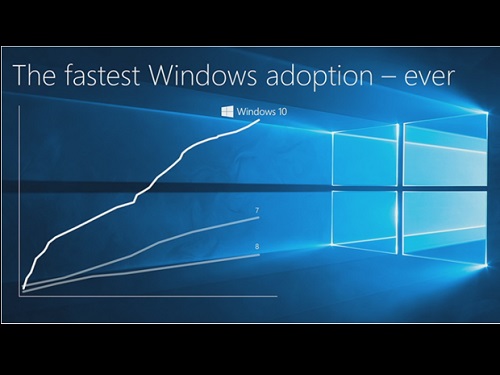 It is only fitting that Microsoft would give an update on the adoption of Windows 10. There were a number of interesting statistics presented at Build: 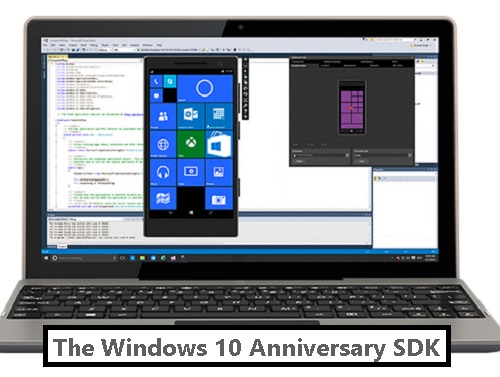 The preview was announced for the Windows 10 Anniversary SDK (aka. Windows 10 “Redstone”), which will contains over 1000 new features and APIs. Enhancements include better ways to connect to devices including a new Action Center in the Cloud. There is more extensibility for Cortana. There are updates to how applications will run, specifically in the background. There will be better support for App extensions.

Windows 10 Anniversary is expected to release this summer as a free update to Windows 10. The current speculated date is around July 29th. 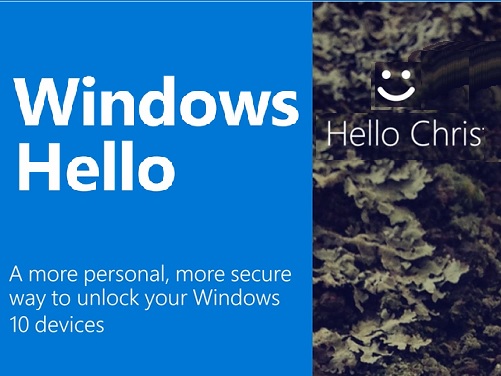 Windows Hello was a new part of Windows 10 that allowed you to use facial recognition and biometrics as a part of your computer’s security. With the Windows 10 Anniversary updates, there will be an update to the biometrics s well. Developers will be able to extend Windows Hello security into their applications. Microsoft is already building this into the Microsoft Edge browser. 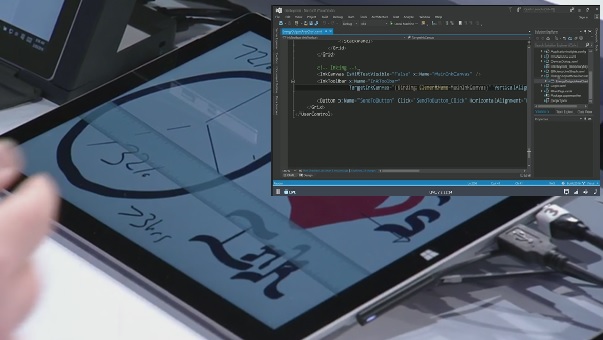 Microsoft is continuing to improve inking in Windows. With the Anniversary update to Windows 10, ink is being pushed front and center with the Microsoft striving to make it as easy to use as pen and paper. Microsoft is creating a highlighted pen area in the Windows Store so that it is easier to find ink supported apps. At Microsoft Build, stencils and rulers were highlighted within apps. Also shown was the fact that inking can be added to application with as little as two lines of code. 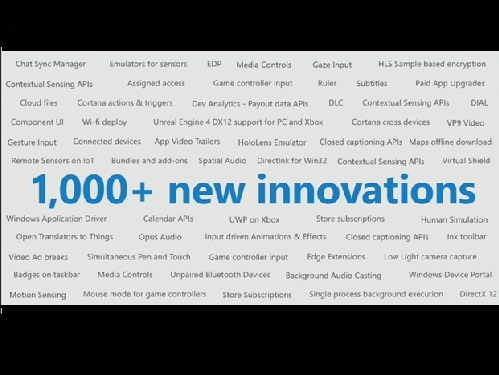 The Universal Windows Platform has a focus on allowing developers to target Windows and have an application that is easily used on multiple devices. With Windows Anniversary, Microsoft has made over a thousand changes to the APIs and features. 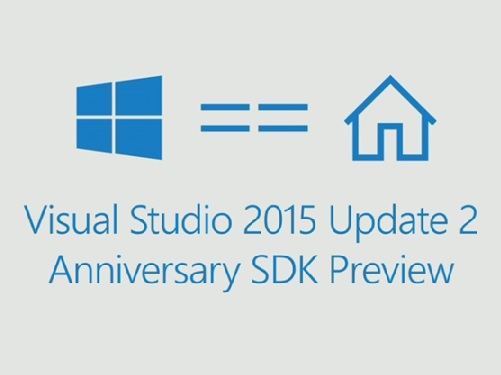 With a new or major release of an operating system, it is no surprise that there is also an update to the development tools. With Windows 10 Anniversary, not only can developer expect an updated SDK with the Anniversary SDK Preview, but also Visual Studio 2015 Update 2. 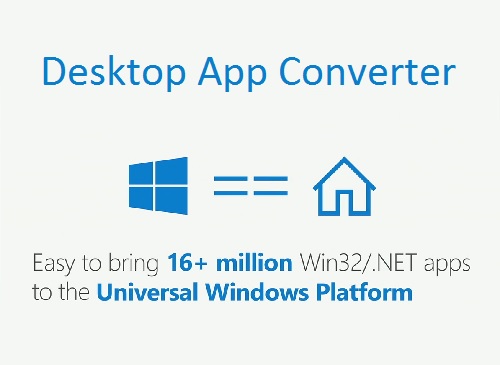 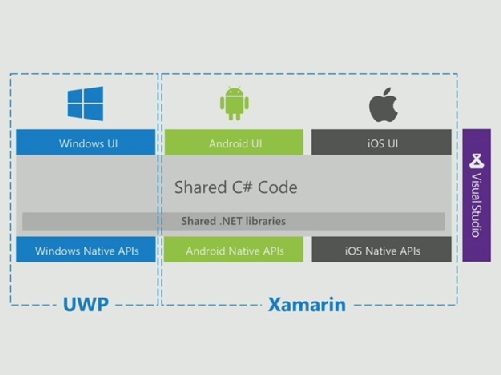 Microsoft has promoted the building of Universal Windows Applications to make it the easiest to build single solution projects that can be targeted to multiple platforms. When it comes to mobile development, there have been a couple of additional tools that get mentioned to make it easier to target Android and iOS, but none as much as Xamarin in recent years. Using Xamarin, C# developers can target not only Windows, but Android and iOS. At Build, Microsoft announced the further integration of Xamarin with Universal Windows and Visual Studio. In fact, Xamarin is now included with Visual Studio. 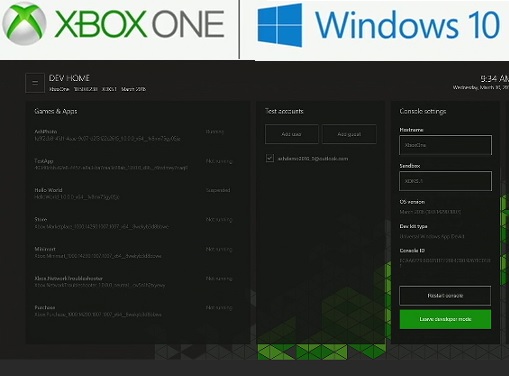 One of the areas that Microsoft has talked about when mentioning cross-platform development is gaming and the Xbox One. The Xbox One platform has been aligned with Windows. Now Microsoft has created a Dev Mode Activation App that can be downloaded from the App Store and ran on an Xbox One. This application will allow you to reboot your Xbox One into a Dev Mode, which will allow you to build and execute Visual Studio solutions on your Xbox One. You’ll then be able to deploy through Visual Studio, and test an application on the Xbox just like any other device.

Aligned to this update will be updates to controls and features in Windows to automatically support Xbox controllers in addition to the mouse, touch, pen, and such. 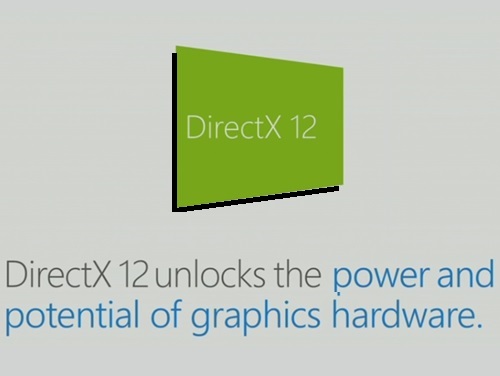 The Power of DirectX 12 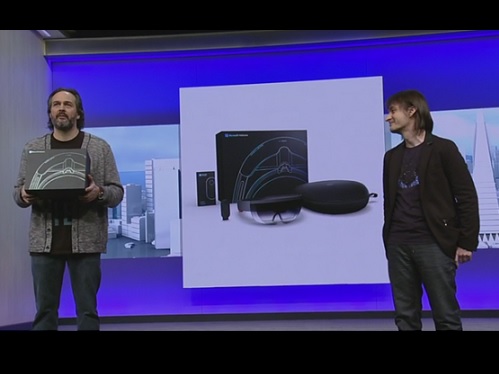 Kudo Tsunoda and Alex Kipman displayed the HoloLens Developer Kit and announced that it was shipping. The kit, which runs $3000 (US) has been eagerly anticipated by developers. Microsoft had done a “Share Your Idea” event where they asked the community to suggest ideas (I suggested they build a Starship Holodeck application). Over 5,000 ideas were submitted. 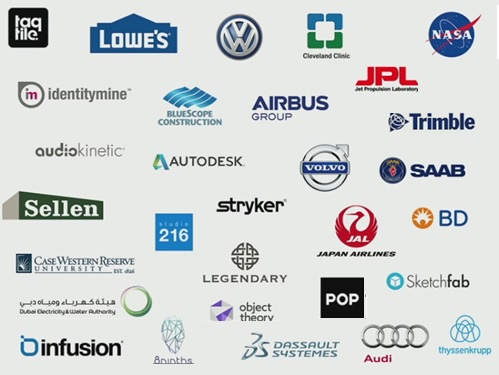 While HoloLens might seem like hype at this point, Microsoft was quick to point out that a number of companies are already developing solutions targeting it. This included companies ranging from Lowe’s to SAAB to NASA. Microsoft took time to show a demo from Case Western Reserve University where they are working on medical applications as well as telepresence using HoloLens. 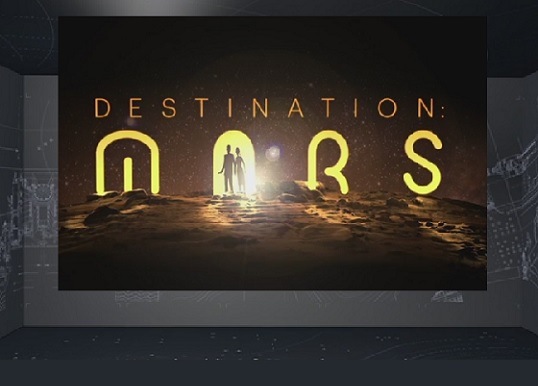 NASA’s Use of HoloLens

NASA is one of the companies that Microsoft has been talking about for as long as they have been public with the HoloLens. At Build, it was stated that NASA is creating “Destination: Mars” to be hosted at the Kennedy Space Station Visitor Complex. It will be hosted by a hologram of Buzz Aldrin. 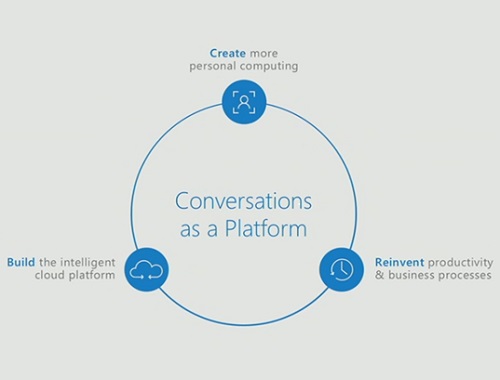 Conversation as a Platform

Microsoft presented the idea of Conversation as a Platform. This is a topic worthy of an entire article on its own. In short, it is a focus on infusing intelligence from everywhere with a focus on three core principles: augmenting human abilities and experiences, building trustworthiness, and having a focus on being inclusive and respectful. 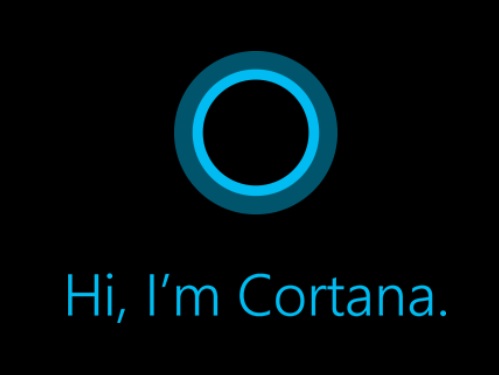 Cortana, Microsoft’s PDA, was introduced about 2 years ago. Today it answers about 1 million voice questions each day. Additionally, there are nearly 1000 applications that integrate with Cortana voice. Microsoft continues to evolve Cortana. Additionally, they’ve opened up a Cortana Developer Preview that developers can request an invitation to use. By integrating with Cortana, you’ll be able to integrate voice commands and more. You can also integrate commands into Cortana’s interface that will allow users to launch or deep link into your application as well as do things such as execute commands or open specific pages. 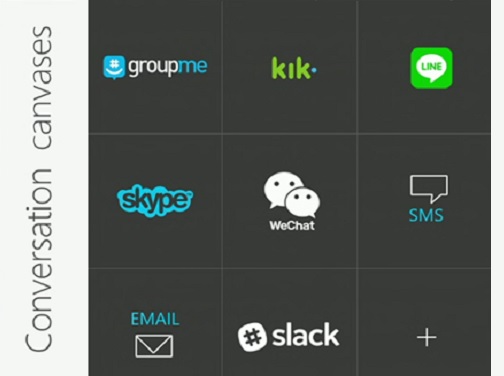 With over 3 billion minutes of voice conversations on Skype every day, it is no surprise that Microsoft is continuing to invest in Skype. In addition to showing Skype integration with HoloLens, Microsoft also provided an emphasis on conversations as well as adding PDAs and Bots to Skype. This addition of intelligence should result in a smarter, more helpful and entertaining experienced using Skype. A new Skype for Business App SDK and Skype Web SDK have also been announced.

With Microsoft’s announced acquisition, you can expect that Skype will be extended into LinkedIn as well. 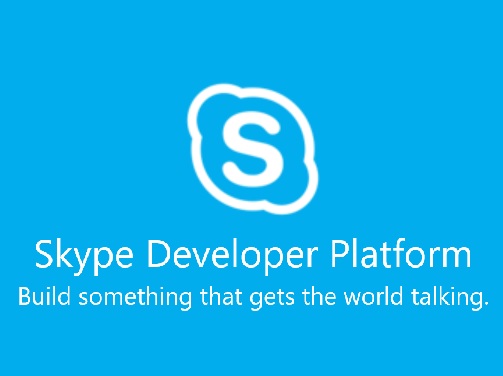 Bot are little intelligent programs that can be kicked off to execute a task. You can create a bot to look up data, execute a task, look up information, or do a variety of tasks. Microsoft is not only incorporating bots into Skype, but they are also opening up the Skype Bots SDK so developers can build their own bots. Skype consumers will be able to access bots not only from the latest version of Windows, but also from Android and iOS apps. 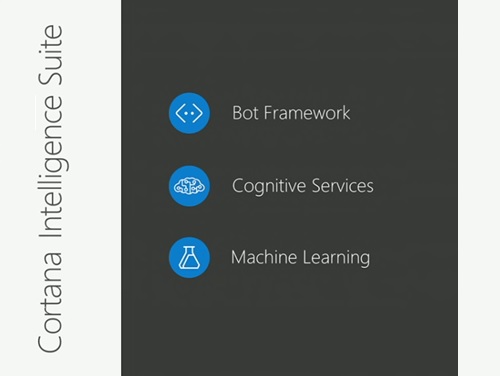 Microsoft also has presented the Cortana Intelligence Suite. This includes a Bot Framework for building bots. Also included are Cognitive Services, which are micro services for helping you build apps that can have an understand languages, understand speech, and even build computer vision into your apps. This includes rich machine learning as well. The end result is that developers will have the tools to build bots for a lot of conversational canvases. Microsoft indicated that they believe that these services will be core to building new applications, just as the .NET Framework was core a decade ago. 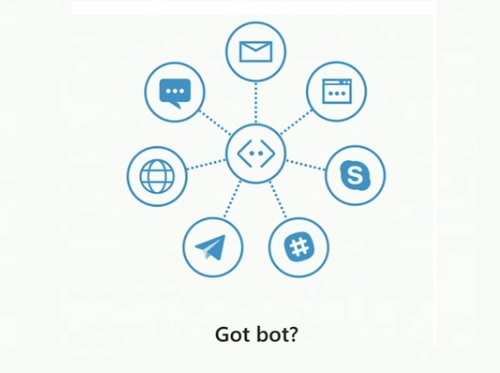 Microsoft presented the Bot Framework, which can be found at http://dev.botframework.com. The Microsoft Bot Framework provides developers with a framework to build intelligent bots that can interact with users in a way that is more natural. The framework contains a Bo Connector, Bot Builder SDKs, and a Bot Directory. With things like automatic translation, conversation state management, chats, and more. 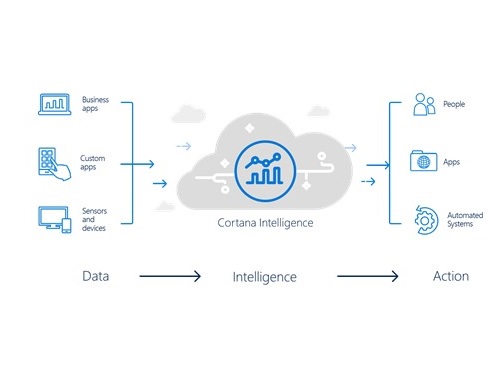 Microsoft has had a focus on machine learning. With their cognitive tools, they are bringing the power of what they’ve learned to developers. This includes providing algorithms that can be added to applications that will work across devices and platforms. These APIs will provide you with the ability to get machine learning intelligence using just a few lines of code. The free applications include Vision APIs that let you obtain information from images, the Emotion API that lets you recognize emotions from images and video, the Face API for working with faces in photos, a Video API for analyzing and processing videos from within apps, speech APIs for doing a variety of things ranging from speaker recognition, converting speech to text, and more. There are a variety of other APIs that are also a part of the cognitive tools that can be found at https://www.microsoft.com/cognitive-services.

This slide show covered what Microsoft presented in just one day of Microsoft Build earlier this year. This was a lot of information and tool announcements all in one day! Microsoft stated that some of this information is as important as technologies such as .NET. It will be interesting to see how this evolves as we move further into summer and the new releases.