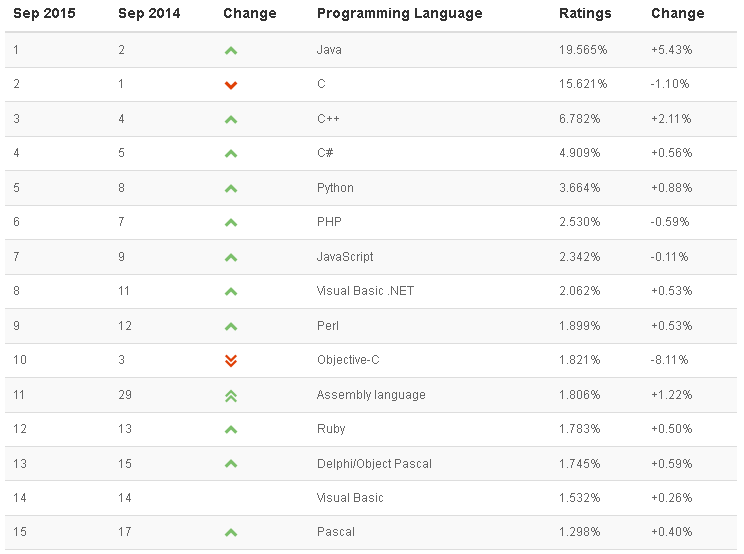 A long time ago, we posted Tiobe index listings on a regular basis. The Tiobe indexes showed the popularity of programming languages in the industry. You can see their site for specifics on how the measure popularity, but in short it centers on searching and other factors.

Each month a new update is posted. Most recently it has been interesting to watch as C and Java have vied for the top spot. While the last couple of months Java has taken the top position, earlier this year C was on top. The following slides show the charts from Tiobe Software for some of the top languages used by members of Codeguru.

C++ is one of the most popular languages used by members of Codeguru. While C++ has seen a nice uptick in popularity in the last year, this comes after many years of decline. Even with the uptick, popularity is still lower than it was in 2013.

Java is the Most Popular

Java has had a slight decline overall on the Tiobe index; however, this past several months, there has been a spike up on its popularity that came after a pretty big drop. Overall, it remains the champion when it comes to popularity on the Tiobe index. Is this simply because it has higher search volume due to its complexity or because the language is used by the biggest group of developers? 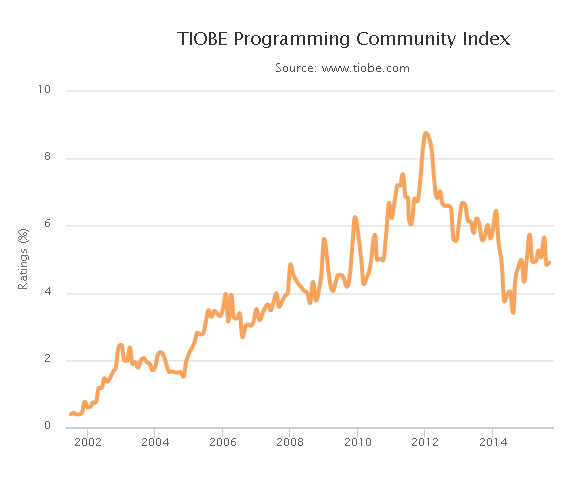 C# Has its Ups and Downs

C# is a core language for many in the Codeguru crowd. While the Tiobe index could imply that C# has peaked, time will tell if this is true. Like Java, in the last few months, C# has also jumped up after a big dip.

PHP is used by a large number of people for web development. If you review the Tiobe data, you’ll see that it holds the number 6 position in September, which is up from 7th last year. In the past year, its popularity has been holding somewhat steady, but it is way down from where it was earlier this decade.