What Are Command Links?

Command Links are a new thing in Vista. If you aren’t familiar with them, they look like the figure below. You can find additional information here.

A Command Link essentially has two parts: the main text and a note, as shown below.

A Command Link, as a matter of fact, is not a new class of control . It is just a new style for the BUTTON class. One can make a commonly used button control look like a command link by adding the BS_COMMANDLINK style. The Vista UI guidelines suggest one to use Command Links as a means of conveying additional information related to the specific commands.

In Visual Studio 2008 (beta 2 is available for download now), MFC has been enhanced to accomodate the new Vista features. The MFC classes are now in sync with Vista’s demands. Thus, the following member functions have been added to CButton class w.r.t. Command Links:

These probably are self explanatory for those familiar with MFC’s function naming convention. In addition, the resource editor toobox has been enhanced to reflect the new controls. See below: 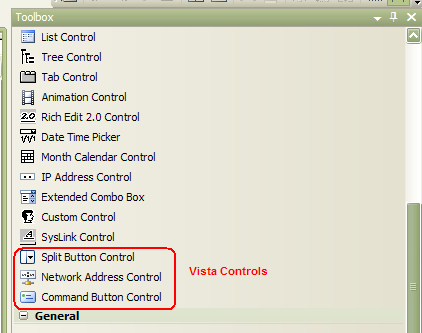 Note: Before proceeding, make sure you have downloaded and installed Visual Studio 2008 beta 2, if you have not done so already.

Application developers often write applications that are targeted for multiple operating systems. In typical deployment scenarios, it is not uncommon to have a single binary targeting multiple versions of the operating systems. This situation demands that, as an application developer, one tries to cut down on features that aren’t commonly available on all of them, or, if it all possible, one will attempt to have some workaround to make them functionally identical even though, under the hood, there will be platform-specific code dealing with all those limitations.

This practise becomes even more challenging on the user interface side, wherein applications are required to have the best UI, and a common UI across all platforms because it directly relates to how the user interacts with the software itself. Any differences in the look and feel or behavior can lead to slow adoption of the software by customers, increased customer support calls, and so forth.

Often times, most software applications also ship with offline user guides. This means a uniform look and feel is a must; otherwise, it will have an impact on maintainence of different versions of the guides catering to different scenarios.

How does it all relate to Command Links? Simple. Command Links aren’t available on platforms earlier than Vista. So, how does one go about having an application that is more user-friendly with command links, but one that also has a similar functionality on pre-Vista platforms?

The problem will be even more evident if one creates a sample MFC dialog project with Visual Studio 2008 (uses MFC 9.0), drops a command link on the dialog resource, builds, and runs it. If your development environment is pre-Vista, you will see that the Command Link is simply not visible. It does appear when you run the same application on Vista.

I call this a workaround, because it is no more than that. It is not a complete solution. A complete solution would mean identical behavior on pre-Vista, but that is like rewriting the control itself. The workaround discussed enables the software to use the command links that come with Vista, but degrades gracefully to provide, if not the same experience, a similar experience on pre-Vista platforms without going overboard trying to do so.

The problem discussed in the earlier section was that, on pre-Vista platforms, the common control DLL cannot interpret the BS_COMMANDLINK style. It doesn’t seem that Microsoft has any intention on making them available on newer commctrl.dll for pre-Vista platforms anyway. However, the Command Link button is a pretty simple one. Perhaps there is a way to get at least a similar functionality on pre-Vista platforms?

Let me dig a little deeper. Okay, you know that the BS_COMMANDLINK style doesn’t help much. What if you leave the style as is on Vista platforms, but remove it for non-Vista platforms? That should work, because then it is a regular button control.

There are a couple of ways one can do this:

It’s time to get started. If you do not have the project yet, crank up a dialog-based MFC project from within VS2008, accepting all defaults. Drop a “Command Button control” onto the dialog. Build and run. For the purpose of this article, you will use a pre-Vista platform for testing (because on Vista platforms, it should just work). You will see a dialog with OK and Cancel, but no Command Link button.