Enabling Students to Start Their Own Tech Ventures

Editor’s Note: The following is contributed story about what is happening in technology with some of the younger, high school aged generation.

Amit Kochavi, an 18-year-old entrepreneur from Tel Aviv, did not want to wait until after his military service to get a foothold in Israel’s startup ecosystem. And he doesn’t think any teenager with high-tech ambitions should have to wait, either.

Now with more than 40 mentors on board, Tech Lounge expanded last year to Ironi Tet High School in Tel Aviv, the Hebrew Reali School in Haifa and a high school in Los Angeles, the city where Kochavi is interning at FastPay as a software engineer before going into the IDF.

About 120 students signed up this year, and he predicts 80 will complete the accelerator—not a bad percentage considering the heavy demands of high school.

“Students who participate in these accelerators get the tools, knowledge, and experience that are needed to get started on their way in the Israeli innovation world,” Kochavi states. “During the four months, they meet twice a week with mentors from the high-tech world—investors, engineers, marketing and design people, the whole spectrum—and slowly develop themselves to the point where they have a business presentation and whatever they need to pursue it on their own. By getting exposure to people who have done it before, they build great connections and have a lot of opportunities for access to professionals.”

On March 3, Tech Lounge launched a four-month pilot program that will give about 50 chosen participants hands-on mentoring in programming, marketing, design, and entrepreneurship from alumni of Israel Defense Forces technology units. Kochavi designed this new program with Sharin Fisher, co-founder and former CEO of Gvahim-Israel Formal Cyber Education Program for gifted science and technology high school students. Although Israeli teens must serve in the military or national service between high school and college, Kochavi believes Tech Lounge and the new program with IDF veterans can make a big difference to those who decide to enter high-tech entrepreneurship several years down the road.

“I think it’s important because if you don’t start before the army you lose some traction. This gives them an extra three years of experience and helps them focus on what they can and want to do later in life,” he says.

Amit Ilan, a Gymnasia Herzliya senior, states that he learned about Tech Lounge from his computer science teacher and joined with two friends to advance their idea for an app to help solve parking problems in Tel Aviv.

“Every week we had meetings with people from the high-tech industry and they told us how to build an idea and how to talk with investors,” says Ilan. “We had one meeting with [Tel Aviv] Mayor [Ron] Huldai and discussed our idea with him. He said it is not such a good solution because the technology would be too expensive. Still, my group learned a lot from this project for the future. I hope to do something with computers in the army and then get into a big company or a startup.” 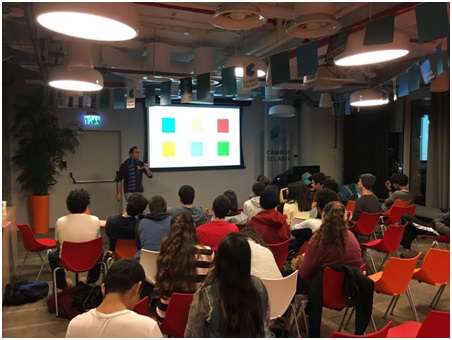 No Such Thing as Impossible

Kochavi, a startup entrepreneur since the age of 14, graduated from Gymnasia Herzliya with a concentration in physics, computer science, and computational science. He took university extension courses throughout high school and took part in the Tech Loft Incubator in Tel Aviv. He was one of 120 students chosen for Israel’s LEAD Ambassadors two-year leadership-training program, and it was in this context that he started Tech Lounge. In the future, he wants to take it off campus into one or several central Israeli locations, and establish Tech Lounge in the US and other countries. He is working on a mobile platform to connect young entrepreneurs to mentors all around the world. 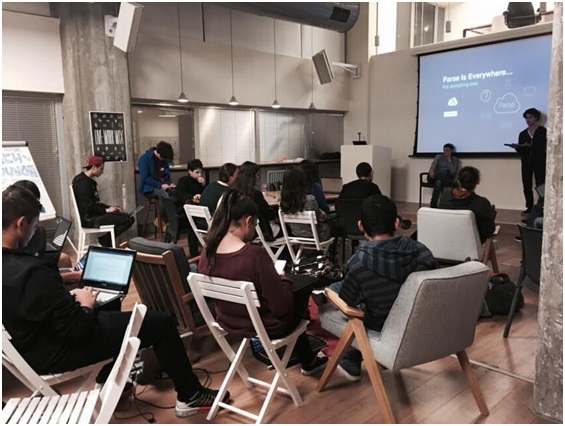 One of the Tech Lounge mentors, Nathan Intrator, currently on leave from a professorship in computer science and neuroscience at Tel Aviv University to nurture his brain-health startup, Neurosteer says Tech Lounge participants are of an age where they aren’t yet aware of limitations.

“I love talking with very young, enthusiastic, serious, unbiased bright kids. Sometimes, they don’t know there are things that are considered impossible to be done and they just do them,” he marvels.

“These kids are mastering the wave of new technology and simply utilizing it. It’s fun and exciting,” Intrator continues. “The goal is to drive their curiosity and enable them not to be afraid, to really explore new directions even if it looks very hard and at the same time not make novices’ mistakes in the business aspects of the project.”

Read more
Previous articleBase64 Encoding from C#
Next articleMixed Reality: The Competition Heats up with the Meta 2