Tag Image File Format (TIFF) files are used for a diverse set of applications such as GIS (geographic information systems), CAD drawing programs, graphic arts, and so forth. Fortunately, a portable library is freely available, from www.libtiff.org, for decoding the information stored in TIFF files. The library also provides software tools that can be extremely helpful for common graphics programming tasks. The rest of this article takes you through the steps required to incorporate the TIFF library into your C++ projects.

JPEG images need no introduction due to their widespread use on the Web, but let’s suppose you are a poor student and you don’t want to pay for an image library; what other possible avenues exist for supporting JPEG images? The answer: another free library available publicly on the Web. This article just wouldn’t be complete without incorporating a free JPEG image library.

If you’ve been working with Windows for a while, you probably have lots of BMP files on your hard drive. Working with BMP files has been well covered on CodeGuru and I see little advantage to providing another implementation. On the other hand, it would be nice to have a complete image library for Windows and it can be frustrating when an article almost covers a topic but leaves out one important aspect. So, I’ll include a brief section on BMP files as well.

The original article was titled “Working with TIFF Images” and the TIFF library is really the motivation for re-writing that article. Of course, there are always comments such as “Why don’t you support format X?” so this revision includes support for more formats, but the TIFF library has really come a long way, especially in the area of the tools that are included with the library and extensions to the library. Unfortunately, there is not enough time to go into each of the TIFF tools, so only the PDF conversion tool is highlighted. A particular extension to the TIFF library will be covered shortly with an article on GeoTIFF images. GeoTIFFs are geographically referenced images, typically the result of a satellite or aerial photo. Stay tuned for more on handling GeoTIFF files.

So, this article covers the following topics:

Working with the TIFF Image Library

If you download the TIFF library from www.libtiff.org, you will have to spend a little time dealing with make files; however, my sample project already has the VC++ project files set up. Using the project files provided in the sample means that you may have to make modifications when new versions of the library are released. The library was written in C and contains all the code necessary to encode and decode TIFF image files. For an application programmer, all that is necessary is to call the appropriate functions from the library.

So, before working with the sample application, open the provided project files for libtiff and tiff2pdf and build them: first libtiff, and then tiff2pdf. For the libtiff project, build both the debug and release mode versions. The debug build produces libtiffd.lib and the release build produces libtiff.lib. For the tiff2pdf project, you may build either the debug or the release version, but there is no need to build both. Once these projects have been built, move the tiff2pdf.exe file from its release folder to the application folder. The application process will pull in the files as needed. Here is the folder structure for the libraries and application: 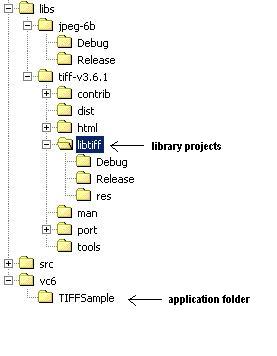 Loading a TIFF image into a device independent bitmap

The logic necessary to load a TIFF image from a file into a DIB is trivial due to the presence of the TIFFReadRGBAImage library function. This function does the work of converting the underlying file format into a rectangular RGBA block of data. It’s tempting to say, okay we’re done. But that would be selling the library short. Another property of TIFF files is that they can contain more than one image, so a single TIFF file can actually behave like an archive for numerous images. Typically, this may be used when someone has several related images (for example, blueprints showing different angles of a single structure). In that case, it might be more convenient to save them all to a single TIFF file. If you ignore the directory structure of a TIFF file and simply open the file and use the functions to read the data, all that will happen is you get the first image. In most cases, the first image is the only image, but sometimes there are more. The following outline describes the process of reading the first image from the image file. The project contains more code for handling cases easily where a TIFF image file contains multiple images.

The following code sample implements the approach outlined above:

Saving a DIB image to a TIFF file is essentially the reverse of opening an image file. The following code snippet provides a simplistic implementation of the process.

The TIFF library comes with a convenient tool for converting TIFF images into PDF format. Because we now have the ability to save a DIB image as a TIFF file we can essentially convert any image into a PDF file. This fantastic capability is accomplished by another C function provided with the TIFF library called tiff2pdf. For the sample project, I choose to build the tiff2pdf function into a separate executable and launch the executable from the application.