Till now, you have had to run your unit tests manually or automatically after each build. With this new feature around, you no longer need to wait till the build gets generated. You need not even save your source code file—as soon as the code changes, the associated unit tests would start running in the Visual Studio 2017 IDE.

Live Unit Testing is integrated with the Test Explorer and can be configured using Tools->Options->Settings in the Visual Studio 2017 IDE. You can start, stop, or pause Live Unit Testing easily while you are working in the IDE. You also can view the code coverage details and navigate easily to the test that has failed.

Here’s what Microsoft states 1: “Live Unit Testing automatically runs the impacted unit tests in the background as you edit code, and visualizes the results and code coverage live, in the editor, in real-time. In addition to giving feedback on the impact that your changes had on the existing tests, you also get immediate feedback on whether the new code you added is already covered by one or more existing tests.”

To work with Live Unit Testing in Visual Studio 2017, follow these steps.

This would create a new unit testing project in the name you specified. Next, double-click the “UnitTest1.cs” file in the Solution Explorer window. Now, replace the TestMethod1 unit test method with the following code. 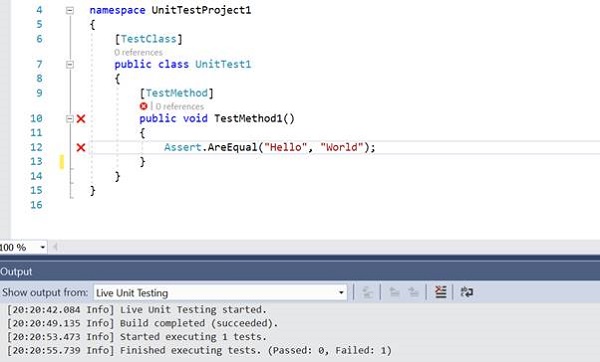 Let’s now write another unit test method—one that would pass. Refer to the test method code that follows.

As soon as you restart Live Unit Testing (assuming that it was stopped while you were writing the unit test method), the tests are both executed—one of them fails and the other succeeds. Here’s how the output looks when both the unit test methods have been executed. 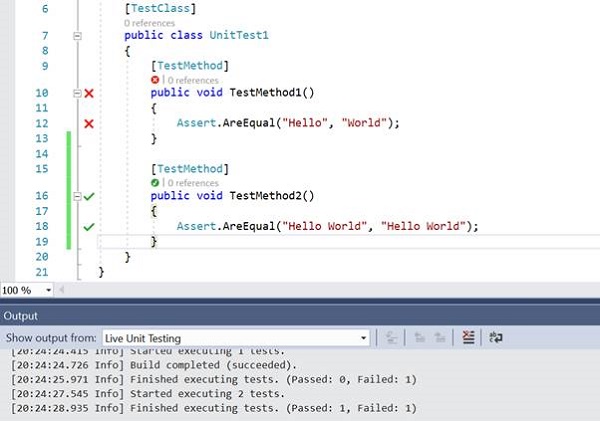 Figure 2: Live Unit Testing in action—one of the tests pass and the other fails

You can learn more on Live Unit Testing in Visual Studio 2017 from this article.

Facebook
Twitter
Linkedin
WhatsApp
ReddIt
Joydip Kanjilal
A Microsoft Most Valuable Professional in ASP.NET, Speaker, and Author of several books and articles. More than 25 years of experience in IT with more than 18 years in Microsoft .NET and its related technologies. He was selected as a Community Credit Winner at http://www.community-credit.com several times. He has authored 8 books and more than 500 articles in some of the most reputed sites worldwide including MSDN, Info World, CodeMag, Tech Beacon, Tech Target, Developer, CodeGuru, and more.