Modern web applications rely heavily on client side
scripting to provide rich user experience. To that end ASP.NET AJAX and jQuery are popular choices amongst ASP.NET developers to render rich user
interface. These libraries make use of client script physically stored in
JavaScript (.js) files. When a client accesses a web form that makes use of
these libraries the client browser first needs to download the required
library files on the client side and then execute the client script.
Developers often store these JavaScript files as a part of their web site and
then refer to them in various web forms. Though this approach works, it’s not
the best approach to make use of such client side libraries. That is where Content Delivery
Network or CDN comes into picture. As an ASP.NET
developer it would be nice to know what a CDN is and how Microsoft
Ajax CDN can be used in ASP.NET web sites to refer ASP.NET AJAX and jQuery
files. The remainder of the article discusses these concepts.

A Content Delivery Network or CDN is a network of servers
situated at key locations across the globe. This network maintains cached
copies of files that are to be delivered to the client. When a client tries
to access any file that is being maintained by the CDN, the server nearest to
the requesting client fulfills the request. This technique is known as Edge
Caching since the servers towards the "edge" supply the content.

Microsoft’s Ajax CDN hosts frequently accessed library
files such as ASP.NET AJAX and jQuery so that they are served by the CDN and
not by your web site. Using CDN can improve overall performance of your web
forms since client script libraries are downloaded by the client browser from
the nearest location. Microsoft Ajax CDN can be accessed at ajax.aspnetcdn.com and can be used for
referring ASP.NET AJAX and jQuery files. A sample <script> block that
refers jQuery library from Microsoft Ajax CDN looks like this:

In order to understand how using CDN can be beneficial to
your web application, let’s assume that you have a web server located in the
US. Your web site developed in ASP.NET is hosted on that server and is using
ASP.NET AJAX and jQuery libraries. Now let’s further assume that clients from
India are trying to use your web site. Without any CDN in the picture, all
requests for the ASP.NET AJAX and jQuery libraries will be served by the
single web server located in US. The files needed by the clients from India
will be downloaded all the way from the US based web server. 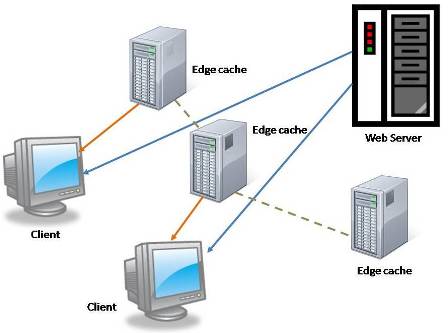 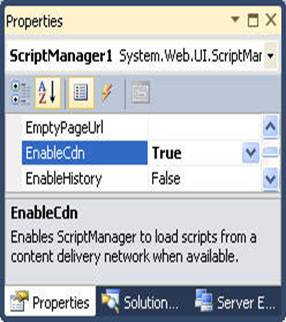 If you see the HTML source of the web form after
configuring the ScriptManager control to use Microsoft Ajax CDN, you will
find script blocks as shown below:

Note that initially Microsoft Ajax CDN used to point to
ajax.microsoft.com but now it has been changed to ajax.aspnetcdn.com. Though
the former domain still works it is recommended to use the later domain in
your websites.

A CDN is a network of servers situated at key locations
across the globe that serves cached copies of frequently accessed files.
Microsoft Ajax CDN can be accessed at ajax.aspnetcdn.com. Using Microsoft
Ajax CDN for ASP.NET AJAX and jQuery files can considerably improve the
overall performance of your web site since the frequently accessed script
files are served by edge cache servers located near the client end. A list of files hosted in Microsoft Ajax CDN can be found here.

Bipin Joshi is a blogger and writes about
apparently unrelated topics – Yoga & technology! A former Software
Consultant by profession, Bipin has been programming since 1995 and has
worked with .NET framework ever since its inception. He has authored or
co-authored half a dozen books and numerous articles on .NET technologies. He
has also penned a few books on Yoga. He was a well-known technology author,
trainer and an active member of Microsoft developer community before he
decided to take a backseat from the mainstream IT circle and dedicate himself
completely to spiritual path. Having embraced Yoga way of life he now codes
for fun and writes on his blogs. He
can also be reached there.