Understanding and Using Gestures in Your Windows Phone Applications

Let us get hands-on and create a simple Silverlight based
Windows Phone application that handles gestures.

Add a TextBlock on the MainPage.xaml.

Now, go to the properties for the MainPage.xaml and double
check the event called ManipulationDelta to create the event. 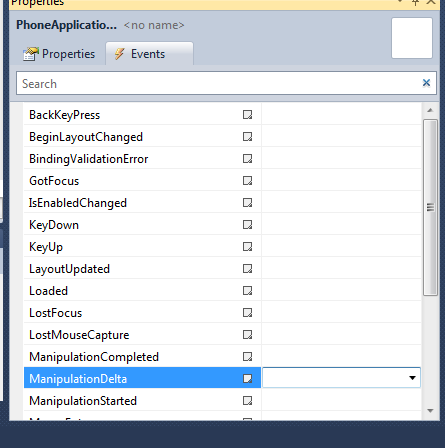 Add the following snippet in the code for the event.

In the above snippet, we are printing the manipulation delta
from the last time the manipulation was executed. So, if we move our finger
across the screen in short burst, we should see the TextBlock being updated at
short intervals and at each update, it provides the delta in the movement of
the finger.

Compile and run the application. In the emulator, scroll the
mouse with the left button clicked to fire the events that update the
TextBlock.

In this article, we saw how we can handle gestures in our
Silverlight based Windows Phone application. I hope you have found this
information useful.