If you’ve been using ASP.NET for any length of time then you’ve almost certainly utilized the
DataGrid Server Control. And I’m sure a good portion of you have probably played with the
DataList as well… after all, not all of our tables can only have one item per row. But what
about that other data web control? I’ve got a friend who probably will kill me for using
this analogy, but it’s sort of like the three tenors… there’s Pavarotti, Domingo, and
that other guy (his name is actually Carreras, but you get my point). Well the other guy
in this case is a great little control called the Repeater. While the repeater may not be
as well known as or have all the bells and whistles of the other controls, it does have something
that neither of the other two has: flexibility.

Why do I say the Repeater is the most flexible of the three data web controls? Because
it’s the only one that doesn’t add a bunch of its own HTML to your data. If you want just the plain
data spit out on the page you can easily get it.
Try and do that with either of the other two and
you’ll quickly find that you’re simply out of luck.
If you want some sort of fancy custom HTML, that’s no problem either.

The reason the Repeater is more flexible then the others, is that both the DataGrid and the
DataList are based upon the HTML table element, and while there’s
nothing wrong with that, it can somewhat limit your (or your designer’s) creativity when it
comes to displaying your data. The Repeater is not limited to rendering a table. You can
use it to output any type of formatting you choose using as little or as much of your own
custom HTML as you please.

Unfortunately, all this flexibility does come at a cost. The Repeater does not have the
built in selection or editing support of the DataGrid and DataList. You can write your own, but
it will add to the amount of code needed for your application. If you don’t need
the additional abilities, then you’ve lucked out and gained the flexibility of being able to use
your own HTML without having to write this extra code.

To keep things brief… I’m only including the actual Repeater controls in the code listing below.
The code I use to create the DataTable and the code that does the actual databinding are
contained in this article’s download.

I’ve included four repeaters on the page, and they all use the same set of data.
The first simply displays the data in a comma-delimited format with one record per line. The
second repeater uses the data to build an HTML unordered list of links with each record
representing one list item formatted to produce an HTML link. The third is very similar to
the second with an AlternatingItemTemplate and SeparatorTemplate thrown in for illustration.
The last repeater uses the image data to build an HTML img tag to show images instead
of text for the links. In this case I use the site name as the alt attribute of the img tag.

Here’s the result. Now remember that all 4 are built using the exact same data: 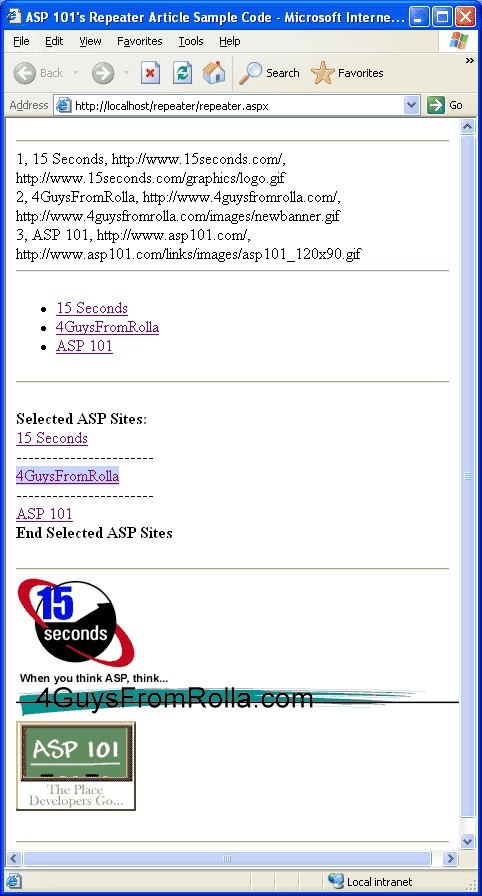 You can download the complete code below (which naturally includes all the code listed above).