Longhorn is the codename for the next version of Microsoft’s Windows operating system. Although not slated for release until 2006, Microsoft released evaluation builds of the software in October 2003 so developers could test it. Based on the feedback from the developer community, Redmond released a new build (4074) during Windows Hardware Engineering Conference (WinHEC) in May 2004. This article examines some of the cool and interesting features of this new build. Because the content and screenshots this article provides are based on a pre-release build, they are subject to change in future versions.

I installed Longhorn on my Pentium IV 2.8GHz Toshiba laptop with 512MB of RAM. I performed a clean installation on a separate partition of my hard drive, because I planned to keep my preexisting Windows XP OS intact. I found Longhorn’s setup process much more user friendly than those of Windows XP and Windows 2003. The whole process still took around 45 minutes because the setup swallowed around 15 minutes just detecting hardware. During installation, the setup automatically restarts several times and you need to manually enter “-“along with the product key. After the installation, I was able to successfully boot both my operating systems by selecting the relevant options.

Longhorn’s user interface was built under the codename “Aero,” and its graphics were developed under the codename “Avalon.” Avalon introduces a new procedural graphics markup language called XAML to Windows. With XAML, you can create pages with user interfaces that have a new look and feel. You need only install the Longhorn software development kit (SDK) to work with XAML.

Note: It is not necessary to install Longhorn SDK to work with XAML, but the kit is required for compiling C# or Visual Basic .NET procedural codes included with XAML applications.

Raising the Bar on the Taskbar and Sidebar

The Longhorn desktop interface is comprised of a taskbar (see Figure 1) and a sidebar (see Figures 2 and 3). The sidebar is situated on the right side, and you can remove it to increase the screen size by clicking the arrow icon on the bottom portion.

You’ll notice from Figure 1 that the taskbar has no caption for the “Start” button. You can easily customize the taskbar by right-clicking it and choosing the Properties menu item. As of this build, your only option is placing the taskbar on the top portion of the sidebar.

I broke the sidebar into two separate figures for more clarity. As you can see from Figures 2 and 3, the bar features lots of stuff, including a new clock and some useful icons. It also automatically displays the power status of your system/laptop (if it’s running on batteries) and offers icons for other hardware devices. For instance, Figure 2 shows an icon for the connected external floppy disk drive next to the Windows Messenger icon. You also can completely hide the sidebar by deselecting the option “Enable the Sidebar” from the Taskbar’s Properties dialog. Its contents will appear as usual on the bottom right portion of the desktop (like in Windows XP). The sidebar is a really cool Longhorn feature. Explore it if you get a chance.

The sidebar also displays live RSS feeds as shown in Figure 2. It randomly displays two feeds at a time. You can further customize the options by right-clicking the feed area and selecting the option “News Feed Tile Properties.” Moreover, you also can enable the slide show option by right-clicking the sidebar and choosing the Properties menu item (see Figure 4). This will enable you to simultaneously view all your cool vacation pictures while browsing the Net or performing some other work.

Time to Rethink the System Clock

Longhorn ships with a new version of the system clock. When you click on it, an enlarged version displays (see Figure 5). 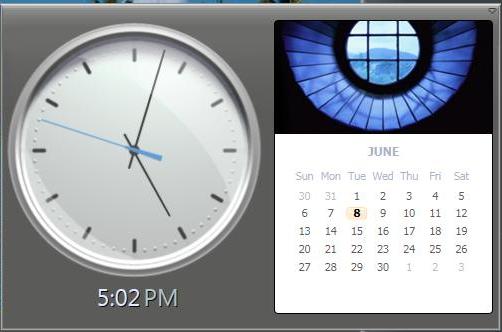 You can further modify the clock settings by right-clicking it on the sidebar and selecting the “Clock Tile Properties” option. For instance, you can choose the appearance of the clock from a list of provided faces (see Figure 6). 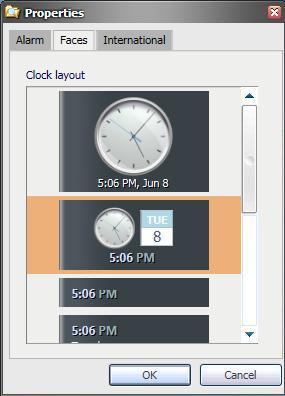 You can set an alarm by selecting the Alarm tab from the properties dialog shown in Figure 6. You can choose any time between 12.00 a.m. and 6.00 a.m. as well as the song you want played at that specified time (see Figure 7). 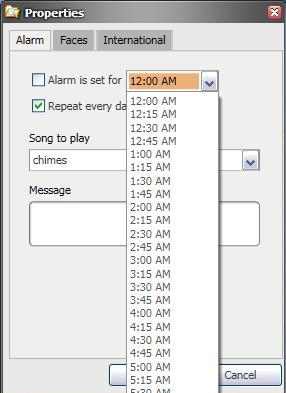 It also offers an option for entering a message. If you are eager to check it out, modify your system clock (as I did) and then play with the alarm.

Dialogs Get a Facelift

Longhorn dialog boxes come with new faces. For instance, Figure 8 shows a typical Save As dialog. 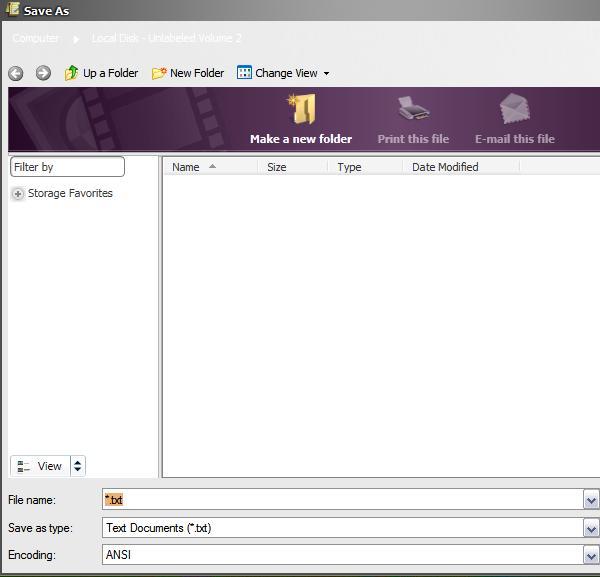 Note: The “Make a new folder” option on the dialog shown in Figure 8 doesn’t work in this build of Longhorn.

You probably noticed the option for e-mailing and printing a file directly from the dialog box. Longhorn e-mails the selected file to the recipient as an attachment (see Figure 9). 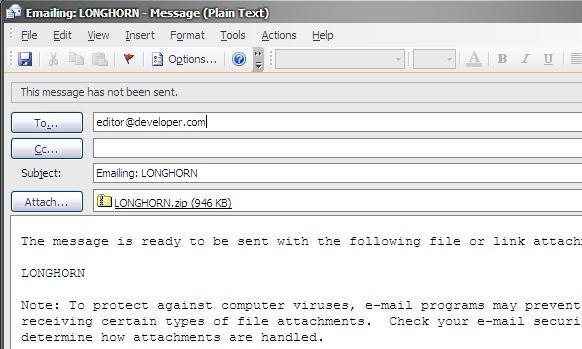 Figure 9: Preparing to E-mail the File

As you have seen, even in its nascent stages, Longhorn offers interesting new features. As its development progresses, Microsoft will add more cool enhancements to the product.

Stay tuned for the next article in this series.