In particular, you Unit Test to exercise all your code and verify that the relationships among all parts of your code, at present, and in the future; adhere to what you originally intended. Here are some sample scenarios.

Unit Tests can be configured with a whole range of data sizes and shapes, at the very edges of what is allowed in the database. An application may not exceed size limits in a database until it is ported to, for example, a new language. Often, a developer will not be aware that a stored procedure parameter is bigger than a particular field it is writing to a table until the upper limits are reached.

Unit Tests serve as living documentation and may answer questions like: How you intended to use a Stored Procedure? and How fast should a particular query execute?

Building on the AdventureWorks sample project from my prior article, I’ll unit test a modified version of the uspLogError stored procedure.The code appears in Figure 1.

I commented out the ERROR_NUMBER() check, allowing the code to continue execution with or without an error. I also modified the Error Log to include the Database Version in the error log code.

Adding a test project is straightforward; simply add a project to the solution. Select a Test Project from the Project templates dialog (see Figure 2). 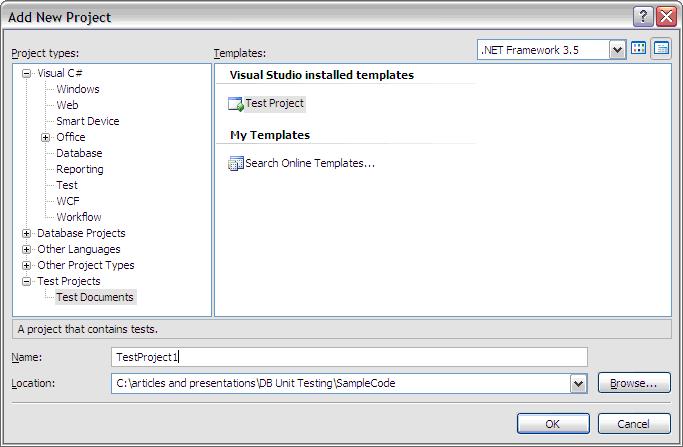 Aside from adding the project to your solution, Visual Studio adds some additional solution components separate from the project (see Figure 3).

The files control your testing experience and allow you to configure more complicated testing scenarios. Neither of these files will be part of this articles demonstration, but you can find more details in the resources at the end of the article.

The test project appears in Figure 4.

The project is created with a default Manual Unit Test and a blank Automated C# Unit Test. These files can be deleted, but I’m leaving them in so you can see how tests are grouped and execute alongside each other later in the article. The AuthoringTests.txt file explains how to navigate the project and how to configure some of the Unit Testing options.

As you can see, I’ve created a Test project for Database Unit testing, but there are no Database tests in the project, so I’m going to add one and configure it to test my TSQL code. 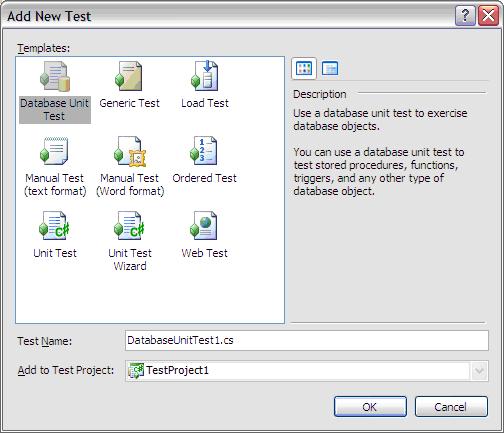 Because I’m creating the first Database Unit Test in the project, I’ll be prompted to set database configuration information for the whole project. You must at least select a database connection to configure a project. As you can see in Figure 6, for simplicity, I selected the database maintained by the AdventureWorks database project. Therefore, as I change and edit the project the underlying database I’m using in the unit test will also change. 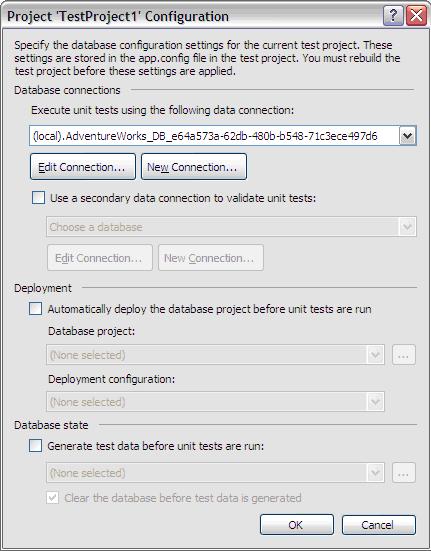 A database unit test can be quite sophisticated. Later in the article, I’ll show you how to include data in your test. More advanced testing scenarios, though, are beyond the scope of this article.

Once you complete the configuration information the Database Unit test will look much like the test shown in Figure 7.

Most likely, you’ll need to operate on some data to execute your tests. So, before I develop the Unit Test, I’m going to create some sample data and later incorporate the data in the Unit Test.