C# 3.0 incorporates LINQ (Language INtegrated Query), a cool technology that adds dynamic queries to all kinds of objects in a familiar SQL-like style. LINQ code looks like embedded SQL statements, which I actually don’t care for because SQL has never looked pretty to me. I also do not believe that LINQ adds clarity to code. It looks terse and somewhat ambiguous. In a nutshell, LINQ is a sexy technology (as they are fond of saying in Redmond), but it is not pretty.

This article shows you how to get LINQ for Visual Basic and begin using it now. As you read, you can begin formulating your own opinion of its elegance and usefulness.

Begin by downloading and installing LINQ. This article uses the May 2006 CTP (Community Technology Preview).

Tip: If you like bleeding-edge technologies and want to know what Microsoft is working on for future products, check out research.microsoft.com. LINQ, for example, came out of the Omega research project.

As with all pre-release software, you download and install with some risk. In this case, LINQ will cause minor problems with IntelliSense and CodeRush. If you rely on CodeRush, Refactor, and IntelliSense, then install LINQ on a Virtual PC instance with Visual Studio 2005 on it.

Working with the LINQ CTP

Once you have downloaded and installed LINQ, you will notice a new folder named C:\Program Files\LINQ Preview. This folder contains LINQ documentation, assemblies, and examples. When you run Visual Studio after installing LINQ, you will get a message indicating LINQ for C# is installed, but LINQ for VB also will be installed.

To use LINQ and create a project, pick one of the LINQ project templates as shown in Figure 1. These project templates will add the appropriate references to LINQ assemblies and any necessary import statements. 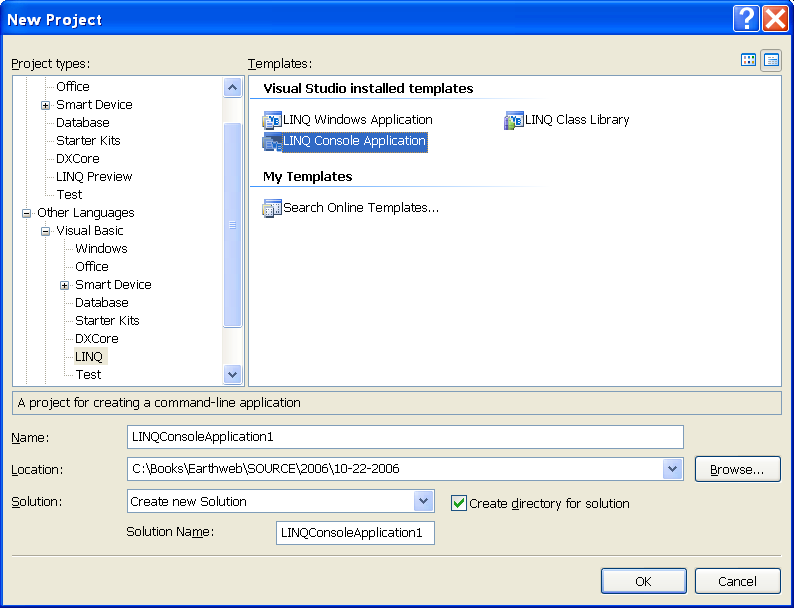 All of the samples in this article are part of a console application, and the referenced assemblies—including Microsoft.VisualBasic.LINQ, System.Data.DLinq, and System.Xml.XLinq—will be added to your project’s list of references (see Figure 2). In fact, LINQ is supported for ADO and XML too. 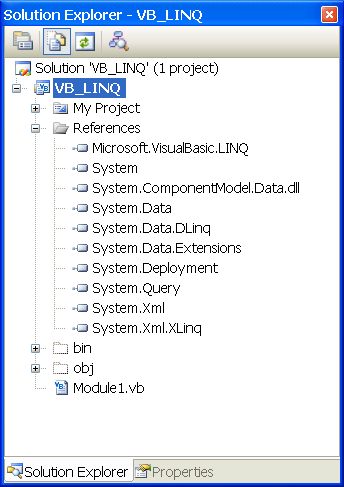 Tip: To view the references in a VB project, click the Show all files button (highlighted in blue in Figure 2) in the Solution Explorer.

Having installed LINQ, let’s look at some of the things you can do with this technology.

LINQ is a query language for .NET—VB in the examples to follows. To be useful and intuitive, I would expect LINQ to do almost everything SQL can do. Although I didn’t test its limits, LINQ proved pretty intuitive as I developed the examples. I literally guessed at them based on what I anticipated from a query language. The following sections discuss some of the queries you can write with LINQ.

Selecting Numbers from an Array

LINQ for VB looks a little like reverse polish notation for SQL. For example, you can define an array of integers and then query that array using a WHERE predicate to return a subset of integers from an unordered set. Listing 1 shows a VB subroutine that does just that with a subset of fewer than 10 integers.

This example defines an array of random integers. The LINQ query (shown in bold) defines an anonymous type lessThanTen, which becomes an instance of IEnumerable. (Anonymous types are much more spectacular to C# programmers; you VB programmers are used to this type of notation.) The LINQ query From num in numbers Where num < 10 Select Num initializes lessThanTen. And, of course, most of us know by now that any IEnumerable type can be used in a For Each statement. The result from Listing 1 are the numbers 1, 2, 5, and 8 printed to the console.

Notice that numbers uses an array initializer without explicitly declaring numbers as an array (using numbers()). The variable numbers‘s type is an anonymous type whose actual type is inferred. The same is true of the anonymous variable n. (Note the unusual location of the keyword Dim in the For Each statement. This is valid .NET 3.0 code.)