How To Use Choosers in Your Windows Phone 7 Applications

As we saw in an earlier article
describing Launchers, the Windows Phone
7 platform does not provide any application direct access to the contacts, send
email or take pictures features of the phone. This is done to provide
sandboxing. However when applications have a legitimate need for doing so, they
can access these features via some helper APIs. When there is a need for output
from such platform specific tasks, we use Chooser APIs, which are provided by
the Windows Phone 7 platform.

Choosers are a set of APIs that launche one of the built-in
applications by which users can complete a task for which the Windows Phone 7
platform provides a native application. In addition to doing the task, a
Chooser API also returns a value, which is used by the application to determine
business logic. An example would be selecting a phone number.

There are various Choosers available with Windows Phone 7:

Let’s look at how we can use these Choosers in an
application. 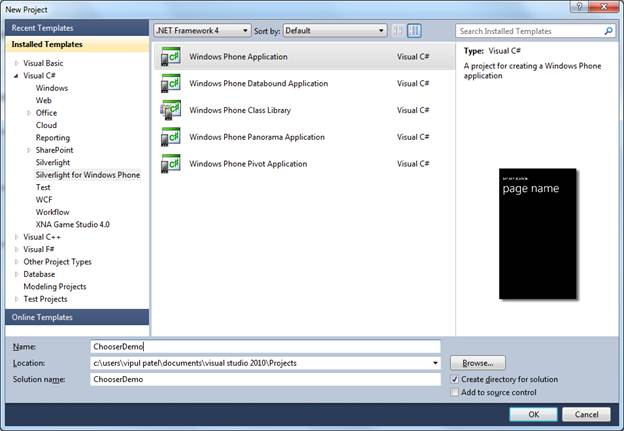 Add a button with the text “Choose Phone number”. Also add a
text box on the MainPage.

In the MainPage.xaml.cs, add a reference directive for
Microsoft.Phone.Tasks namespace.

In the class for the MainPage, declare an object of type
PhoneNumberChooserTask.

In the constructor for MainPage class, instantiate the
PhoneNumberChooserTask.

Wire a method called phoneNumberChooserTask_Completed on its Completed
Event.

On the button click event, add the following code.

Now, lay out the phoneNumberChooserTask method. In
this method, update the textbox to show the phone number ifB a contact is
selected.

We are all set. Go ahead and launch the application. If you
are having issues compiling, you can grab the source code of the demo, which is
referenced in the resources section of this article.

When you click the “Choose Phone number” button, the address
book opens up and once you choose a contact from that, it automatically fills
the textbox on the MainPage with that contact’s phone number.

You have successfully used the Chooser feature of Windows
Phone 7 platform. As simple as that.

In this article, we learned how to use Choosers API.B

Vipul Patel is a Software Engineer currently working at
Microsoft Corporation. He is currently working in the Office Communications
Group and has worked in the .NET team earlier in the Base Class libraries and
the Debugging and Profiling team. He can be reached at [email protected]